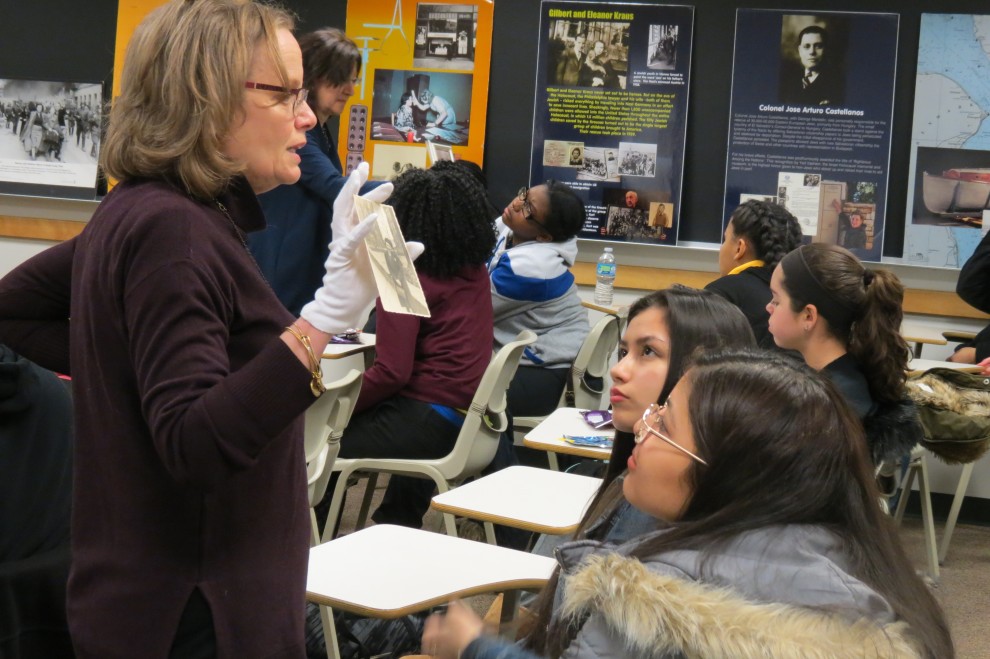 At 4:30 p.m. on March 3, a group of 40 high school students settled into their seats at Lehigh University, preparing to listen to a presentation by Shari Spark, director of the Jewish Federation’s Holocaust Resource Center.

“Excuse me,” one of the students said, standing up. “I would just like to ask that out of respect for the subject matter we’ll be hearing about today that everyone could please turn off their phones. I think it’s important that we really listen.”

For the next two hours, they did just that. Respectfully listening and interacting with the materials that make up the HRC’s Legacy Exhibit. The HRC is dedicated to Holocaust Remembrance through education, preservation of primary sources, and outreach to present and future generations in the fight against hatred and bigotry. A collection of over 1,000 books, visual and audio media, curricula, artifacts and art dealing with the subject of the Holocaust and the times and circumstances around it, as well as books and curricula dealing with anti-Semitism, hate crimes, genocide and overcoming oppression are available to the public.

The students were there as part of Strive, a Lehigh Valley nonprofit that seeks to encourage underprivileged high schoolers to stay in school and helps them to plan their post-high school educational and career goals.

The HRC has been taking its Legacy Exhibit into area schools for years, but this was the first time the vast majority of the students at the program had ever interacted with artifacts from the Holocaust. Spark detailed the story of the Holocaust through objects like passports and newspapers from the time period, detailing the escalation of the persecution of the Jews from World War I through World War II.

That evening was also the first time that many of them had ever met a Holocaust survivor. Marcel Guindine told the story of his childhood in Nazi-occupied France. Guindine’s father, a French soldier, was away for the entirety of the war, and his grandparents abandoned his mother in Paris once the Nazis invaded. Guindine’s mother managed to hide her son and protect him through incredible self-sacrifice, remarkable courage, and plain luck. “I was incredibly lucky to survive,” Guindine said. “We had many close calls, but each time, we were somehow spared.”

Eventually, Guindine’s mother was forced to give her child up to the Red Cross, claiming he was an orphan in order to get him out of the city and into safety. Guindine spent nearly a year living with a French family in a small village, where he was welcomed with open arms and enjoyed the benefits of living with a family of French bakers. Meanwhile, his mother was taken to a labor camp.

After the liberation, Guindine’s mother moved heaven and earth to relocate her son. Seventy years later, he teared up as he remembered the moment she found him again, admitting he had all but forgotten her, but she had never stopped thinking of him.

Jousette Cruz, a student at William Allen High School, was moved by the experience. “It was enlightening,” Cruz said. “I found myself picturing the stories he was telling. You hear a lot stories about the Holocaust, see a lot of movies and read a lot of books, but it’s different when you’re face-to-face with someone telling their own story. I will definitely be more sensitive to the subject now, knowing what Marcel has been through.”

Join the Holocaust Resource Center on Wednesday, May 4, at 7 p.m. at the JCC to hear stories from local survivors and honor the 6 million Jews lost. To learn more, contact Shari Spark at hrc@jflv.org or call 610-821-5500.