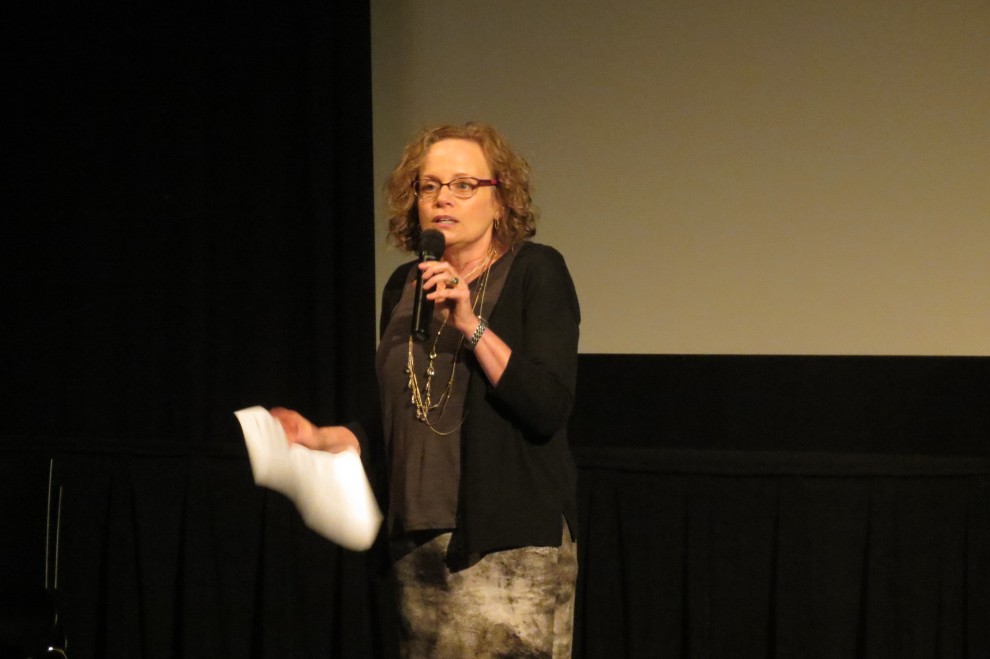 Before the lights dimmed for the Lehigh Valley premiere of the feature film “Denial” on Oct. 20, Shari Spark wanted to put what the audience was about to see into context.
“We are coming to a time when first person stories will no longer be a tool in our toolbox,” Spark, coordinator of the Jewish Federation of the Lehigh Valley’s Holocaust Resource Center, told the 120 people in attendance at the Frank Banko Alehouse Cinemas at SteelStacks.
Spark asked the attendees to be a part of the story just by watching the film. The movie stars Rachel Weisz as Deborah Lipstadt, who took on Holocaust denier David Irving in British court after he sued her for libel.
“Thank you for owning this history,” Spark said.
Lipstadt, a professor of modern Jewish history and Holocaust studies at Emory University who spoke in the Lehigh Valley at Muhlenberg College’s Wallenberg Tribute Lecture last year, had criticized Irving’s falsification of Holocaust history in her 1993 book “Denying the Holocaust.” In 1996, Irving sued her for libel in British court, where the burden of proof lies with the defendant. The movie depicts how Lipstadt won the case, exposing Irving as an intentional falsifier of Holocaust history.
Lipstadt acknowledged to JTA that she had thought about the trial’s cinematic potential. Still, when producers first approached her about “Denial” in 2008, she laughed — the same reaction, she recalled, that she had when she found out Irving was suing her.
“When you sign over a book, you are essentially giving them control over your story,” she told JTA. “You’re not going to be able to say, ‘No, that’s not right, I don’t like that, don’t include this.’ So what I kept querying them about is, this is a movie about truth. Do you understand you have to stick to the truth?”
The finished product, Lipstadt said, hews closely to the truth. The story heightens her tension with her lawyers and combines a string of meetings with Holocaust survivors into one encounter. But the courtroom scenes are taken verbatim from the record, and dramatic scenes — from Irving ambushing Lipstadt at a lecture to a tense Shabbat dinner with British Jewish leaders — happened more or less as they play out on screen.
The movie keeps the drama alive by focusing much of the plot on Lipstadt’s conflict with her lawyers. Throughout much of the film, Lipstadt attempts to coax her reserved British legal team to allow her and Holocaust survivors to take the stand.
“There were moments that I wish had gotten more play in the movie,” she said. “The movie I would have made would have been 3 1/2 hours, maybe four hours.”
At times, filming felt almost too spot-on for Lipstadt. A central scene takes place at Auschwitz, where Lipstadt and one of her lawyers meet to gather evidence. The filming caused Lipstadt to relive some of the experiences, which felt “very strange, and I tried to stay as far out of sight lines as possible.”
But the movie’s central message, she said, is about the need to affirm historical truth, uncomfortable as it may be. And in an age where Lipstadt says anti-Semitism is again rising, she is grateful to have played a role in preserving Holocaust memory.
“I got a chance to be out there on the front lines,” she said. “I got a chance to fight the good fight, and I know so many people — Jews, African-Americans, gays, people who have faced prejudice, but certainly Jews — who would want the chance to fight the good fight. And I feel very lucky.”
The premiere was sponsored by the Holocaust Resource Center and the JCC’s Jewish & Israeli Film Festival. The movie is now open Valley-wide.
Material from the Jewish Telegraphic Agency was used in this report.