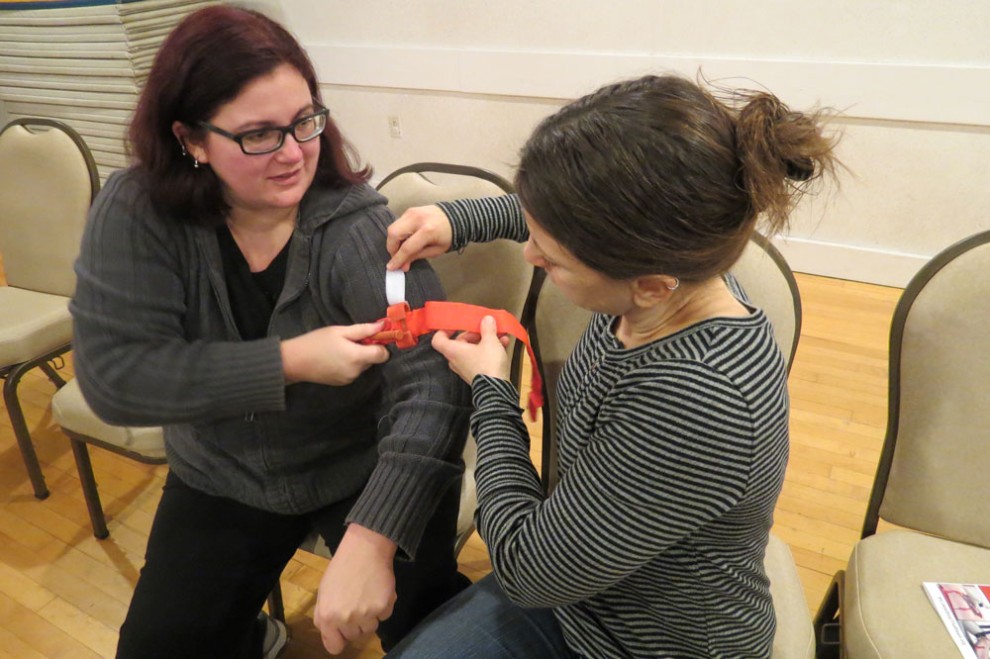 On the evening of Monday, Dec. 10, nearly 50 people gathered in the Auxiliary Auditorium of the Jewish Community Center to learn how to potentially save a life.

Dr. Peter Thomas, St. Luke’s University Health Network’s director of trauma, and a group of volunteers were on hand for a “Stop the Bleed” training, brought to the Jewish community by the Community Relations Council of the Jewish Federation of the Lehigh Valley and its chair Eric Fels.

Uncontrolled bleeding is the number one cause of preventable death from trauma, and this public health initiative seeks to save lives that would otherwise be lost by training the public on how to stop bleeding after an injury. The program was started in the wake of the Sandy Hook massacre, but the training can be utilized not only at the site of mass shootings and bombings, but also in the case of motor vehicle accidents or other injuries.

“Twenty-five to 30 percent of mass casualties from these incidents could be saved,” said Thomas as he introduced the program to the audience. “Everyone can save a life!”

Thomas reinforced the idea that, in an event when trauma first aid is needed, each person should first ensure their own safety, as they would not be able to help another victim if they themselves become injured. Alerting 9-1-1 is always the next step after that. Then, locating the main source of the life-threatening bleeding is the next priority.

Finally, applying compression to the wound while waiting for emergency personnel to arrive is critical. Training participants each got to try applying a tourniquet and simulating packing a wound. The key point was that, while there are a number of methods that can be used, they all have one thing in common—compressing a bleeding blood vessel in order to stop the bleeding.

St. Luke’s Stop the Bleed Initiative aims to provide free trauma and bleeding prevention education to first responders, including police departments, schools and other community organizations. In addition, St. Luke’s offers “Stop the Bleed control kits” designed for use in the event of a bleeding emergency. Equipped with items including tourniquets and special bleeding control dressings, the St. Luke’s Stop the Bleed control kits can serve as an important companion to standard first aid kits and AEDs and contain all of the necessary supplies and resources needed to respond to and treat bleeding emergencies that may result from traumatic injuries.

One kit has been donated to the Lehigh Valley Jewish community and St. Luke’s is offering more kits at half price to non-profits. Contact Aaron Gorodzinsky for more details on ordering one for your group or synagogue.