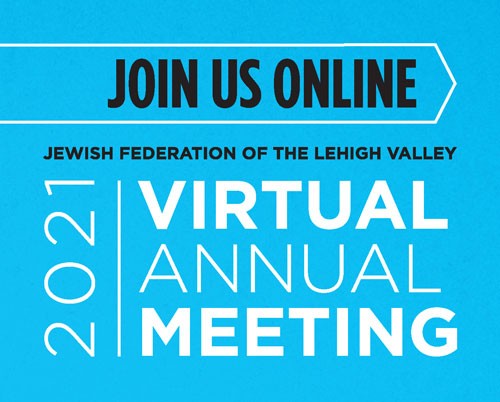 The Jewish Federation will honor four pillars of community leadership at its Annual Meeting on Thursday, June 10.

The meeting will also feature Federation President Gary Fromer and Executive Director Jeri Zimmerman as they update the “state of the community” and a talk by Rabbi Jeffrey Salkin about how COVID has potentially re-defined American Judaism and whether those changes have been good ones. It will begin at 7 p.m. and take place via Zoom.

Two of the leaders being honored have been integral to the success of the Jewish Community Center through an extremely challenging year.

Brian Ford, who is concluding his two-year term this year as president of the JCC, will receive the George Feldman Achievement Award for Young Leadership.

As JCC president, Ford collaborated with the new executive director to lead the JCC through the pandemic, assisted with the sale of camp and helped to streamline board operations. Before becoming president, he also helped to rewrite the JCC’s bylaws and participated in the JCC-JDS taskforce, the executive director search committee, the children’s committee and the camp committee.

Ford is “passionate about everything he undertakes, and always tries to put a positive spin on life,” read a nomination submitted on his behalf.

Perhaps it's no coincidence that with all that the JCC has faced and achieved this year, its executive director, Eric Lightman, will receive this year’s Mark L. Goldstein Award for Outstanding Jewish Professionals.

“His staff looks up to him as a leader and he has a great relationship with his employees,” read one nomination on his behalf. “He has a great vision for the JCC and is always looking to better the J and continues to support the other agencies and strives to better the community.”

Lightman has stood at the helm of the many changes the JCC has undergone this year. In the early days of the pandemic, he took every precaution to still open Camp JCC safely. As the school year unfolded, he led the JCC in the creation of JSchool to meet the needs of families through hybrid learning.

He also oversaw the move of the camp from Center Valley to Allentown, the building of a brand new outdoor pool at the J and the complete overhaul of the indoor pool.

Lightman “has made a significant impact through his professional role, demonstrating dedication and commitment to Jewish values, pursuing collaborative efforts and exhibiting optimism and leadership in the Lehigh Valley Jewish community,” another nomination read.

“Bill has made it his mission to bring in new and returning Maimonides gifts, and he really hit the phones tirelessly this year,” said Aaron Gorodzinsky, director of campaign and security planning for the Federation. “We owe a lot of our success this year to Bill, and he is absolutely deserving of this award.”

And this year’s Mortimer S. Schiff Award for Prejudice Reduction will go to Eva Derby, who embraces the importance of sharing her own Holocaust story to teach tolerance and acceptance. Derby has worked with the Federation’s Holocaust Resource Center to present in schools and, this year, shared her moving story during a virtual Zikaron BiSalon with the Lehigh Valley and Yoav, Israel.

In addition to presenting these awards, the Federation will also honor its outgoing leadership and elect its new board and officers.