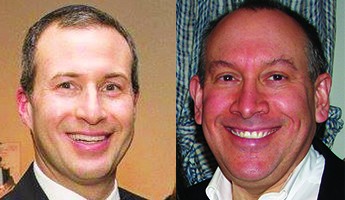 Two Jewish community leaders and the leadership of the state of Pennsylvania will be honored by the Jewish Federation this year at its annual meeting on June 14.

Eric Fels, chairman of the Federation’s Community Relations Council, former president of Congregation Keneseth Israel and nominee for the next president of the Jewish Day School, will receive this year’s George Feldman Achievement Award for Young Leadership. The award recognizes the finest of our community’s emerging volunteer leadership and recent winners have included Robby Wax, Nicole Rosenthal, Iris Epstein and Frank and Tama Tamarkin.

“I can think of no one who better epitomizes a well-rounded young Jewish leader than Dr. Fels,” Rabbi Seth Philips of Congregation Keneseth Israel said in his nomination for Fels. “As president of Congregation Keneseth Israel, he literally saved the congregation from self-destructing and closing. He is intimately involved with Jewish education, both for his own children and now at the Jewish Day School. As a non-parent board member, he brings an unmatched perspective and enthusiasm.”

Bob Wilson, second-time president of the Federation’s Maimonides Society and past campaign chairman, will be this year’s recipient of the Pomerantz Award for Campaign Excellence.

“Bob demonstrates a strong desire to work on our annual campaign and is always ready to reach out to others for their support,” said Jeri Zimmerman, assistant executive director of the Federation. “He was a tremendous asset to our 2016 campaign and is helping to make a difference in the Lehigh Valley, in Israel and around the world.”

The Mortimer S. Schiff Award for Prejudice Reduction this year will go to the Pennsylvania General Assembly for its work on the Holocaust Education Bill, which passed unanimously in the House and Senate in 2014 and is currently being implemented across the state.

The law encourages schools to teach their students about the Holocaust, genocide and human rights violations. It directs the state to develop a curriculum, distribute the curriculum to all school districts, train teachers to teach the subject effectively and assess schools’ use of these resources. If a certain number of schools are not voluntarily participating in the program, the curriculum may become a mandate.

“The Pennsylvania General Assembly has done what only it can do in terms of blanketing the state with the goal that all of the students will be exposed not just to the history of the Holocaust, but to the lessons of morality that emanate from the Holocaust,” said Mark L. Goldstein, executive director of the Jewish Federation. “The goal is not to teach the Holocaust, the goal is to promote prejudice reduction and tolerance, and that’s what the Schiff award stands for.”

The Federation will also elect its new board and a full slate of officers and honorary officers at the annual meeting. Mark H. Scoblionko has been nominated for a third year as president.

Yaron Sideman, consul general to Israel for the mid-Atlantic region, will pay his last official visit to the Lehigh Valley before the Philadelphia consulate’s closure in August.

The Jewish Federation’s annual meeting will be held Tuesday, June 14, at 6:30 p.m. at the JCC of the Lehigh Valley. There will be heavy hors d’oeuvres and an open bar and it is free and open to everyone. Please RSVP to 610-821-5500 or mailbox@jflv.org.