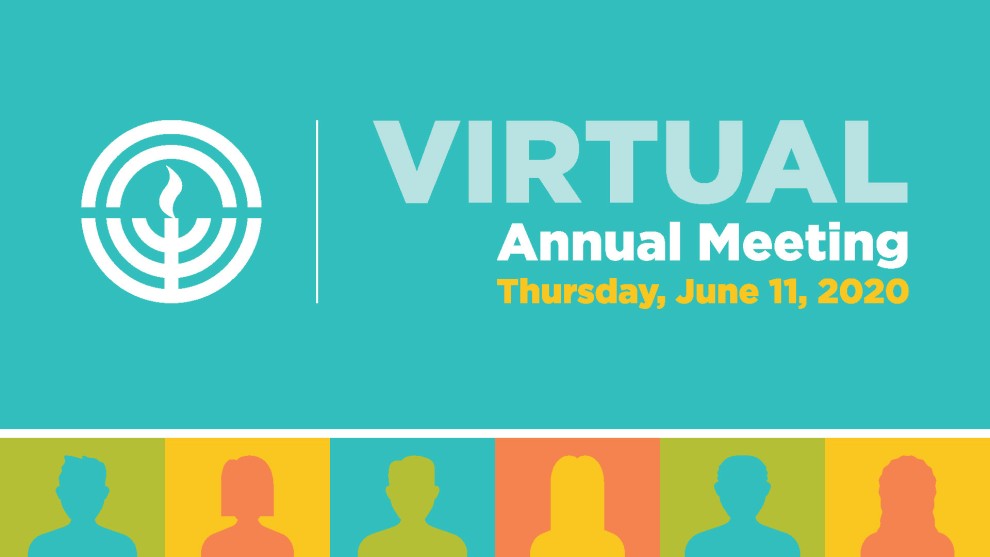 By Stephanie Smartschan
JFLV Director of Community Development & Operations
The Jewish Federation of the Lehigh Valley will discuss the current state of the community and honor its award winners at its virtual Annual Meeting on June 11.
Eric Fingerhut, CEO of the Jewish Federations of North America, will be the featured speaker, discussing the global Jewish community and moving forward through this time of uncertainty. Gary Fromer, president of the Lehigh Valley Federation, will discuss the same topic on a local level.
The Federation will be giving out four awards this year: the George Feldman Achievement Award for Young Leadership, the Daniel Pomerantz Award for Campaign Excellence, the Mortimer S. Schiff Award for Prejudice Reduction and the Mark L. Goldstein Award for Outstanding Jewish Communal Professionals.
“We are privileged to give these awards to honor the leadership and excellence of those for whom the awards are named,” said Jeri Zimmerman, executive director of the Jewish Federation. “The recipients reflect Jewish values through their leadership, engagement and commitment to our Jewish community.”
Israel Zighelboim, a member of the Federation’s executive board and co-chair of the Community Planning Committee, will be this year’s recipient of the Feldman Award.
“Since arriving in the Lehigh Valley, Israel has been an exemplary member of our Jewish community. He learned the importance of a vibrant Jewish community from being born and raised in Caracas, Venezuela,” read a nomination for Zighelboim.
“As a co-chair of the Community Planning Committee, Israel brings fresh ideas and a forward-thinking attitude, always looking for ways to make our community the best that it can be,” Zimmerman said.
Zighelboim, chair of the St. Luke’s Department of Obstetrics and Gynecology, has also served on the JCC executive board and as part of the Chevra Kiddisha and is active at Congregation Sons of Israel and Temple Beth El. His wife, Valeska, took home the award two years ago.
For her tireless campaign efforts, Eileen Ufberg will receive the Pomerantz Award – for the second time.
“Campaign solicitation comes so naturally to her because she knows that the funds raised are making a huge impact in the lives of so many others. And she always does it with a smile!” Zimmerman said. “Even though she has received this award in the past, we truly could not think of someone more deserving.”
In addition to her work for the Annual Campaign, Eileen and her husband Mickey stepped up as co-chairs of the Coronavirus Emergency Fund this year.
The Schiff Award for Prejudice Reduction will go to Rabbi Michael Singer of Congregation Brith Sholom for his dedicated interfaith efforts in Bethlehem. Singer single-handedly started the Bethlehem Interfaith Group (BIG) by going door to door and recruiting support. The group now meets regularly for events like Passover seders and days of prayer.
“The work Rabbi Singer is doing is surely helping to teach tolerance and reduce prejudice,” said Richie Schiff, son of Mortimer, z”l, for whom the award is named.  “That’s really what this award is all about.”
And a second community rabbi will be honored this year as Rabbi Seth Phillips of Congregation Keneseth Israel receives the Mark L. Goldstein professional award for his Jewish communal service. Upon hearing that he was the recipient, Rabbi Phillips said “thank you for this singular honor” and KI President Melissa Hakim was overjoyed.
“Through his role as rabbi of Congregation Keneseth Israel, Rabbi Seth has made a significant impact on his congregation, as well as the entire Lehigh Valley Jewish community,” read a nomination for Phillips. He “consistently demonstrates dedication and commitment to Jewish values, and he conveys those values so strongly and with a good heart throughout his congregation.”
The nomination also noted his activism and frequent collaboration with other Jewish agencies and synagogues.
Annual meeting attendees will also have the chance to elect the new Federation Board of Directors and the board will elect its new officers.
The Jewish Federation’s Annual Meeting will take place on Thursday, June 11, at 7 p.m. via Zoom. Sign-up online or email mailbox@jflv.org to register now.