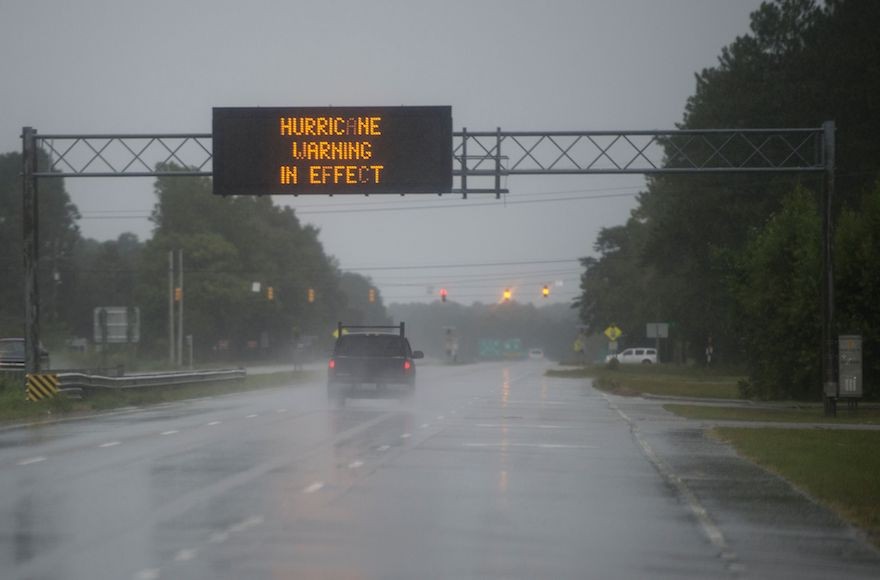 When Rabbi Emily Losben-Ostrov took her North Carolina congregation, Temple of Israel of Wilmington, on a Rosh Hashanah boat ride on the Cape Fear River – before the storm – she hadn’t intended for the body of water’s name to be taken literally.

The Reform synagogue was performing the ritual of tashlich, in which Jews throw pieces of bread into the water to symbolize the casting away of sins. But by the end of the boat ride on Sept. 10, the passengers were talking about what to do if the water threatened to swallow them up.

Conversations turned from the Jewish New Year to Hurricane Florence, which was looming off the Carolina coast. Would they evacuate or hunker down?

“People started talking about, ‘What are we going to do with the Torahs?’” Losben-Ostrov told JTA. “That fear was starting to set in. It was definitely ironic to be on the water at that time and to look around and feel the calm before the storm … and have a fear in our hearts that this incredible, wonderful community, we don’t know what’s going to be.”

On Sept. 13, Hurricane Florence began hitting the Carolinas as a Category 2 hurricane. As of press time, the after effects of the storm were still being felt and an assessment of damages was ongoing. Temple of Israel was reportedly among those to sustain significant damage and was forced to cancel Yom Kippur services.

“Due to the damage to our building, the lack of power downtown and the overall concern for everyone’s safety, it has been decided that we must cancel services for both Kol Nidre and Yom Kippur,” the temple wrote on their Facebook page on Sept. 17. On Sept. 21, in an effort to get “back to normal,” the congregation held Shabbat services at the nearby Reibman Center.

On Sept. 18, the Jewish Federation of the Lehigh Valley opened an emergency Hurricane Relief campaign and urged community members to contribute.

“Because of the slow pace of Hurricane Florence, we are still collecting information about the various Jewish communities that have been affected. Many areas are still evacuated and the threat of flooding continues, and so it will take some days before we have a comprehensive picture,” the notice from the Federation said.

“We know that Temple of Israel and Bnai Israel Congregation in Wilmington, and Temple B’nai Sholem in New Bern, all in North Carolina, have sustained significant damage. We are starting to hear about individual families and individuals whose homes have flooded,” it continued. “While the larger Jewish communities have so far escaped widespread damage, it is important that we ensure we can step in to help the smaller communities that have been heavily impacted.”

Rabbis haven’t failed to see the connection between the natural disaster and the High Holidays, where the spiritual stakes are high and water is a prominent metaphorical device. Among the best-known lines of the holiday’s liturgy, from the “Unetanah Tokef” prayer, is “Who by water, and who by fire?”

Rabbi David Weissman of Myrtle Beach’s Reform Temple Shalom said a special prayer in advance of the hurricane on Sept. 10, and planned to make it the focus of his Yom Kippur sermon. Rabbi Shlomo Elharar of the same town’s Orthodox Beth El Sephardic Jewish Center spoke in theological terms about the storm.

“We’re in exile,” Elharar said, referring to his evacuating congregation. “Most of the congregation has left the city. We’re waiting for the kindness of God. It’s an atmosphere of war. It reminds me of the Yom Kippur War.”

On the ground, Jewish residents prepared much like their neighbors. Those who had been mandated to leave headed to drier spots in Georgia, Florida or elsewhere. Phone trees, supplies and points of contact were set up for elderly or infirm residents who stayed. Those who were confident that their homes could withstand the storm shuttered their windows and hoped for the best.

Jewish communities followed the example of cities like Houston, whose Jewish neighborhoods were ravaged by Hurricane Harvey last year: They locked up their synagogues or moved their Torahs to dry ground. They linked up with other Jewish communities, in Atlanta or Miami, that offered to host evacuees. They made sure vulnerable residents were cared for. They coordinated with national Jewish organizations, like the Jewish Federations or the aid groups IsraAid and Nechama, in advance of the storm’s aftermath.

“In these times, you realize you’re part of this community that’s so much bigger than your one local community,” said Judi Corsaro, CEO of the Charleston Jewish Federation in South Carolina.

In Wilmington, Chabad Rabbi Moshe Yitzchak Lieblich planned to ride out the storm. He compiled a list of the community members who were in town and canceled services for that Shabbat.

After days with no contact due to the aftermath of the hurricane, his congregants were able to eat a kosher meal before the start of Yom Kippur thanks to the assistance of the Chabad in Charlotte.

Rabbi Yossi Groner of Ohr HaTorah in Charlotte was able to speak by telephone to Leiblich in Wilmington on Monday, Sept. 17. Leiblich requested that he find a way to send kosher food, the Charlotte Observer reported.

Groner’s son, Ben Tzion, contacted a friend who is a helicopter mechanic and was able to secure a helicopter. It arrived at the airport in Wilmington on Sept. 18 at 1:30 p.m. carrying 150 pounds of kosher chicken and dairy products as well as ready-to-eat meals, which were delivered to families preparing for Yom Kippur, the newspaper reported.

“It was tremendous, and certainly a relief,” Leiblich told the Observer.

The Chabad of Wilmington was expected to be the only one in the city holding Yom Kippur services because of the hurricane.

To make a donation to the Jewish Federation’s Hurricane Relief Fund, visit jewishlehighvalley.org/hurricanerelief.