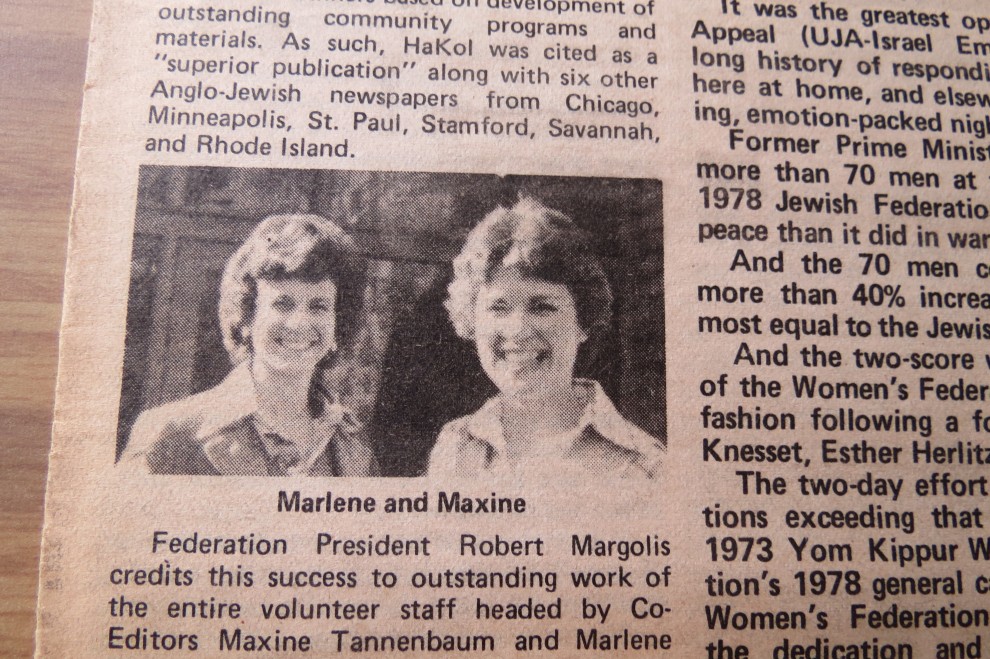 “It’s new; it’s news …  and invites your views” greeted readers of the first issue of HAKOL in September/October 1976.

Initially published by the Jewish Federation of Allentown before the merger of the three Lehigh Valley Federations, HAKOL served as a newsletter for Allentown that quickly expanded to include news from both Easton and Bethlehem. Driving this project were two incredibly bright women whose contributions to the paper live on today: Marlene Finkelstein and Maxine Tannenbaum Klein.

Marlene invited me to her home for an interview with both founders, and together we began to delve into HAKOL’s rich history. In fact, HAKOL didn’t even begin as a newspaper – in 1976, Finkelstein and Klein started the project as part of a “Speakers’ Bureau,” and in this program, the two women formed a group of volunteers who would attend board meetings of Jewish organizations in town and deliver three-to-five minute speeches about Jewish topics of interest. But this wasn’t enough for the ambitious duo.

It was Leslie Gottlieb, the executive director of the Jewish Federation of Allentown, who offered the opportunity to Klein and Finkelstein. “You’re putting in all this time, you’ve got people who can write and so on,” Finkelstein recalled him saying. “How would you like to start a newspaper that would be Federation-sponsored?”

They soon accepted his offer, and along with Max “Maggie” Levine, who brought valuable marketing experience from his role as the advertising director at Hess’s, a large department store in Allentown, and handled some of the more practical aspects of production such as getting the paper printed, the three began to form the paper.

Each issue required a “very labor-intensive process” beginning with Finkelstein and Klein each reading around 30 periodicals a month to get an idea of good news to include in HAKOL. At their editorial meeting once a month, Finkelstein and Klein would present these ideas and brainstorm, along with several volunteers, who would write the stories. After they received the stories, the two would edit them and then send them to the printer. Unlike with modern digital printing, the printer would create the mockups of the articles and Finkelstein and Klein would do a “literal cut and paste” and lay out each article to create the pages. Pictures would be added at this stage, and then the completed pages would be returned to the printer. After reviewing a proof, the paper was then ready to get printed and sent to homes across the Lehigh Valley.

Once the paper was off and running, it was time to develop a vision for the paper’s future. Klein, who grew up in Allentown, and New York-born Finkelstein, both shared an idea of a community transcending one’s immediate geographical area. Finkelstein and Klein dreamed of a newspaper that would encompass not only happenings in the world, but would serve as “a vehicle for people to know what’s going on in the community, thereby uniting the community.” Their greater vision involved bringing in Bethlehem and Easton, which began with giving each city its own page, and culminated in September 1992 when the three cities’ Federations combined to form the Jewish Federation of the Lehigh Valley.

Although Klein and Finkelstein, both volunteers, took the leading role in creating HAKOL and setting goals for the future, their involvement on the editorial board was short-lived. Klein left after three years and Finkelstein after four, and both went back to school, earned further degrees, and embarked on other careers before starting families.

Even though they transferred their “initiative, energy, and imagination” to other projects, including founding Am Haskalah and staying involved with the Reconstructionist movement, both Klein and Finkelstein are avid readers of HAKOL, and are quite proud of how their idea has developed over the years. “It’s more than we envisioned,” Klein said proudly. “It’s become, in its scope, a community-focused paper.”

Finkelstein agreed, noting that “it was always our intention” to feature personal stories from Lehigh Valley residents. “It’s become, in recent years, much more personalized,” which she cited as a strength.

Finkelstein and Klein look forward to HAKOL’s future, just as they did when the paper reached its 100th issue. “This newspaper is a beginning, for its potential is limitless,” the pair wrote in 1988 in an article for HAKOL’s 100th issue, and echo this statement now.

After “giving birth” to the publication, they, like any proud parents, beam with pride at HAKOL’s accomplishments and eagerly wait for the paper to continue to grow and flourish.