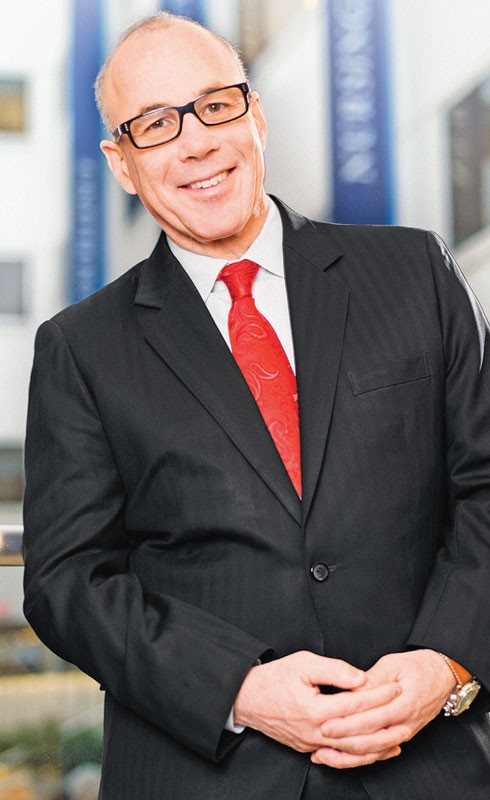 Though he is currently living in Philadelphia, by way most recently of Tampa, and serving as the president and CEO of Thomas Jefferson University and Jefferson Health, Dr. Steve Klasko’s ties to the Lehigh Valley run deep.

His older brother attended Lehigh University and invited him to a fraternity party there. “I knew nothing about colleges or universities, but I really liked that fraternity party,” he said. He applied early decision to Lehigh and graduated in 1974.

After attending medical school at Hahnemann University in Philly, he married a “nice Jewish girl” from York and decided to apply to the residency program at what was then Allentown Hospital. After his residency, he started a private OBGYN practice in Allentown, delivering over 2,000 babies in the Lehigh Valley area from 1982 to 1991.

Just as Klasko’s practice was really taking off, a group of local Jewish doctors were coming together to form a society that would come to be modeled across the country.

“I made the mistake of complaining about something about the Jewish Federation,” said Klasko during a recent interview. “I opened my big mouth … [and] they did the worst thing they could possibly do to somebody whining and said let’s get you involved.”

Klasko was asked to become president of the Maimonides Society of the Jewish Federation of the Lehigh Valley.

He will speak at the society’s 30th anniversary celebration on June 9.

“Steve was always full of energy, enthusiasm, vision and good ideas, characteristics that proved most helpful in leading our Maimonides Society,” said Dr. Larry Levitt, one of the society’s founders.

Around 1992, Klasko became the program director of the OBGYN Department at Lehigh Valley Hospital. He had also started to build up his academic resume.

In the 1980s, he said, 97 percent of OBGYNs were male and the number one procedure performed was a hysterectomy.

“I happened to be at a Penn Sate lecture where a very, very old professor of OBGYN … was talking about hysterectomy,” Klasko said. “He was saying removing the uterus is no big deal, it’s like taking out an appendix.”

Soon after, he came across several books in Barnes & Noble about how hysterectomies had impacted women’s lives. It was like “the first time you realize your parents may have lied to you,” he said. He did some of his early work about how to avoid hysterectomies.

In 1994, he “got tired of listening to all these neurosurgeons whining about the business of medicine” and started in the MBA program at the Wharton School of Business at the University of Pennsylvania.

While attending Wharton, he also became the interim chair of the OBGYN Department at Lehigh Valley and later the chair. After he graduated from Wharton in 1996, he helped form the Lehigh Valley Physician Group and served as its first chair.

In 2004, he joined the University of South Florida as dean of the College of Medicine and vice president of the USF Health Sciences Center.

When he was brought back to Philadelphia in 2013 for his current position at Jefferson University, he had to give up his seat on the LVHN board, but now he serves on the board of Lehigh University. “I can’t get away from the Lehigh Valley,” he said.

At the Maimonides Society gala, Klasko will focus his talks on his just-released new book, “We CAN Fix Healthcare: The Future is NOW.”

Like his previous book, which used the premise of an alien abduction to talk about what is wrong with healthcare, this book also has a science fiction spin.

The concept behind it is President Obama gives it one last shot and brings everyone involved in healthcare together and says let’s figure it out, Klasko said. The stakeholders do what they do best and start blaming everyone else for what is wrong. Then there’s a “science fiction event with blackout and vapor and all we can do is look in the mirror,” he said.

The free community program with Dr. Klasko to celebrate the Maimonides Society’s 30th anniversary will begin at 7:30 p.m. at the JCC. To RSVP, call 610-821-5500, email mailbox@jflv.org or CLICK HERE.