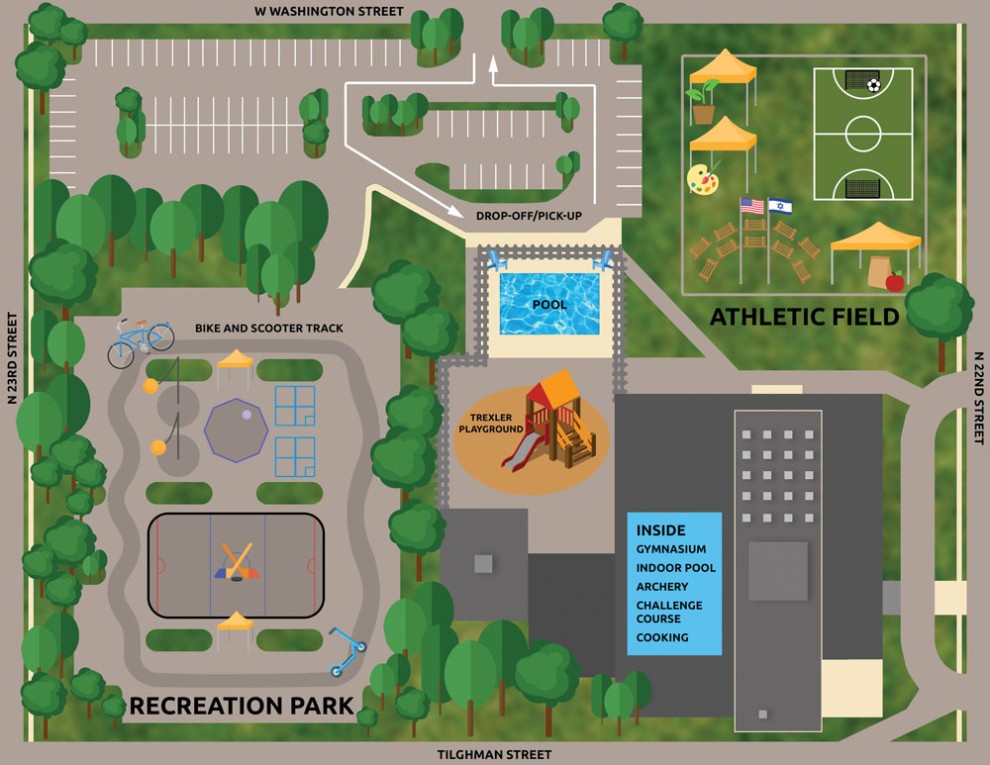 Camp JCC is making a major move this summer—to the Jewish Community Center of the Lehigh Valley. But not before the site undergoes some major new facility upgrades. While many specialty camps will still be going on inside the JCC building, the format of the traditional Camp JCC program will be primarily outdoors, in direct response to parents’ feedback.

And that outdoors will be greatly enhanced over the next few months with plans underway to build an outdoor pool specifically designed for Camp JCC and to transform the 23rd Street parking lot into a recreation area with a hockey rink, gaga pit and four-square and tetherball courts and a bike and scooter track ringing its perimeter. The Trexler playground which was installed at the former Center Valley camp just a few years ago will also be transported to the Allentown location.

Along with the move to a new location come new, lower tuition rates for Camp JCC. Parents can expect registration to cost about a third less than last year.

“We want camp to be fun, flexible and affordable,” said JCC Executive Director Eric Lightman. “By being here at this facility, it allows us to offer the program at a substantially reduced fee, making it more accessible to families while having even more staff support.”

In addition to the exciting new opportunities for things like field trips once or twice a week (depending on camper age) to places like Hershey Park, swimming even when it’s raining and more interaction between the JCC’s specialty camps and its traditional day camp, there are many camp traditions which will be carried over from years past. Four teen counselors from the Lehigh Valley’s Partnership2Gether community in Yoav will arrive once again this year to bring a bit of Israel to Allentown. And campers will also still have the opportunity to get in the pool twice a day, with instructional swimming in the mornings and free swim in the afternoon. Most importantly, the camp spirit remains the same.

“Our core values and general program structure are not going to change,” said Lightman. “We are still about friendship and community character building.”

While this will be a year of transition, JCC’s newly hired Youth and Camp Director Kristen Johnson emphasized that new opportunities exist thanks to the move.

“I think all of us had an attachment to the property [in Center Valley], but this is an exciting new year, and the kids will have a chance to be part of the first year of camp here. It’s a lot of change, but it’s still the same terrific programming, and we’ll have amazing staff. Anyone who wants to meet with me, I’m super excited to talk with them,” she said.