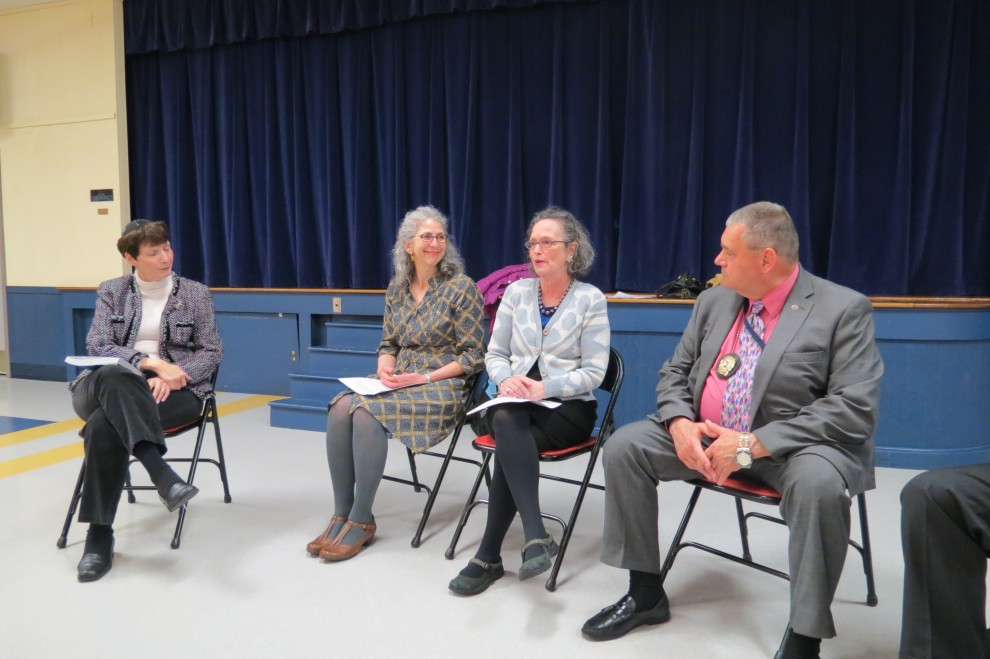 The Jewish Day School of the Lehigh Valley hosted a briefing on how to feel and stay safe during challenging times on March 29, featuring speakers from Jewish Family Service of the Lehigh Valley and local police and FBI officials.
After an opening prayer from Rabbi Melody Davis of Temple Covenant of Peace, Susan Sklaroff-Van Hook, MA, CCTP, clinical coordinator and resource specialist at JFS, introduced the topic of helping children and families feel safe in the wake of the bomb threats that recently plagued Jewish community centers and day schools.

Although an arrest was made on March 23, said FBI supervisory senior resident agent Thomas Marakovits, there may still be copycat threats in the future, and society as a whole will need to figure out how to deal with threats like these that are encrypted over the Internet. With these threats, it is harder to find the source of the threats even with a warrant from a judge, he added, and recent developments in technology are enabling “safe spaces” for criminals online that are not easy to crack, even by law enforcement.

As a result of this current climate, south Whitehall police chief John Christman said that his department and the Allentown police will work together to keep JDS students safe. Steps will include signage outside the school to restrict parking and U-turns to keep kids safe when they’re outside, officer patrols at random times each day as well as training for students and faculty in lockdown and evacuation protocol.

Earlier on the day of the program, JDS did a drill of a hard lockdown, with police and bomb sniffing dogs patrolling the halls, and students and teachers operating according to the run-hide-fight protocol. This means the first priority for students in an intruder situation is to run to a safe place and then hide; fighting the intruder is a last resort. During the drill, students and teachers barricaded the doors and hid in closets while the police pretended to be intruders, making sure that the students and teachers knew to not open the door until JDS Head of School Amy Golding announced her presence.

The briefing offered a chance for the attending parents and grandparents to explain how their children felt after the lockdown drill. When one mother said that her son thought it was real, Golding explained the language used to tell students and their families about the nature of lockdown drills at the school.

Christman reassured attendees that his officers were “impressed” with JDS students and staff during the lockdown drill and affirmed that “we’re here to help you and want to work with you.”

In the wake of the drill, Golding thanked Christman and school security officer Bob Lembach for “giving us such a safe and secure environment.” She also added that the students who attended the Stand Against Hate rally in Philadelphia on March 2 were optimistic about the future, at least in part because of the “strong culture” created at JDS.

Lembach reaffirmed his personal commitment to the school: “I became part of the community” at the beginning of his tenure as school security officer, he said, concluding that “[the students] are my adopted family and no one will ever mess with my family.” Before taking this job, Lembach was a police officer for 26 years and then spent time teaching high school students, college students and over 1,000 Allentown police officers about criminal justice and safety.

After each speaker had a short time to address the lockdown drill, JFS Executive Director Debbie Zoller brought up the issue of anxiety as a result of the recent threats, using a poignant example of the time her daughter was working in the Overland Park JCC when it was the site of a shooting in 2014. “We’re responsible for keeping our kids safe and having a dialogue” to help them feel safe,” Zoller concluded, adding that “how safe you feel impacts how safe other people feel,” including children. She then explained a variety of signs of anxiety in children, including feeling worried all the time/generalized anxiety, trouble sleeping, restlessness, trouble concentrating and new or renewed separation anxiety.

“Feeling safe starts in the home,” Sklaroff-Van Hook added, noting that it’s important for children to have “predictability and structure for emotional regulation.” Some ways that adults can help with this is practicing situations like the lockdown drill, since high anxiety floods the rational part of the brain, and modeling confidence for children, as Golding has begun empowering the older students to help the younger students in a crisis situation.

Zoller hopes this program will be a model for future parent education programs in a partnership between JFS and JDS. As for the law enforcement officials present, they all urged parents and grandparents to not take chances and “if you see something, say something,” and that the police will respond quickly.