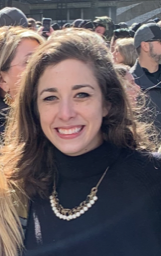 By Randi Senderowitz
Special to HAKOL

It was August 2014, way back when college was college and students actually learned in a live classroom setting. Marlee Senderowitz was adapting to college life as a freshman engineering student at Georgia Institute of Technology. Coming from Allentown, Pennsylvania, Senderowitz was a long way from home but very much looking forward to making a new life and friends in Atlanta, Georgia. She quickly immersed herself in as much as she could, including joining a sorority and social clubs on campus. Senderowitz even worked part time at an Atlanta retail store in Phipps Plaza. To her, the work was fun and served as a getaway from her daily hi-tech studies.

As if all that, along with a full academic load, weren’t enough to keep her busy, she also answered a mass email from University Tees, a company specializing in custom college apparel. They were seeking a “campus representative” to sell their apparel on the Georgia Tech campus. Senderowitz was hired and quickly became one of UTees’ top sales people by exceeding sales goals on a regular basis.

Fast forward six years later when Senderowitz graduated with honors with a Bachelor of Science degree in Materials Science Engineering from Georgia Tech. Before graduation, she was recruited as a professional engineer, but still maintained her part-time job with UTees.

“It was just too much fun to give up,” said Senderowitz, smiling.

When COVID-19 hit, Senderowitz felt compelled to help those in need in some way. The first thought was to donate her UTees sales commissions to charity. Then a light bulb went off in her head and she thought of “creating a  product” to sell rather than waiting for customers to buy. She began by initiating a T-shirt and sweatshirt sales campaign aimed at communities by collecting logos of local area landmarks and hotspots. UTees’ art department then worked their magic to create wearable town-specific commemorative apparel. Thinking she would raise a few hundred dollars for charity made her happy. Imagine Senderowitz’s astonishment when she saw her first day’s gross sales top $1,000. This trend continued for weeks. Realizing this was a terrific idea, she extended this campaign to other areas outside of Atlanta, including Bethlehem, PA; Erie, PA; Lawrenceville, NJ; Hamilton, NY; Savannah, GA; and Georgetown, DC.

To date, Senderowitz has donated in excess of $12,000 among the following worthwhile organizations: The Giving Kitchen, Hamilton Food Cupboard, Mostly Mutts, ATL Family Meal, Capital Area Food Bank, Second Harvest Food Bank of Northwest PA, Princeton Area Community Foundation, COVID-19 Relief and Recovery Fund, St. Luke’s COVID-19 Relief and Recovery Fund and the  Equal Justice Initiative. Senderowitz plans to continue her generosity and has other ideas in the pipeline. A current goal is to attain a sponsor who will match her donations.

“I look forward to the day that COVID-19 is in our rear view mirror, but until then, I will continue to help,” said Senderowitz.