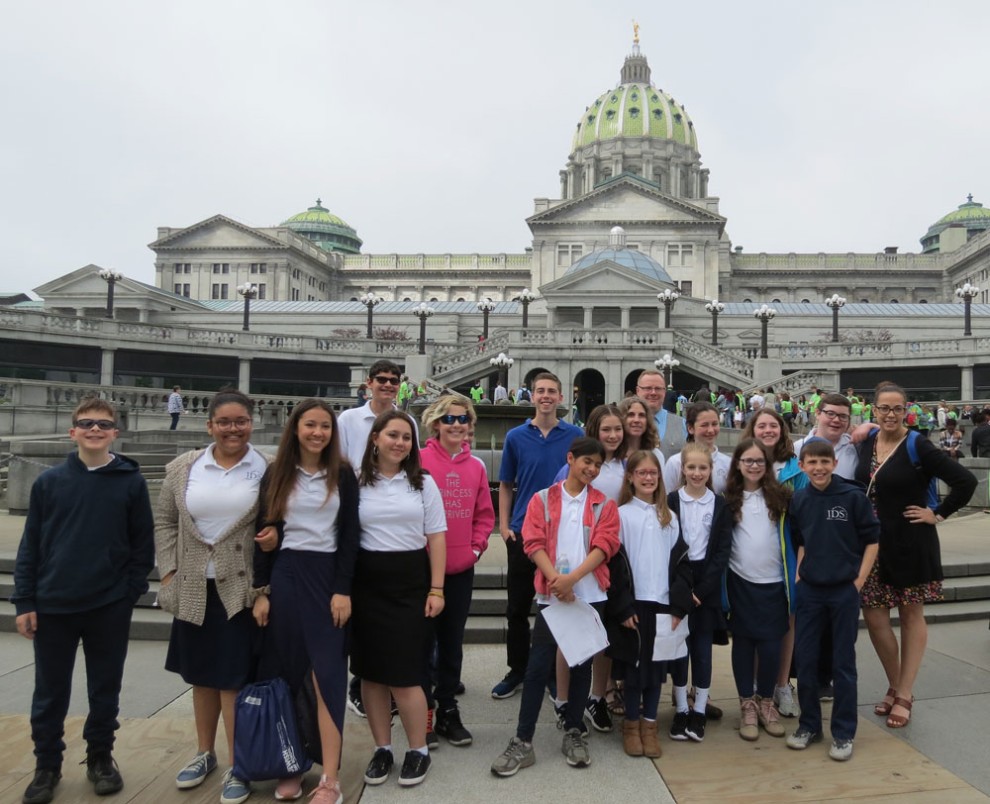 On May 7, Rabbi Seth Phillips sent off a bus full of Jewish Day School of the Lehigh Valley fifth- through eighth-graders, along with educators and community members, with a blessing and a charge to remember that they represented both “Jewish and American values.”

The group was embarking on a full day at the Pennsylvania State Capitol in Harrisburg for the second year in a row. This year, they were lobbying their legislators not only for increases for the Educational Improvement Tax Credit (EITC) program, which provides scholarships that enable many of them to be able to attend JDS, but also for more efforts for school security in the wake of tragic acts of violence rooted in anti-Semitism over the past year. They joined with 250 other Jewish students from 13 Jewish schools across Pennsylvania, alongside many other schools.

Their day included meeting with representatives from both sides of the aisle and both sides of the building – both the Pennsylvania state House and Senate – such as Rep. Mike Schlossberg (D) and Rep. David Hickernell (R), where they got a chance to personally thank them and speak about what was most concerning to them. They also joined in enthusiastic rallies on both the outside and inside steps of the Capitol building, one for EITC and one for school security. The latter was organized by Teach PA, where they spoke about the new School Safety Bill and also announced the passing of the EITC House bill that morning.

The spirit of the day was perfectly encapsulated by Sen. Andy Dinniman (D), introduced by JDS alum Yitzi Powers, who reminded the crowd that Pennsylvania was founded on a declaration of religious tolerance, and that “we’re blessed by a God to work to make this the best place we can and to make sure that the tradition of William Penn is alive and well in Pennsylvania.”

To learn more about the EITC program, if you qualify and how to apply ON July 1, 2019, call the Jewish Federation at 610-821-5500 or visit www.jewishlehighvalley.org/eitc.