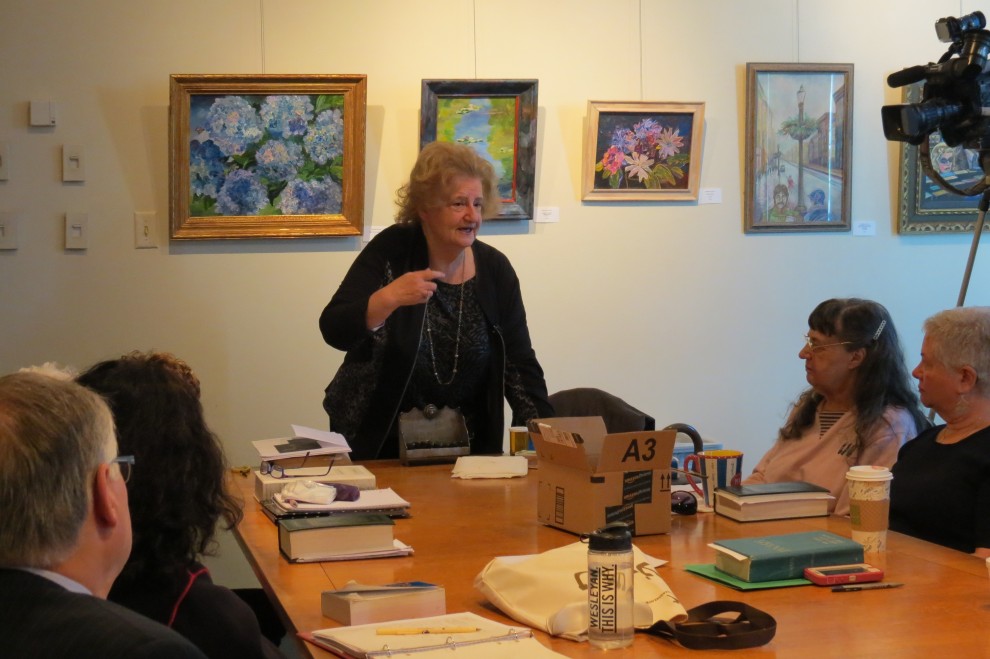 By Carl Zebrowski
Editor of Hakol
Yachad University is 25 years old. Jeanette Eichenwald cofounded the Lehigh Valley Jewish education institution, taught classes all along, and now has retired.
The lifelong educator whose wide-ranging resume includes president and executive director of the Jewish Federation of the Lehigh Valley, principal of the Keneseth Israel Religious School, and Allentown councilwoman sat down with Hakol to recount Yachad’s beginnings.
Eichenwald recalled a conversation from the 1990s with Barbara Sussman, past president of the Women’s Division of the Federation and of the Jewish Day School and a prominent Torah reader in the community. They discussed how formal instruction on Jewish topics ended when students were too young. Eichenwald said Sussman told her, “Let’s create a Jewish education program for adults.”
They did, purchasing an existing course of study to guide them. With that simple act, a long-time program exploring the history, tradition, and philosophy of the Jewish people took root.
Soon Eichenwald and Sussman discovered that several congregations in the Lehigh Valley had purchased the same course. It struck them that instead of these programs pursuing the same educational goals separately, they could join together, pooling resources and saving money.
The two women flew to Chicago to visit Florence Melton, who had founded the Florence Melton Adult Mini-School on the unconventional premise that a significant number of Jewish adults would commit to an extended program of Jewish learning. Eichenwald and Sussman set up what essentially was a franchise to purchase existing courses from the Melton school for educating Jewish adults throughout the Lehigh Valley.
The Melton plan of study lasted two years, with two courses at a time twice a year. Eichenwald and Sussman each taught one course. Local clergy taught the other two.
Twenty-five women enrolled in the first class, a significant number, considering the cost. “We had to charge quite a bit of money because we had to pay the franchise fee,” Eichenwald said. “Without the franchise fee, we could charge half the price.”
Eichenwald and Sussman asked the Melton school to lower the price. “They said no,” Eichenwald recalled. “So we said goodbye.” So then what? “Barbara and I said, ‘Well, we’ll make our own.’”
It was 1997 and their newly created education was officially dubbed Yachad University -- Yachad meaning “together.”
Yachad classes continued for 23 years. During that time, teachers taught on various Jewish subjects, representing diverse viewpoints within the community. “Over the years we’ve had clergy of all denominations,” Eichenwald said.
Then COVID arrived in 2020. “We shut down,” she said, “as did everyone else.”
To the rescue came the pandemic phenomenon now known simply as Zoom, and Yachad courses resumed, virtually. “The number zoomed on Zoom,” Eichenwald said. Ninety people enrolled the first year, and 70 in the second. Snowbirds wintering in Florida and community members who had moved away from the valley suddenly could participate again, and they filled out the class rolls.
Many students have been loyal to Yachad since the start. “There was a staunch cohort that still remained over 25 years,” Eichenwald said. Other students got involved when their lives changed to give them more free time. “What I found,” she said, “is that when people retired, they joined.”
A quarter century of Yachad has brought many rewards, Eichenwald said, as Rabbi Seth Phillips, just retired from Congregation Keneseth Israel, prepares to take over teaching her classes this fall. “I think it enhanced the Jewish community enormously. When you educate the parents, you educate the next generation, so it has far-reaching consequences for the good.”
“I’ve done a lot of things in the Jewish community,” Eichenwald concluded, “but this one makes me the proudest.”