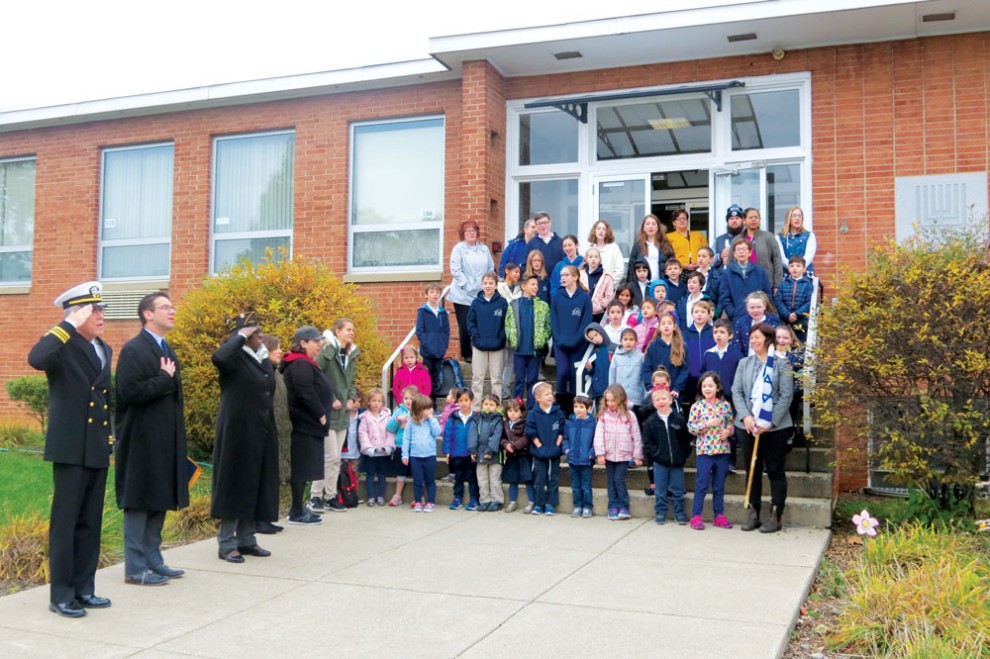 On the morning of Friday, Nov. 9, the students of the Jewish Day School gathered outside for a very special flag raising ceremony. They were accompanied by honored veterans of both the American and Israeli armed forces. JDS Head of School Amy Golding led the group in singing both the Israeli and American national anthems, as first JDS Hebrew and Judaics teacher Merav Wirthiem, herself a veteran of the IDF, unrolled the Israeli flag, and then the American flag was raised by JDS parent and Captain in the U.S. Army Inactive Reserves Kristen Johnson and JDS librarian and retired U.S. Navy Commander Sean Boyle.

Turning inside, the student council announced that Sunday, Nov. 11, is Veterans Day, kicking off an assembly full of exciting anecdotes and meaningful reminders from the veterans visiting the student body. Retired Senior Master Sergeant Sheila Berg, commander of Post 239 of the Jewish War Veterans and former JDS parent, introduced the history of Veterans Day, remarking on how this year is the 100th anniversary of its start with the armistice of World War I. State Rep. Mike Schlossberg was also there in a dual role of both government official and JDS parent. He presented a proclamation to the morning’s main speaker, Boyle, saying, “I have always said being Jewish to me means many things. It’s how I relate to God and pray, but it’s also the social compact of service and making the world a better place.” Schlossberg told students that that could be done in many ways, such as being a teacher, a public servant, or serving for decades in the military like Boyle.

Boyle joined the JDS as librarian last year after serving for 27 years in the U.S. Navy. An Allentown native, he knew he wanted to serve in the military from the age of five, when his favorite book was about George Washington’s war heroics. He reminded students of the Lehigh Valley’s long history of connection to military service from the Revolutionary War onward and shared his own family’s history, with a long line of forefathers serving before him, including a grandfather responsible for installing the telephone in the peace treaty room in World War II.

Boyle then regaled them with tales of his own time circling the globe on seven different ships, ranging from crews of 280 to over 5,000. Sacrifice was a key theme from all of the speakers, and Boyle is no stranger to the concept. After 9/11, his and his wife’s dream wedding was postponed when he was ordered to elope due to the wartime circumstances. It seems that Boyle has no regrets, however, as he told the students, “The main aspect to remember is that all veterans have willingly stood up to defend our country, sacrificing time with their families and many other things. It is a rewarding privilege to serve, but it has a cost.”

Concluding the program was Rabbi Seth Phillips, a retired Lieutenant Commander and chaplain of the U.S. Navy, who eloquently answered the question put forward to the veterans by one student who asked why people choose to fight each other. “The people in uniform are the most peace-loving of all, because we know the cost,” he told her. “We don’t long for a fight. We wish we could all live in shalom, but sometimes we must take action when talking doesn’t work.”

Phillips concluded the assembly with a prayer asking that all the children gathered would be “blessed with gratitude for the sacrifice needed for each of the things [they] hold dear” and that “we may always be pursuers of peace.”