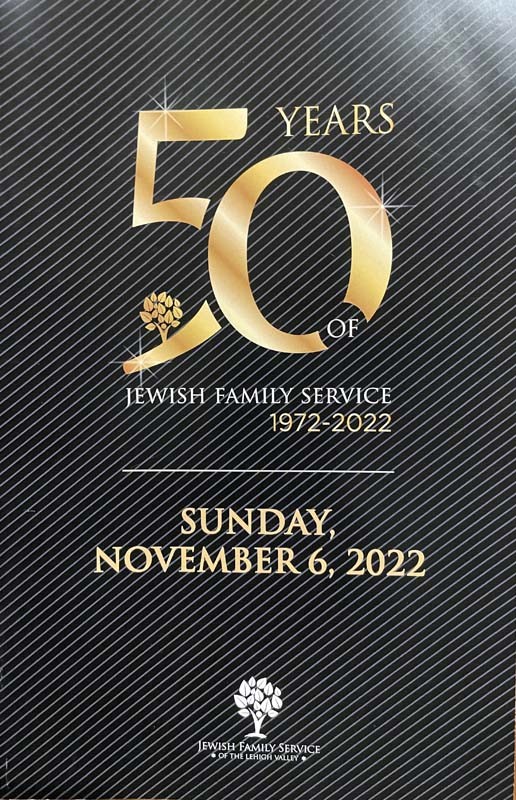 The Jewish Family Service of the Lehigh Valley celebrated its 50th anniversary with a live-streamed commemorative event on Sunday, November 6.

There were timelines with milestones from the organization’s history, commentary from current JFS leaders and volunteers, and memories from those who have worked with the agency in the past.

JFS has come a long way over those decades. Immediate past president Rabbi Allen Juda talked about how the agency staff used to be one full-time person. Now there are 50 full- and part-time workers. On top of that are 90 to 100 volunteers. The JFS Food Pantry, he said, was “two shelves and a kitchen cabinet.”

The increased resources and personnel allow the agency to accomplish more than ever, especially in the last 10 years, since Debbie Zoller took over as executive director. Rabbi Juda said, “It’s extremely gratifying to see the agency grow its commitment to excellence in every aspect, and the support we receive from the community.”

The service that put the early JFS on the map was the resettling of Russian immigrants in the Lehigh Valley. Beginning in the late 1970s, staff and volunteers helped refugees fleeing persecution in Russia find places to live and get jobs.

JFS enlisted doctors, dentists and others to provide healthcare and various services that the refugees required. Diane Silverman, resettlement coordinator from 1979 to 1994, reported great success with this. “I never had one single refusal when I called someone to participate in this program,” she said.

Staff and volunteers helped the newcomers find paid work too. “Many people went on to get very good jobs,” she said.

After the Soviet Union broke up, the program expanded, in 1996, to cover refugees from all over the former communist state. Marjorie Weiss, JFS executive director from 1988 to 1998 said, “I could name about eight or nine countries that they came from.”

One of the other great successes in JFS history was the founding of Beth Tikvah House. Before that, there was no culturally Jewish facility for older adults who needed assistance to go to live in the valley.

Michael Leader, founder of Leading Nursing and Rehabilitation Center and now CEO of its successor, Country Meadows, worked with Jewish community leaders to make this happen. “Being able to focus on the Jewish faith and culture at this point in life,” he said, “we were thrilled to be able to participate in that.”

Also helping older adults in the valley was the BenefitsCheckUp, which assists with applications for government benefits that clients may not even know about; the Go Program for those who need rides; and the food delivery service now known as Mazel Meals.

Newer additions include programs to improve accessibility and inclusivity at facilities throughout the community and the 50 Acts of Kindness initiative in celebration of JFS’s 50th anniversary, through which volunteers cleaned up cemeteries, did landscaping work at the Tikvah House for older adults with intellectual disabilities and at the JCC, collected school supplies for kids who needed them, and more.

It’s been a busy, productive and rewarding 50 years for JFS so far. The goal is to continue, but providing even more support wherever it’s needed in the community.

“I cannot predict exactly what JFS will look like over the next 50 years,” said current president Robin Rosenau, “but I am confident we will continue to position ourselves to meet our community’s human needs, whatever they will be.”