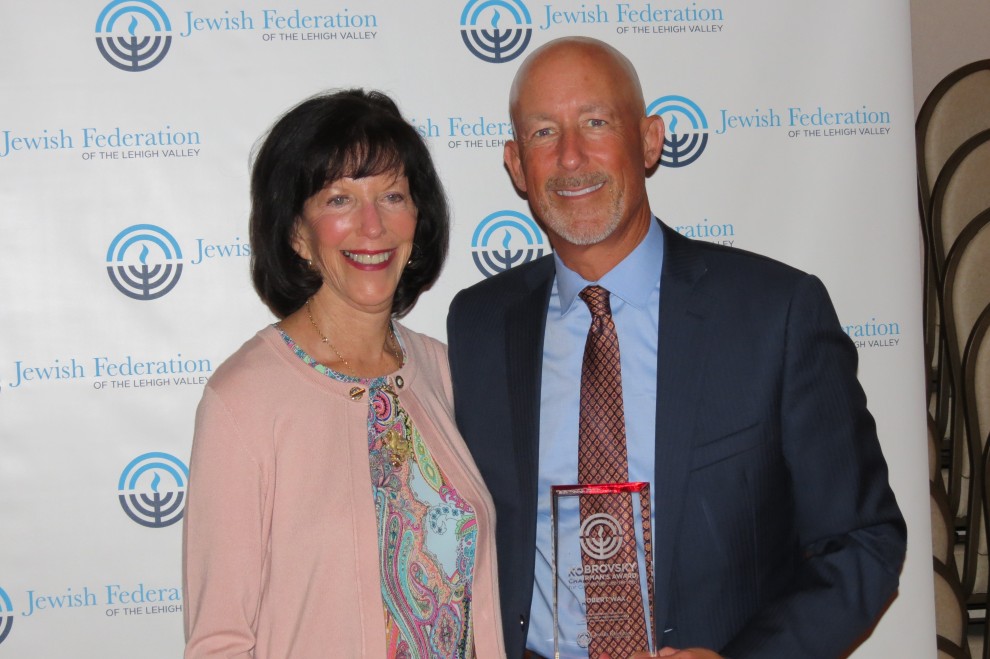 By Carl Zebrowski
Editor of HAKOL
It must have been the Israeli-style picnic that had guests arriving early for the 2022 Jewish Federation of the Lehigh Valley Community Celebration and Annual Meeting on Thursday evening, June 9.
Many of those in the Jewish Community Center’s Kline Auditorium before the 6 o’clock start time chose their seats and, once the caterers filled the food tables with colorful fare, wisely headed straight over. The kosher buffet featured falafel, hummus and pita slices, salads, and more, served by Around the Table Catering, the people who just won the 2022 Best Food Truck award from Lehigh Valley Style magazine.
After an hour of dinner and conversation, introductory ceremonies kicked off the business portion of the night. Jeri Zimmerman, executive director of the Federation, took to the podium. “It’s great to see so many of you here and to be together in person…,” she told the audience in her first live welcome address after two years of annual meetings via Zoom. “There’s no doubt that we have come through a period of transition.”
By night’s end, the Federation board members present in the audience had initiated another transition, voting in a new slate of officials. Robby Wax was elected president. The new vice presidents are Aliette Abo, Dr. Eric Fels, Dr. Bill Markson, and Dr. Israel Zighelboim. The secretary is Beth Kozinn, and the treasurer is Iris Epstein. The new board members are Rabbi Seth Phillips, Iris Epstein, Dr. Carol Bub Fromer, Gary Fromer, Lewis Gaines, Rachel Levin, Dr. Bill Markson, and Lauren Rabin.
Zimmerman paid tribute to outgoing president Gary Fromer. “He brings his passion, his energy and his generosity to our community. It is his can-do attitude that championed our successful operation for the past three years, particularly demonstrating leadership in the unprecedented time of pandemic.” She listed a few of the more noteworthy numbers logged during the tenure of this “numbers guy”: one synagogue merger, two community missions to Israel, $8 million dollars raised, and $550,000 in earned income tax credit funding.
Fromer addressed the unusual nature of his tenure, which began less than a year before the pandemic. “I felt like, wow, what is going to happen here and how are we going to deal with this crisis?” he said. “And what I’m most proud of across all of our community is the response of these volunteers, clerical leaders, community leaders to leave these organizations today in a better state than they were when I started three years ago. I would have never imagined that.”
Julia Umansky, the Federation’s director of gift planning and EITC, gave the final report on the five-year Life and Legacy campaign to attain commitments for after-lifetime giving. “We grew from $4.6 million pledged in the first year to more than double that number now, at the end of year five…,” she said. “While I joined this program during year five and cannot take credit for the amazing work that was done during years one through four, our wonderful community volunteers, donors and staff can.” To reveal the campaign’s final tally, preselected members of the audience walked to the front, each holding a large card with a number or character on it, and lined up: $10,462,489.00.
Presentation of the annual awards followed. The Kobrovsky Chairman’s Award for Campaign Leadership went to new president Robby Wax and his mother, Vicki Wax, for chairing the Federation’s annual campaign. The Daniel Pomerantz Award for Campaign Excellence went to Eileen Fischmann for her diligence in reaching out to campaign donors. A group from the Holocaust Research Center received the Mortimer S. Schiff Award for Prejudice Reduction for fighting hate and prejudice by educating people throughout the valley on the Holocaust.
The Mark L. Goldstein Award for Outstanding Jewish Professionals is given in honor of the long-time executive director of the Federation who died in 2018. In an emotional moment at the podium, Shari Spark, Holocaust Research Center coordinator and wife of the late Mark Goldstein, presented the award to Debbie Zoller, executive director of the Jewish Family Service, for leading a number of new initiatives and growing the organization since she took over in 2013. “Mark would proudly and loudly endorse this choice,” Spark said. “Debbie draws people in to serve the community and, in turn, she serves our community with an open heart.”
Lauren Rabin, a long-time volunteer and member of Women’s Philanthropy, received the George Feldman Achievement Award for Young Leadership for leading an initiative to increase Pomegranate participants and co-chairing the successful community concert by the Israeli band Hatikva 6 in 2019.
Robby Wax brought the night to a close with a new president’s report, looking forward to his term in office. “I’d like to think that I inherited some business sense from my father, but I know that I’ve mixed it with eternal optimism of my mother, and therefore I can conclude by saying I am truly excited for our future together…,” he said. “I’m excited about what we’re going to accomplish, most importantly, together.”