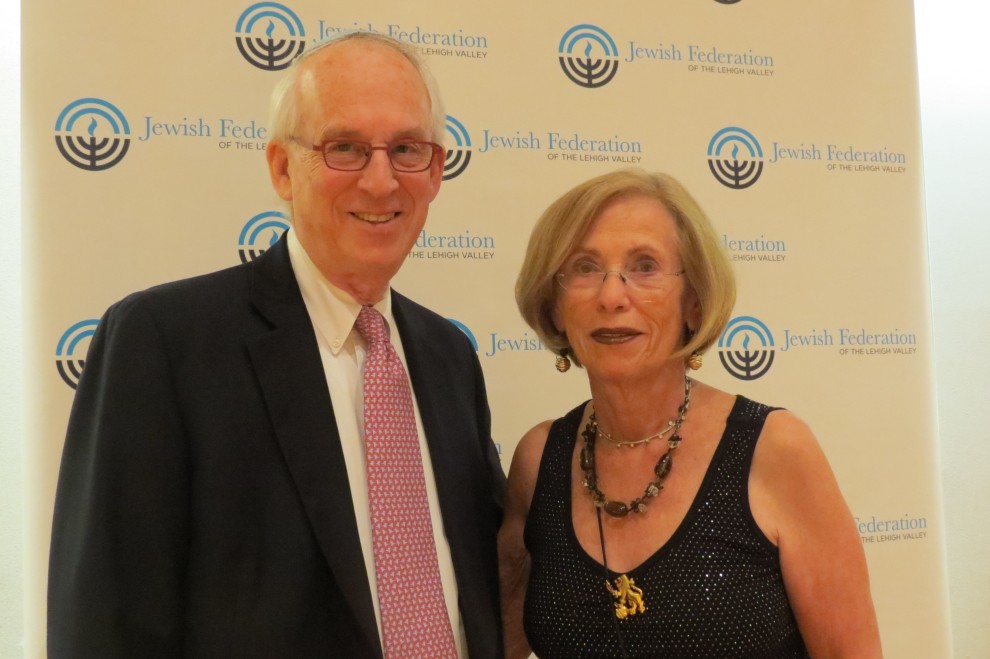 The Jewish Federation of the Lehigh Valley honored outstanding community leaders, bid farewell to a sitting president and elected a new one at its Community Celebration & Annual Meeting on June 14.

The event also celebrated the accomplishments of the past year and looked ahead to the future.

Chosen by a committee of her peers, Beth Kushnick received the George Feldman Achievement Award for Young Leadership this year. A visible and strong leader in the community, Kushnick serves on the Federation board, recently became a Pomegranate, chairs the Shalom Lehigh Valley Committee and has single-handedly spearheaded an effort to bring the Jewish Women’s Renaissance Project to the Lehigh Valley. A group of 18 local women are currently participating in the project and will travel to Israel at the end of June.

At Temple Beth El, Kushnick was a board member for many years, including serving as treasurer. She was also the Sisterhood co-president for six years. She has served on many committees at the Jewish Community Center and Jewish Day School, and recently helped Jewish Family Service to redesign their Centerpieces for Tzedakah.

“She is an extremely hard worker, a team player and someone who rarely says ‘no’ when asked to contribute,” read one of the nominations for Kushnick that the Federation received.

The Federation was also proud to honor Iris Epstein with the Kobrovsky Chairman’s Award for Campaign Leadership for her role as campaign chair the past three years.

Under Epstein’s leadership, the campaign was reinvigorated with creative challenges and a March Madness-style competition. She served as a source of motivation for campaign volunteers, frequently sharing the stories of people the Federation helps around the world – people she met first-hand through her travels with the National Young Leadership Cabinet.

“Volunteers play a crucial role in the success of our Annual Campaign,” said Jeri Zimmerman, assistant executive director of the Federation. “As campaign chair, Iris has reached out into the community, made connections and built relationships while successfully raising the funds that allow us to enrich the lives of those who count on our support. She is dedicated and committed to our campaign efforts and her diligence is to be applauded.”

Epstein also served, and will continue to serve, as the Federation’s treasurer and is a Lion of Judah. She is also very involved with Congregation Keneseth Israel. Next year, she will be leading the Federation’s Women’s Division.

“Being our community’s campaign chair has meant everything to me. It has been a privilege and an honor to serve in this role and to work with a marvelous team of professionals and volunteers in order to raise the much-needed funds to ensure our Jewish future,” Epstein said. “I have a much better understanding of the needs of our community and just how far each dollar raised can impact our world, here in the Lehigh Valley, around the world and in Israel.”

"We have a distinguished cadre of honorary officers and our Federation is honored to welcome Wendy Born as our newest honorary officer," said Mark L. Goldstein, Federation executive director. "She has a quiet determination that inspires others to action and she in not deterred by the complexity of issues we grapple in the Jewish community."

The Federation also bid a fond farewell to Mark H. Scoblionko, who served as president through challenging times for the Jewish world, beginning with a conflict in Israel and culminating in an increase in anti-Semitism in the U.S.

“I’ve gained a much better understanding – even though I was on the board for many, many years – of all the things that our professionals have to deal with,” Scoblionko said. “And I think that it has enhanced my Jewish identity and given me a greater appreciation for our Jewish community.”

Scoblionko passed the gavel to his good friend Eva Levitt, who, after decades of involvement with the Jewish community in the Lehigh Valley, takes on the role of president.

In her first president's report, Levitt laid out her three goals for her years as president: live up to the legacy left by her good friend Mark Scoblionko, bring more millennials into the Federation fold and, of course, raise more money.

"I, as president, can't do this alone," she said. "We all have to work together for our community and for the Jewish community throughout the world."