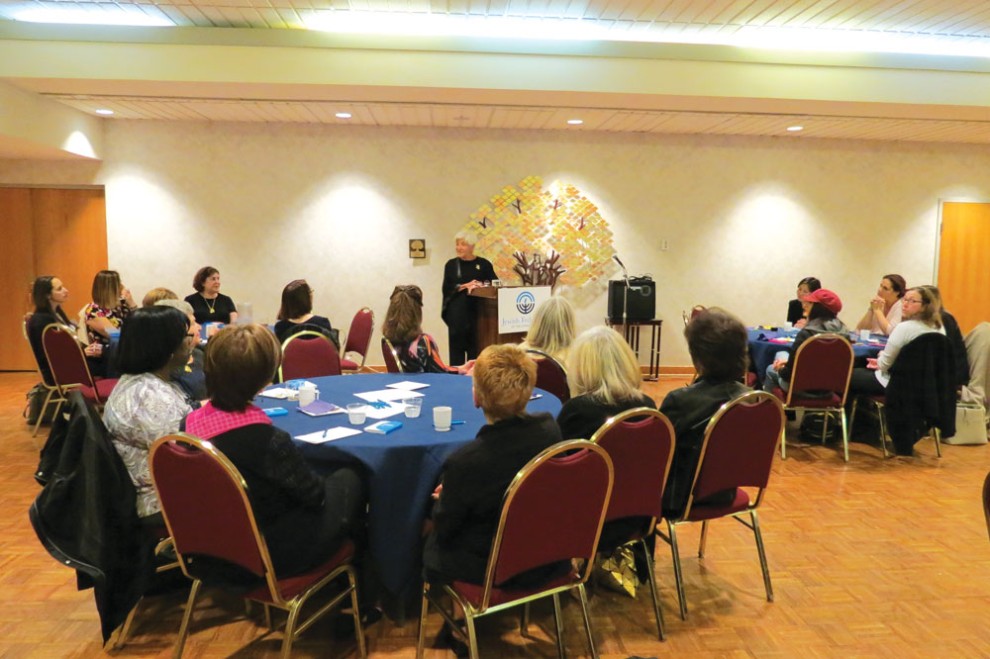 Don’t let life happen to you, Vicki Agron, a long-time leader in Jewish philanthropy, told the group of Lehigh Valley women sitting before her. Happen to your life.

Agron presented at a Jewish Federation of the Lehigh Valley Women’s Philanthropy event on Nov. 1 entitled “Living an Intentional Life.” In her talk, she shared her own philanthropic story and sought to inspire the women to be remembered the way they wish.

“What’s it gonna take to get to the legacy you want?” she said. “Plan the work and work the plan … You have the power to make it happen. You need to seize that power.”

Agron asked each of the women to draw a horizontal line on a piece of paper, their life line. She then asked them to draw a vertical line marking where they currently fall on the horizontal.

“At the end of days, what do you want people to say about you? That is a big question. It’s a heavy question,” she said.

Agron, now a grandmother, spoke of her first foray into Judaism, and Jewish philanthropy soon after, and how that has impacted her own life.

“I had a very unconventional conversion to Judaism in 1970,” Agron said. “There was no studying, there was no learning, the rabbi said to me, well, even though you were raised as a Christian, your father was Jewish, and so pick a name out of this book.”

“Abra cadabra,” she was Jewish, she said, but nothing else changed.

Gloria took her to a young women’s leadership meeting, sponsored by the local Jewish Federation.

“Someone got up and talked about the needs of the global Jewish people and they handed out envelopes with those stubby yellow golf pencils in them and every woman was writing something on the card and I said to Gloria, how much is it? And she said well, it’s whatever’s in your heart. Now, I didn’t know that what was in the heart of every young woman in 1972 in Denver, Colorado, was chai, $18 … so I wrote down $40 and I turned in the card.”

She quickly got a call from the Federation thanking her for her very generous gift. They asked if she could encourage three of her friends to participate in the campaign.

“And with no training, I did. I went and I met each of those three people … and each of them said to me, well, like how much? And I said, like $40,” she said. “And I turned in three cards with $40 and the next year they made me chairman of the division.”

“The truth of the matter is that the Federation raised me. The Federation was my Jewish mother. And the Women’s Philanthropy group in Denver, Colorado, taught me everything I knew,” she said.