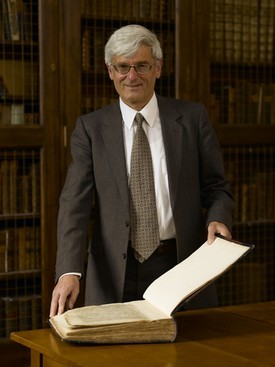 The Jewish Theological Seminary (JTS) is proud to announce that Shamma Friedman, Benjamin and Minna Reeves Professor of Talmud and Rabbinics at JTS, will receive the 2014 Israel Prize at a ceremony to take place on Yom Ha’atzmaut (Israeli Independence Day), which falls on May 6. The Israel Prize is Israel’s highest honor, awarded to those who are preeminent in their fields and have made extraordinary contributions to Israeli life and culture.

“Professor Friedman was selected in light of his remarkable endeavor to research the various forms of talmudic literature,” wrote the prize committee. “He has acquired an international reputation as a leading figure in the study of the Mishnah and Tosefta in questions regarding the literary structure and development of the text of the Babylonian Talmud, the development of motifs in Aggadic literature, lexicographical studies of rabbinic language and the study of rabbinic literature from the time of the Geonim and Rishonim.”

Friedman has been at JTS since 1958, when he enrolled in The Rabbinical School and, following ordination, became one of the first two JTS students to earn a PhD. He joined the JTS faculty in 1964.

“I am greatly encouraged by winning the Israel Prize,” Friedman said. “It gives me additional strength to face the challenges that lay ahead in researching talmudic literature. Receiving the Israel Prize is another expression of how much I enjoy my work and how each day I am rewarded anew by discoveries found in this vast tract of knowledge.”