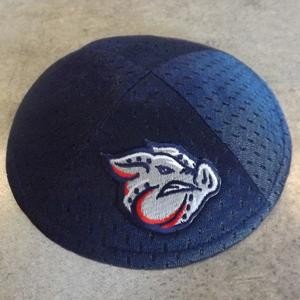 The Lehigh Valley IronPigs baseball team will be hosting their very first Jewish Heritage Night on Thursday, May 22, at Coca-Cola Park in Allentown. Perhaps even more groundbreaking is the recent decision by the IronPigs to license the official IronPigs kippah in recognition of the Jewish community of the Lehigh Valley.

“We’ve done some heritage nights over the years, but we haven’t had a Jewish Heritage Night, so it just seemed like a natural progression for 2014,” said Jon Schaeffer, director of new media for the IronPigs. As for the kippah, Schaeffer believes that the IronPigs are one of the only minor league baseball teams in the country to license an official Jewish head covering with the team logo.

The idea for Jewish Heritage Night and the kippah has long been in the mind of Barry J. Halper, president of the Jewish Federation of the Lehigh Valley and fan of the IronPigs since their first season six years ago. Halper began attending games as a partial season ticket holder in 2008, and enjoys bringing his family to baseball games so close to home.

“Jews and baseball have always had a strong connection,” Halper said in a recent interview. He is a fan of the major league team the Philadelphia Phillies, to whom the IronPigs feed players after seasons in the minor league. While attending a Phillies game, Halper noticed that the major league team had an official kippah for sale and this sent him straight to the IronPigs requesting that the team design their own kippah with the famous pig on top.

Of course, the IronPigs jumped on board with the idea. Halper contacted Adam Fondl, director of merchandise and his team at the IronPigs, and in December 2013, the team began selling their very own, official kippah. Halper was one of the first fans to purchase one.

“I like having an official kippah, and not a knock-off,” he said.

To Halper, though, his IronPigs kippah means more than supporting a baseball team. The team kippah is a symbol of community coming together to support each other and have fun. “The IronPigs are a wonderful organization and give a lot to the Lehigh Valley community in many ways,” said Halper. “The kippah and Jewish Heritage Night are ways of showing our Jewish pride in supporting the organization and a recognition of a very close, long-standing relationship between baseball and the Jewish community.”

Schaeffer, of the IronPigs organization, said, “I think we want to support every community of the Lehigh Valley, whether that is the Jewish community, other faith-based communities or other demographical areas.” Schaeffer’s work with Jewish Heritage Night is aligned with Halper’s expectations for the event -- to provide a connection for the Lehigh Valley and experience Jewish culture as a team.

“We say the IronPigs has something for the entire community. It’s a family-friendly venture for those within the city of Allentown and the areas that surround it, and we want to support the communities that make up the Lehigh valley,” Schaeffer said. “The Jewish community is certainly part of that.”

Halper proudly wears his new kippah to synagogue and is frequently given compliments or asked “Where can I get one?” The answer is online at the IronPigs website and also in merchandise stores at the stadium as the season begins.

Jewish Heritage Night will feature group tickets in which the group will be given the opportunity to purchase a baseball cap with “IronPigs” written in Hebrew on the cap. Along with the kippah and baseball cap, Jewish Heritage Night on May 22 will provide kosher offerings at the stadium and all can expect to participate in Jewish-themed games and music.

To purchase tickets for Jewish Heritage Night or purchase a kippah, go to the IronPigs website at www.milb.com.