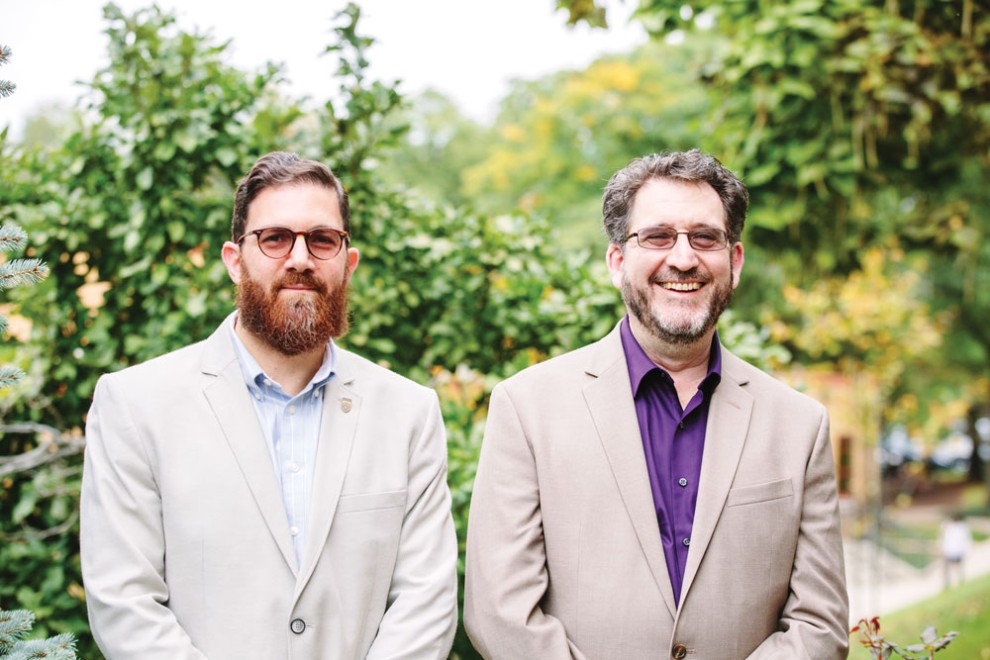 Lehigh University’s Dialogue Center is a bit more crowded these days, thanks to the recent hiring of two new chaplains.

The arrival of Walead Mosaad, Ph.D. as the new director of Muslim student life marks a historic beginning for religious life on campus. The return of Rabbi Steven Nathan as the interim director of Jewish student life celebrates a happy homecoming.

“We are excited to welcome this fall two exceptional individuals to work in religious life at Lehigh,” said the Rev. Dr. Lloyd Steffen, university chaplain and professor of religious studies. “Rabbi Nathan brings years of experience in campus work to his position directing Jewish student life. I am certain his enthusiasm, high energy, and sense of humor will allow him to make many friends and build not only the Hillel program, but some of the inter-religious encounter activities of the Chaplain’s Office.”

“Walead Mosaad,” said Steffen, “is an internationally known scholar and religious leader who in his short time at Lehigh has already made lots of connections both on and off campus. He’s in demand as a speaker and already this semester has accepted invitations to speak at Claremont and Princeton. He is a patient and kind teacher, able to listen and receive all kinds of questions with openness and understanding. His presence here is a great move forward, not only in helping to meet the spiritual needs of Muslims on campus, but in recognizing religious life as a core concern in our university efforts to promote and celebrate diversity.

“I look forward to members of the community getting to know both Steven and Walead. I assure those who invite them to programs or who stop by to meet them that they are in for a treat.”

Walead Mosaad knew his way around the Lehigh campus well before becoming its first director of Muslim student life in August. The newly-minted Ph.D. frequently visited Linderman Library while completing his dissertation research. In the spring, he gave community classes in religious literacy at the invitation of the Muslim Student Association, which in past years also hosted him as a guest speaker.

Mosaad is the university’s first Muslim chaplain and the first hired at any of the Lehigh Valley’s private colleges. He brings big-school experience to the newly created role. As a chaplain for the New Brunswick campus of Rutgers University, Mosaad once provided pastoral care, religious education, and interfaith leadership to 35,000 students.

Lehigh’s proximity to home and small, liberal arts environment suits its well-traveled new director. For nearly two decades, the global Islamic scholar has traversed the world to engage with Muslim communities in both the U.S. and abroad.

“I love working with people. That's the main aspect of it,” says Mosaad. “I love to engage with people, counsel them, help them. If someone's not clear about something, I can be that ‘someone to talk to.’”

The urgency of engagement

In today’s multimedia marketplace of ideas, Mosaad cares deeply about where people shop for knowledge.

“It's easy for someone to search on Google, or turn on a TV, and find ideas about any faith tradition that may contradict or clash,” Mosaad says. “It leaves people confused.”

He argues that while social media and the internet offer vast sources of information, the access comes at a cost.

“We live in an age of increasing social isolation. The irony is that we have this ubiquitous social media—yet at the same time, people feel alienated on a face-to-face, real down-to-earth level,” says Mosaad.

The loneliness can lead the vulnerable down a dangerous path.

“Contrary to popular belief,” says Mosaad, “people aren’t radicalized because they go to the mosque, or the church, or the synagogue. It happens because too often they’re sitting alone in their bedroom, surfing the internet.”

So, Mosaad advocates for engagement. “I think it's essential that we have qualified, credentialed members of the community such as chaplains available—real, live practitioners of religion who are there for people to consult with. That’s especially true at a university campus, where people are still forming their identities and ideas.”

A big tent approach to chaplaincy

Mosaad identifies as “a committed, practicing Muslim.” But he views himself as a chaplain for all faith traditions.

“It’s my hope that this position is seen not just as a resource for Muslims, but for everybody,” he says. “I hope to show that faith-based tradition is still a vibrant and relevant way to engage with contemporary issues, although many may not think that is the case. I think part of our mission here is to show that it’s possible.”

In the very best of ways, Steve Nathan is right back where he started.

Rewind 27 years, to academic year 1990-91. It was the year that Lehigh dedicated its new Rauch Business Center, Sen. Bill Bradley spoke at commencement, Lloyd Steffen became the new university chaplain, and then student-rabbi Nathan assumed his first professional post as director of the Lehigh Hillel.

After two years at Lehigh, Nathan spent two more years in the area, serving as a student rabbi for Am Haskalah, a Reconstructionist congregation in Allentown.

In 1994, Nathan received his ordination and a master’s in Hebrew letters from the Reconstructionist Rabbinical College. He had previously earned a bachelor's degree in human development from Boston College and a master's in psychological counseling from Teachers College, Columbia University.

Nathan would go on to serve the Jewish community wherever it called him—as a spiritual leader, educator, counselor, program developer, and writer whose work focuses on Torah, Judaism, and mindfulness.

But of all the pulpits and offices he’s occupied, it’s the energy uniquely found on a college campus that’s brought Nathan back, full circle, to Lehigh.

Nathan rejoined Lehigh in August to serve as the interim director of Jewish Student Life and Hillel. His return fills the vacancy created in July 2017 by Rabbi Danielle Stillman’s departure. Most importantly, his presence on campus ensures the continuity of Jewish student support and Hillel programming as a national search to fill the position takes place.

As a congregational rabbi, Nathan has lead religious services in a variety of Jewish denominations and settings. Educational programs under his purview have tackled topics ranging from social justice, politics and bioethics to gender, sexuality and body image. He’s developed curricula for both youth and adults and provided psychological and pastoral counseling to children, teens and families.

College chaplaincy is a familiar beat for Nathan. He’s been the resident rabbi at Hampshire College in Amherst, Massachusetts and at Colgate University in Hamilton, New York. Through his campus outreach efforts, Nathan has often been the Jewish voice on interfaith initiatives and a staunch supporter of the LGBTQ community. He’s already making those same connections at Lehigh.

“I’m here to serve everybody,” said Nathan. “Working together with the Chaplain’s Office, Hillel and the multifaith community, my hope is that we can partner on matters of social justice and identity all across the campus.”

Nathan loves talking to students and hearing their ideas. He values their perspective on the world, and it shows in the inspired way that he’s working to reinvent Jewish life at Lehigh.

The new interim director wasted no time connecting with the Jewish groups on campus. He meets weekly with the Hillel board of directors, seeking their feedback on everything from Shabbat and holiday menu planning, to social programming, to the renovations they’d most like to see at the Jewish Student Center.

Alpha Epsilon Pi (AEPi) recently named Nathan its adviser. He’s met with representatives from Challah for Hunger and the Tamid Investment Group. Meanwhile, his calendar is filling rapidly with small-group educational and outreach opportunities, such as “Coffee, Tea and Torah.” He looks forward to connecting with staff, faculty, and the Lehigh Valley faith community as well.

“I want people to know that there is an active, vibrant Jewish community at Lehigh for people across the spectrum — secular, cultural, or more traditionally observant Jews. And that Hillel is a home for everyone on campus.”