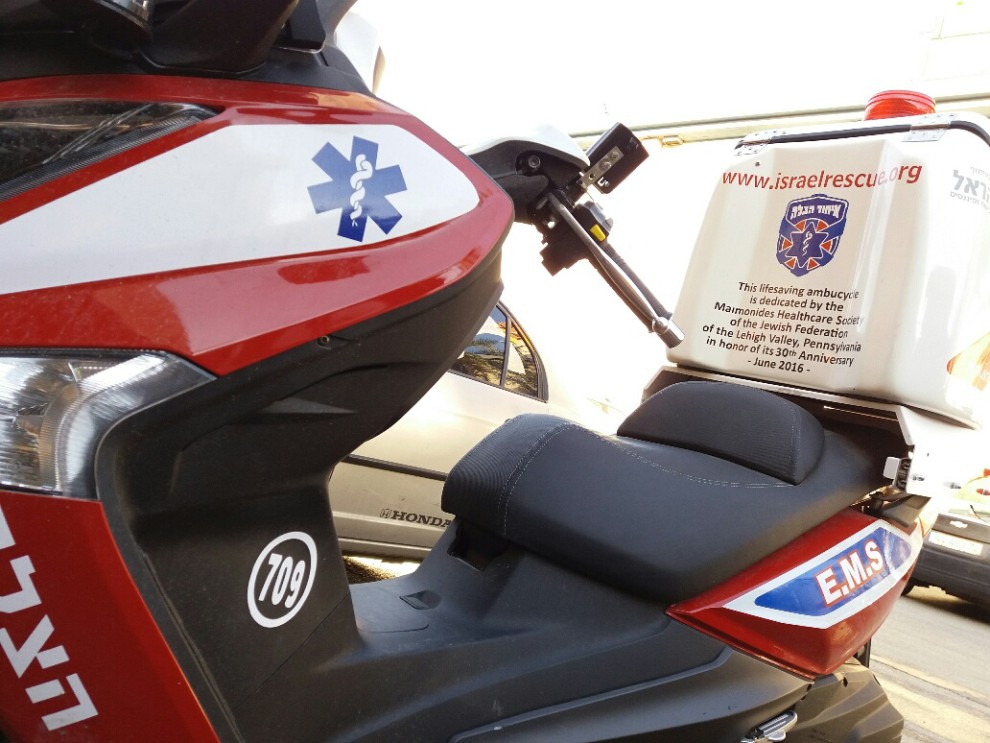 Editor’s Note: With sponsorship money from its 30th anniversary celebration last year, the Jewish Federation’s Maimonides Society was able to purchase a new ambucycle, a vehicle used to reduce response times on Israel’s crowded streets. Below is a report from United Hatzalah about the work of our ambucycle and its rider, Daniel.

Our ambucycle, #709, is on the roads and saving lives every day. Its rider Daniel, a resident of Ma'alot, is an extremely dedicated and active volunteer who is always on the alert for the next call from United Hatzalah dispatch.

On a recent Shabbat, Daniel was in the middle of dinner when he received an alert for chest pain. He jumped up from the table and hopped on our speedy ambucycle, racing to the address and arriving first. A 60 year-old man was clutching his chest, pale and sweating – classic signs of a heart attack. The experienced medic provided aspirin to reduce cardiac pressure, administered oxygen, monitored his condition until an intensive care ambulance arrived 15 minutes later and then returned to his family to finish his meal.

Later that night, he was heading to bed at 11:30 p.m. when he was alerted to a child having an allergic reaction. He hopped on our ambucycle once again and raced to the address. Anxious parents directed the medic to their young child, who had broken out in hives despite having no known allergies. As soon as an ambulance arrived, the young family was transported to the hospital.

At 2:30 a.m., Daniel was awoken by the shrill sound of his United Hatzalah walkie-talkie calling for severe difficulty breathing. Without hesitation, he ran down the stairs, hopped on the ambucycle, and sped along the dark roads to administer high-flow oxygen to the 32 year-old man, who was in severe respiratory distress. By the time an ambulance arrived seven minutes later, the young man's condition had stabilized and he was immediately rushed to the hospital.

Just a few hours later at 7:30 a.m., Daniel yet again raced to the rescue of a 56-year-old man who was experiencing terrible chest pain. As it happened, Daniel knew the man from the neighborhood and was able to reassure him as he provided emergency medical treatment and helped transfer him to the ambulance when it arrived.

In the middle of morning services, Daniel's United Hatzalah walkie-talkie buzzed once more, and he slipped out unobtrusively, jumped on our ambucycle, and raced to the scene. A young girl had collapsed in seizures in the street. She was suffering from a dangerously high fever, and Daniel cooled her with damp towels, administered oxygen and took her vital signs until an intensive care ambulance arrived 12 minutes later.

Daniel, a volunteer, responded to a total of eight calls over the course of that Shabbat! He was first to arrive to every single one of these calls. This is only due to the speed and agility of our incredible ambucycle.

The Maimonides Society thanks its supporters of its of 30th anniversary celebration, which made the purchase of this ambucycle possible. Our support has made an impact on so many people's lives!