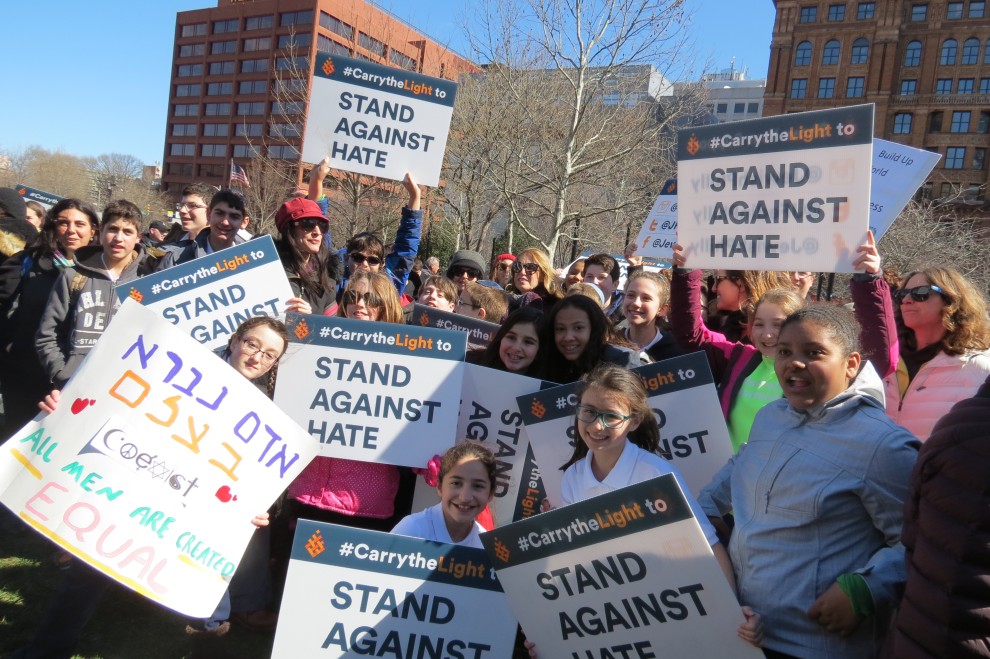 More than 40 representatives from the Lehigh Valley, including a large contingent of middle school students from the Jewish Day School, joined with thousands of others on Independence Mall on March 2 to stand up against hate. The rally was held in response to the recent vandalism at a Jewish cemetery outside Philadelphia and the bomb threats that have terrorized Jewish community centers and other Jewish institutions.

“This kind of hatred, this kind of intimidation, will not be tolerated in this commonwealth,” Wolf said.

“When you target someone because of what they look like or who they love or who they pray to, no matter who is being targeted, we are all less safe,” Shapiro said.

The Jewish Federation of the Lehigh Valley worked with the Jewish Day School and synagogues across the community to organize the trip.

“It was important for our community, and especially our students, to stand up and be present for this historic moment,” said Aaron Gorodzinsky, director of outreach and community relations at the Jewish Federation. “Not just for the Jewish community, but for all of the communities faced with hate and intolerance.”

“When I was a child, I marched for Soviet Jewry and that has made an impact on my life,” said Amy Golding, head of school at the Jewish Day School. “When I saw the Jewish Federation was organizing this trip, I knew how important it was to take our students to have their voices heard.”

With the help of the National Museum of American Jewish History, speakers were also able to tell the stories of some of those buried at the vandalized Mount Carmel Cemetery, including Blanche Reisman, who passed away at age 9 from illness in 1917, and Kate Fisher-Glass, who emigrated to America and lived in Philadelphia until she died in 1944 at age 83.

This was especially moving for Zoe Lachter, a sixth grader at the Jewish Day School. “I liked hearing the stories because it gave examples of real people,” she said.

The rally was “inspiring because all the people who gathered there – we were all different, but so close at the same time,” said Chloe Levi, another sixth grader. “It was inspiring to see everyone together.”

“I thought it was very touching and I really agreed with everything that was said,” said Yuval Shimoni, an eighth grader.

In between verses of “This Land is Your Land,” Cantor Ellen Sussman of Temple Shirat Shalom reflected on her experience at the rally. “I think it’s wonderful that the Jewish community is coming together to stand up against hatred and violence,” she said. “We have to work together.”

As a representative of both the Easton Jewish community and the leader of the Lehigh Valley Jewish Clergy Group, Rabbi Melody Davis of Temple Covenant of Peace felt it was important for her to attend.

“It’s important for each of us to realize no one else can stand up for us,” Davis said.

See more about the national response to anti-Semitism on pages 16-17 of HAKOL.