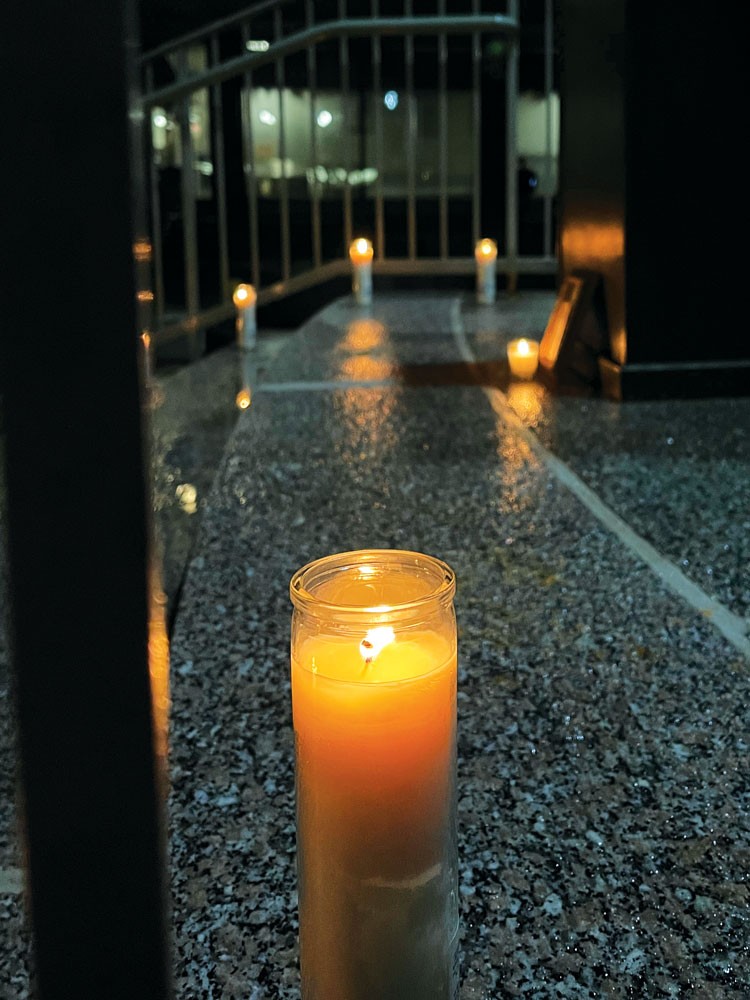 “When I am dead, bury me
In my beloved Ukraine,
My tomb upon a grave mound high
Amid the spreading plain,
So that the fields, the boundless steppes,
The Dnieper's plunging shore
My eyes could see, my ears could hear
The mighty river roar.”

This passage is taken from a longer statement from Pereyaslav made in 1845. It was read aloud on March 9, when members of the Jewish community and others joined together at Payrow Plaza in Bethlehem, to hold a candlelight vigil and stand in solidarity with Ukraine in the face of the war Russia has started there.

The event was organized in partnership with the Jewish Federation of the Lehigh Valley, the Bethlehem Interfaith Group, and local Ukrainian groups. BIG President Rev. Beth Goudy started off the night on their behalf, saying, “With people of good faith from around the world, we lament the unprovoked incursion of the Russian armed forces into Ukraine, and the war that has resulted in unimaginable death, destruction and the dislocation of so many innocent noncombatants. While we know that words alone are an insufficient response to evil, we are required to speak out and bear witness to the truth we know.”

Her statement went on to celebrate “the common humanity of those individuals, faith communities, non-profit organizations and nations that have stepped up in compassionate and creative ways to relieve the suffering of the Ukrainian people, and pledge ourselves to support their efforts in ways both spiritual and tangible.” Which is what was highlighted on this cold and rainy night in Bethlehem.

Both Rabbi Melody Davis of Congregation Bnai Shalom and Rabbi Michael Singer of Congregation Brith Sholom led moments of song. Church leaders from all over the Lehigh Valley spoke, prayed, and sang. People in the crowd held candles, flags, and signs. Some FaceTimed others and live-streamed the event.

The night concluded with a two-minute long moment of silence in solidarity with Ukraine.

The Jewish Federation of the Lehigh Valley has launched an emergency response campaign to provide much-needed support to Jewish victims of the war in Ukraine. Over $65,000 has been raised by over 200 donors so far to provide humanitarian supplies, refugee aid, emergency relief to homebound older adults, Holocaust survivors, and people with disabilities who are unable to leave the country, and help for aliyah to those who have been able to escape the crisis.

Special thanks to the Brotherhood of Ukrainian Clergy in the Lehigh Valley, Ukrainian National Women's League of America Branch #91 Bethlehem, and the Bethlehem Interfaith Group, our partners in bringing the community together.

To donate to the Ukraine emergency fund, visit jewishlehighvalley.org/ukraine-response.