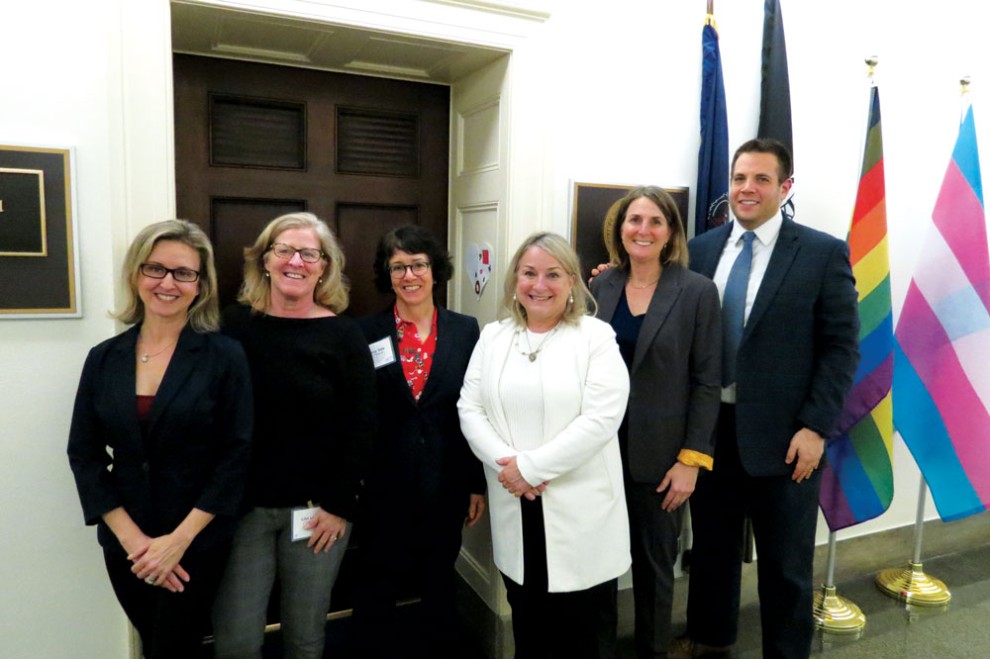 Tuesday, Feb. 4 was the 10th annual Jewish Disability Advocacy Day (JDAD) in Washington, D.C., but it was the first time that staff from Jewish Federation of the Lehigh Valley and Jewish Family Service traveled together to participate in the event. Four staff members made the trip to Capitol Hill to lobby Congress for disability rights.

“We felt very strongly that we wanted Jewish Family Service of the Lehigh Valley and Jewish Federation of the Lehigh Valley to be represented in the advocacy discussion on a national level. We found a great deal of inspiration being in a room with other Jewish social service agencies from all over the United States advocating on behalf of our clients,” said Axelrod-Cooper and Karp.

“It was wonderful for our community to be able to be a part of fighting for inclusion so that all members of our community can have access to the same rights and opportunities,” agreed Aaron Gorodzinsky, director of campaign and security planning for Federation.

Organized by the Jewish Federations of North America and the Religious Action Center of Reform Judaism, this year was the largest ever JDAD. The purpose of the event is to organize Jewish leaders to learn about and advocate for disability issues and rights on Capitol Hill. In addition to advocacy training and presentations on the issues of the two pieces of legislation which the delegates from Jewish communities across the country were there to lobby for, there were also panels and award presentations.

Rabbi Deborah Waxman, president of Reconstructing Judaism, delivered the D’var Torah, in which she said, “We advocate out of recognition that people with disabilities deserve to live in a society where both the laws and the culture reflect and address their full humanity.”

Two significant anniversaries were acknowledged—the 30th anniversary of the passing of the Americans with Disabilities Act (ADA) and the 45th anniversary of the IDEA act, which opened public school education up to all children, regardless of ability. These milestones were marked by special speakers, including retired Sen. Tom Harkin, who was instrumental in passing these acts, and Judy Heumann, an internationally-renowned disability rights activist, both of whom were recipients of awards acknowledging their legacies.

When asked to reflect on what life was like before the ADA was passed, Harkin, whose decades in Congress fighting for disability rights was inspired by his deaf brother, recalled “a life of separation from family, friends and community, and severe limitations on what you could do and where you could go. It was a life of constant struggle for people with disabilities.”

That was what has been overcome in many ways, but there is still more potential to be realized. Which is why participants were given tips on how to make compelling asks to the legislators with whom they had appointments that afternoon. After hearing from other members of congress such as Rep. Max Rose, Rep. Jamie Raskin and Sen. Tammy Duckworth, another award recipient, the Lehigh Valley contingent was ready to head off with colleagues from Pittsburgh to lobby their representatives.

Meeting with Rep. Mike Doyle, a senior legislative assistant from Rep. Guy Reschenthaler’s office and the Lehigh Valley’s own Rep. Susan Wild, the group was able to present their case for the ABLE Age Adjustment Act (S. 651/H.R. 1814) and the Isaiah Baker and Margie Harris-Austin Act (H.R. 5443)/Ensuring Access to Direct Support Professionals Act (S. 3220). These would extend the age of disability acquisition to 46 for ABLE accounts, a state-run savings program for individuals with disabilities, and allow care providers to sustain continuity of care even when their clients are hospitalized, respectively.

The day left the Lehigh Valley Jewish communal professionals inspired and energized to work to make the Jewish community in the Valley even more active and inclusive. JFS staff are planning to take what they learned at JDAD and directly apply it to JFS’s ongoing disability advocacy programming.

The motto of the disability rights movement is “Nothing About Us Without Us.” If you would like a seat at the table to have your voice heard about what you would like to see in the Lehigh Valley Jewish community to make it more accepting and inclusive for individuals with disabilities, contact Jewish Family Service at 610-821-8722 or info@jfslv.org to become involved as future programming is developed.