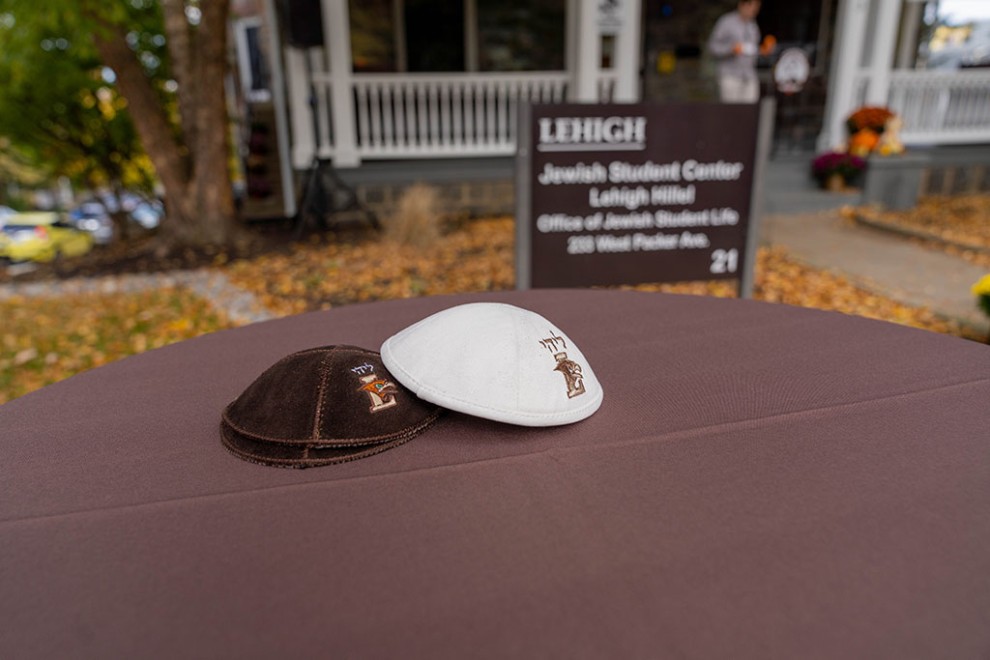 By Carl Zebrowski
Editor of Hakol
The Lehigh University Hillel has had a new home for over a year. The building is larger and more comfortable than the old one. Attendance at events is up. But due to the pandemic, there was never a proper grand opening. Until October 16 of this year.
Around lunchtime that Sunday morning, dozens of students, alumni, administrators and community members – and tables brimming with food – filled the front lawn at 233 West Packer Avenue in Bethlehem for the official dedication of the new Jewish Student Center.
Standing at a podium on the front porch, Rabbi Steve Nathan, endowed director of Jewish student life and associate chaplain at Lehigh, was enthusiastic about finally being able to celebrate the opening of the new hub for Jewish students on campus. “We did move in here in March 2021,” Nathan said, “but we know what March 2021 was like.”
He highlighted some of the benefits of the new location over the old. “It’s at least twice the size, and in better shape, and university-owned,” Nathan said. “We don’t have to worry when the furnace breaks down.”
University ownership of the site makes clear where Lehigh stands. As Rabbi Michael Singer of Bethlehem’s Congregation Brith Sholom said afterward, “The fact that the university understands the importance of Jewish life and creating a place on campus that is welcoming for Jewish students is a tremendous leap forward.”
Retired Lehigh Professor Roger Simon, who led the effort to put a down payment on the original Hillel House 40 years ago, attended the event. “We were a group of amateurs running a building and worrying about the furnace and the insurance and the garbage collection and fixing the roof and all these things,” he said.
The inside of the new building was said to be comparatively grand. “This building is more comfortable,” said Nathan. “Plus there is a much better and more modern kitchen. It also provides twice as many rooms for studying and more office space for staff, along with a living room and game room and lounge for students to hang out and relax.”
Nathan thanked Seth and Linda Horowitz of the New York City area for their support. Linda is an alumna of Lehigh and they have two sons who graduated from here. The older one graduated before the new student center opened. “Why didn’t they have this when I was here?” Seth said he told him, half-jokingly. But the most important consideration has always been just having an inviting location to gather. “The Hillel building,” Seth said, “the older one or this one, was really a second home for them.”
Alex Margulies, a freshman, said they have attended events at the new location and have been inside a few times. “It’s just been a really nice welcoming place,” they said, “especially for a freshman, because I don’t know that many people. It’s just been great to have some place to meet with the greater Jewish community.”
Things have been going well so far this year, said Hillel copresident Max Colen. “The new center is a great place for students to work and collaborate and overall just have a great sense of community, because during the pandemic there really wasn’t much of that. This year we had the biggest Shabbat we ever had.”
Everyone is welcome, said copresident Elisa Lipkin. “It’s also very inclusive,” she said. “There’s so many students of different backgrounds that come here.”
All of this bodes well for Lehigh’s Jewish students heading into the future. As Rabbi Singer said, “It’s great to have the right rabbi in Steven Nathan, a brand-new building, exciting growth of the Jewish population at Lehigh, and a place where students can come together, Jewish and non-Jewish. They get to create the community that they want, and this gives them that opportunity.”