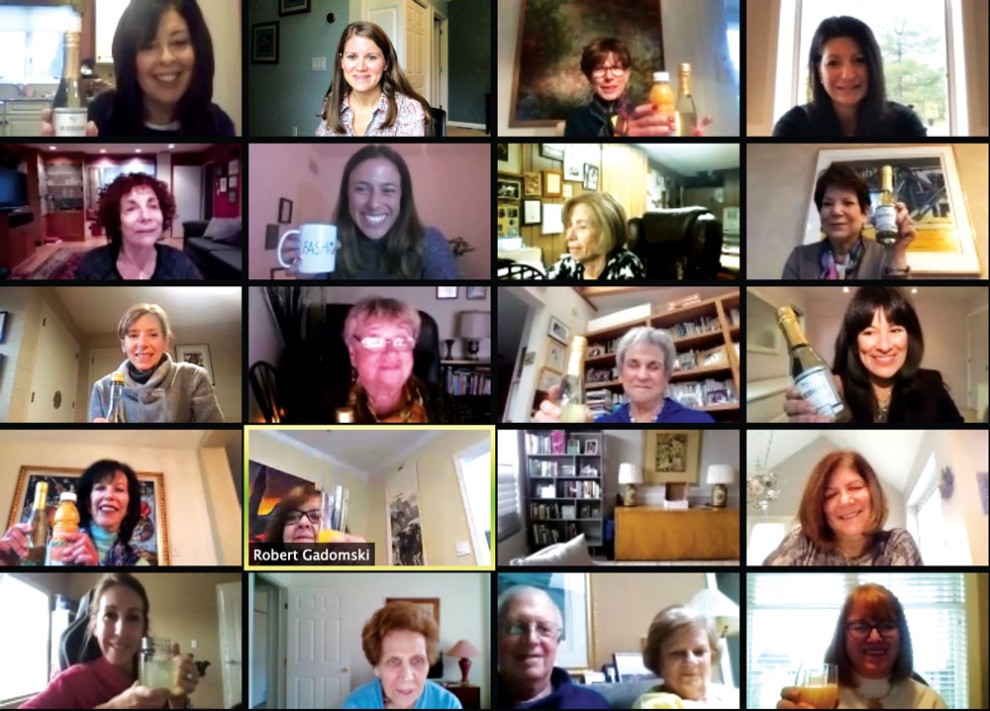 On the morning of Sunday, Nov. 15, Jewish women philanthropists from around the Lehigh Valley got together to tour “Israel Through Fashion”—without leaving their own homes. Thanks to the powers of Zoom, they were able to meet with each other as well as two young professionals in the fashion industry who were sitting in Israel at the time.
This kick-off to the 2021 campaign year brought Pomegranates and Lions of Judah together for an exploration of Tel Aviv’s vibrant fashion scene.

But first, Women’s Philanthropy board members took the time to thank the donors and remind them of the mission of
the Annual Campaign for Jewish Needs.

“You show others how to put Jewish values into action,” said Carol Bub Fromer, Women’s Philanthropy president, who welcomed the guests.

Vicki Wax, co-chair of the Annual Campaign, updated the group on fundraising goals. She thanked the younger generation for taking up the torch of these efforts, saying, “It is such a blessing to live in a community where we really do see l’dor v’dor.”

Laurie Wax, Lion and Pomegranate event chair,. introduced presenter Liraz Cohen Mordechai, founder of Fashionating by Liri, who has a master’s in fashion merchandising from the Fashion Institute of Technology in New York. Mordechai started her social enterprise in 2016. The company’s mission is to bring Israeli fashion to the first tier and empower Israeli fashion designers, brands and companies while telling Israel's story through the new and unique perspective of fashion. She has given over 200 similar lectures to organizations across North America.
Mordechai described Tel Aviv as a big city of culture, fashion, art and start-ups, where the old meets the new.

“It is international and at same time, very local,” she said.

A special guest was introduced from Israeli fashion house Maskit. Sharon Tal is the woman responsible for resurrecting Maskit in 2013 after its doors closed in 1994. Tal, who was head of embroidery for Alexander McQueen in London before returning to Israel and reopening Maskit, was able to join the Lehigh Valley Lions and Poms over Zoom and modeled some of the brand’s most iconic designs for them.

Tal spoke of the inspiration she receives from the land of Israel itself, showing moodboards with images captured from landscapes and a scarf patterned after the national bird of the nation.

“I was in the desert half an hour ago,” said Tal, who relishes the opportunity to get out into nature and then to come back to her hometown of Tel Aviv and create beautiful textiles in her open studio based on what her muse, Israel, has shown her.

She is doing her part to support the art of others, as well. Currently, a curated selection from 30 different small Israeli designers is available on Maskit’s website, an effort to help them weather the COVID-19 lockdowns.

After Mordechai took back the screen, she guided the women to their next virtual destination through a video visit to ATA. While Maskit had been created for high fashion, ATA was the manufacturer of clothing for the workers of Israel. It has a similar story in a recent relaunch, but while Maskit has stuck to its original audience, Mordechai said ATA is more of a Tel Aviv hipster staple than the uniform of the everyman these days. In the footage, she modeled their iconic tembel hat, which they still make today.

The last stop on the tour was Kuchinate, which is a psycho-social project for asylum seekers from Africa who have settled in Tel Aviv. Using their traditional craft of crochet, the women who participate at Kuchinate are able to find community in a safe space with others like themselves and process their emotions while using their skills to earn money at the same time. They crochet baskets, dolls and other items for sale, where all the products come from their own ideas.

“What’s cool about Tel Aviv is really the whole idea of everyone can fit in. It’s really open to welcome with open arms every person. You can be as creative as you like, and you will fit in and find your space. The blend and mix is really what is making Tel Aviv so vibrant and creative,” said Mordechai.

After a Q&A session, the group closed out the event by all raising a glass sent to them prior to the event to toast together in unison.