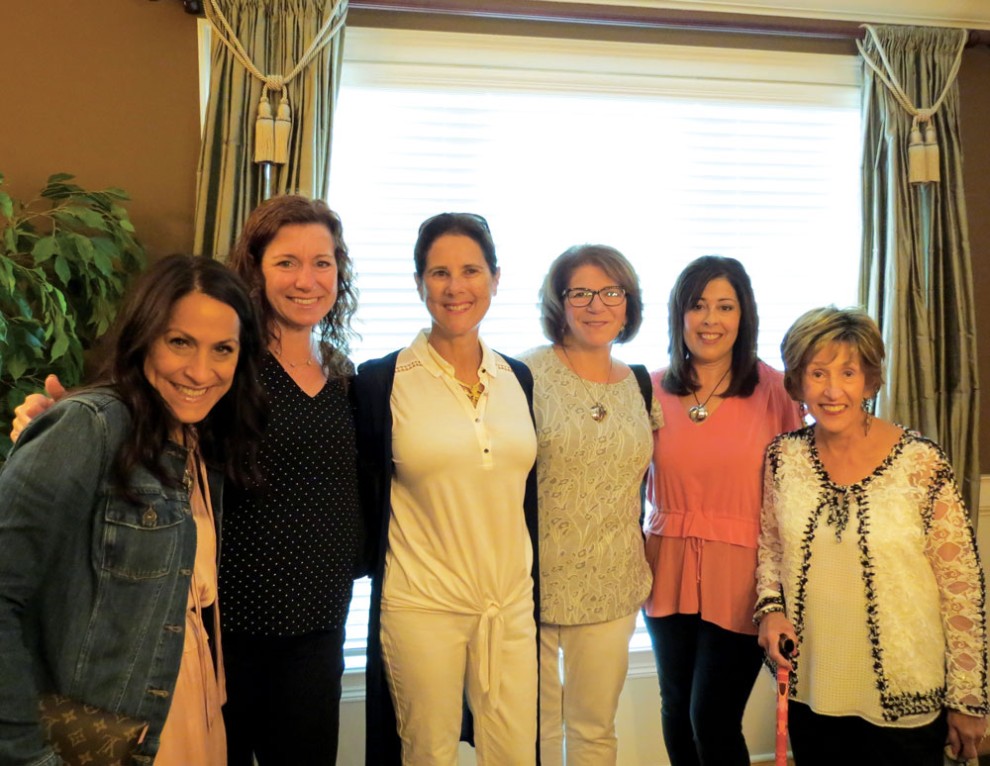 There was a lovely array of delicious Mediterranean-style foods in the kitchen, but most of the crowd was in the dining room, which had been turned into a mini-jewelry store for the night. The Megemeria Collection, the line of silver and gold jewelry hand made by Ethiopian students for the Israeli brand Yvel, was on full display, and had caught the eye of the guests gathered for the Lion of Judah and Pomegranate Spring Recognition on June 4, graciously hosted by Roberta Epstein in her Allentown home.

Eventually, the ladies made their way in to partake of the buffet and bar, including a signature pomegranate cocktail, before settling in to listen to the night’s speaker. Daniel Sahalo, U.S. Manager for Megemeria, was introduced by Iris Epstein and Amy Fels. Epstein reminded the women gathered that through their gifts to the Annual Campaign for Jewish Needs, “we are change agents responsible for changing lives for the better here and all over the world.”

Fels echoed the sentiment by “expressing how proud [she is] to be part of this amazing group of women.”

Changing lives, like Sahalo’s. Born in Ethiopia to a farming family of 11 children, his parents sold everything they had just to afford the guide to lead them out of the country, which had been torn apart by civil war. He walked barefoot eight weeks through the desert to a refugee camp en route to Israel, his final destination, which he eventually reached via a four-hour flight packed into a cargo plane through Operation Moses in 1984, at the age of five. His only sister contracted malaria on the journey and died.

“It was all my parents could do to stop, dig a grave to bury her, and continue on,” Sahalo shared.

Despite their hardships, his family did eventually make it to Israel, where they started life over in a strange land of modern conveniences, like toilets and electricity. They believed that all they had gone through was worth it, however.

“The bottom line for my parents was to get a better life for their kids. And, I think they did because look where I am—Allentown,” Sahalo joked.

Sahalo grew up in Israel and went on to serve in the Israel Defense Forces in the 101st Paratroopers Brigade. This time, when he saw the army plane, it was with pride knowing that he was going to be riding in it to serve his new home.

After enrolling in the officers’ academy, he finished his active service as a captain. He is still in the reserves today, though he went on to Hebrew University and studied international relations. He worked for the American Jewish Joint Distribution Committee for almost 20 years, coordinating programming for older adults all over Israel. Now, however, he is dedicating himself full-time to the mission of the Megemeria School of Jewelry & Art, run by Yvel, helping other immigrants like himself.

“About four years ago, I visited a very unique place,” said Sahalo. That was Megemeria, started by Orna and Isaac Levy in 2010 to serve single Ethiopian mothers in their 30s-50s in Israel. It has grown and is now open to all immigrants needing help at a fresh start in the promised land. Twenty-one students each year receive a monthly stipend so they can focus on learning gold-, silver- and gemsmithing, as well as other skills to help them with acculturation into life in Israel. Meaning “Genesis” in Amharic, the native language of Ethiopia, Megemeria offers its students the opportunity for a bright new beginning in life.

The ladies gathered at Roberta’s house watched a short video telling them about how Isaac Levy was also an immigrant himself, making aliyah from Argentina, and hoping to make high-end jewelry in Israel. His wife Orna grew up around pearls. Together, the couple are now a dynamic team creating beauty in both their wearable artwork and with the social impact of Megemeria. The Levys are proud that today over 90 percent of Yvel’s more than 100 employees are immigrants hailing from 23 countries. Many are graduates of the school, employed to design and create a jewelry collection inspired by their personal journeys of longing and renewal. All proceeds from sales of the Megemeria collection benefit the school and social business, ensuring that Megemeria continues to cultivate positive social change.

Sahalo ended the night with answering questions from the group. He reminded them that “Israel is the America of the Middle East—people will do anything to get there.” That made the shopping which followed at the pop-up jewelry store in the dining room a meaningful moment of tzedakah, as the Lehigh Valley women connected with and supported the immigrant artisans in Israel through picking out and buying their beautiful gifts. In addition to their own purchases, each guest received a silver and pearl necklace as a favor and reminder of the work of Megemeria.