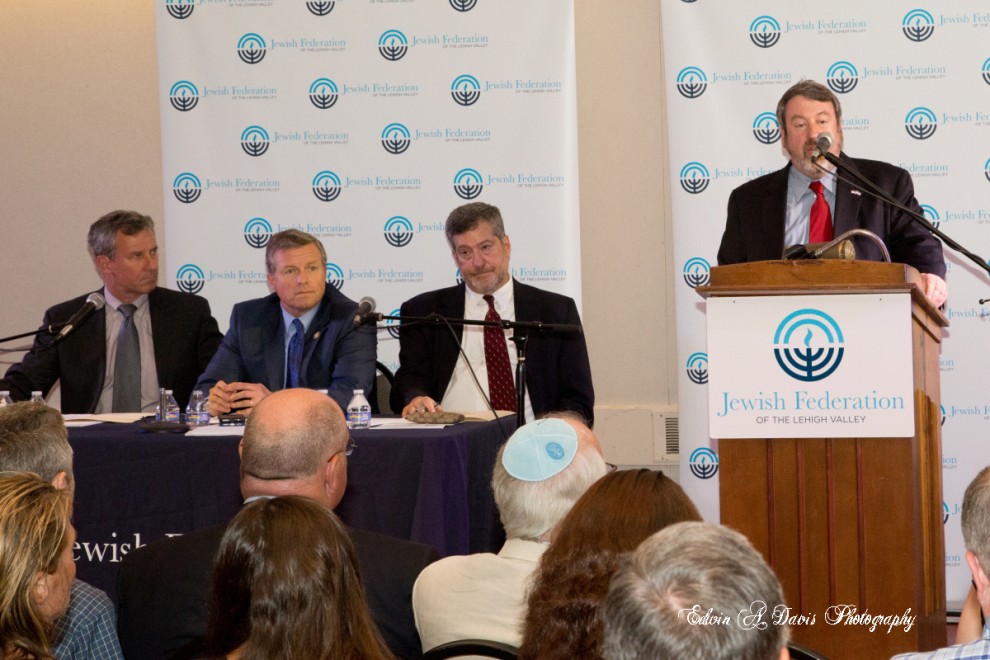 On Aug. 25, a crowd of over 300 people gathered at the Jewish Community Center to hear Rep. Charlie Dent (R-PA) and Rep. Matt Cartwright (D-PA) speak about the Iran nuclear agreement. The event, which was organized the by Federation’s Community Relations Council, aimed to educate the community about where their elected officials stand on this important issue, as well as give attendees the opportunity to ask questions and speak to their congressmen about their thoughts and concerns.

Moderator Martin Raffel, former senior vice president at the Jewish Council for Public Affairs (JCPA) and director of its Task Force on Israel, World Jewry and International Human Rights, began the evening by giving a brief summary of the deal and the positions of both its opponents and supporters. Then, each congressman spoke about his current position on the deal. Dent came out firmly in opposition to the deal. “The Middle East is on fire as we speak, and I am fearful that this agreement will take us in a direction where many of us would never want to go: a nuclearized Middle East,” Dent said.

Cartwright, on the other hand, was still undecided. Although he sympathized with Dent’s concerns, Cartwright said that the United States would gain valuable intelligence about Iran’s nuclear program if the deal were to be approved, and they would be forced to submit to the most rigorous inspections regime ever imposed on a state. Cartwright’s most pressing concern  was that Iran would cheat not dramatically, but incrementally so that the U.S. would be reluctant to dole out punishment for each infraction, but that overtime those smaller gains would allow Iran to push its nuclear weapons program further ahead.

Cartwright said in order to support the deal, he would need to have assurances from the Obama administration that this kind of incremental cheating would not be allowed to continue. “I’m looking for the administration to be clear and credible in defining what constitutes cheating and what will trigger a swift and harsh reaction from the United States,” Cartwright said.

Throughout the evening a panel comprised of Rabbi Michael Singer of Congregation Brith Sholom, Rabbi Moshe Re’em of Temple Beth El, Rabbi Daniel Stein of Bnai Abraham Synagogue and Rabbi David Wilensky of Congregation Sons of Israel reviewed questions submitted by audience members. They selected representative questions which Raffel presented to each of the congressmen.

After delivering their closing statements, the candidates stayed behind and spoke to attendees about their comments and concerns.

The evening demonstrated the intense level of interest in both the Jewish and non-Jewish community surrounding the Iran nuclear deal. “We are very pleased by the response to this program,” said Federation Director of Outreach and Community Relations Aaron Gorodzinsky. “To have such a large and diverse crowd was a testament to how important this issue is to the people in our community.”