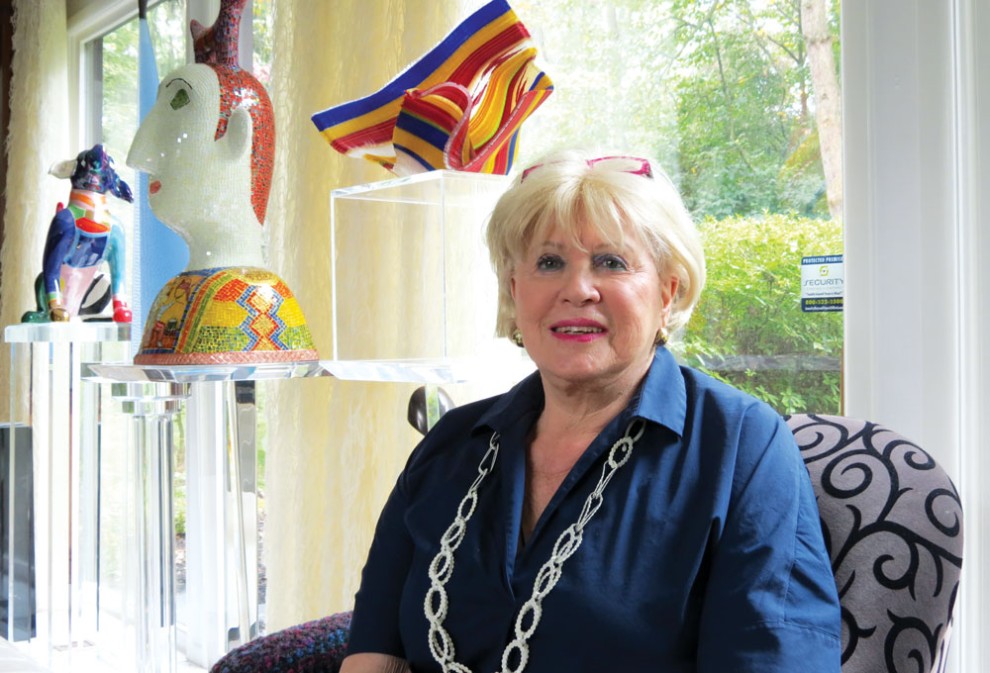 Elaine Lerner had been thinking about creating the Elaine and Leslie (Les) Lerner Israel Scholarship Fund for a long time. She knew that she wanted to start something that would encourage young people to stay involved in Jewish life, but she wanted to get it right. She finally decided on scholarships for trips to Israel because the three trips that she has made there have had such a big impact on the lives of her and her family. Established through the Lehigh Valley Jewish Foundation, her fund is now dedicated to aid individuals ages 27-40 because she feels that there is a gap in the opportunities for that age range and they may need the most help as they are setting out on their own and establishing young families.

As far as her own family goes, “I think that the older readers, the Allentownians, will know who I am,” she joked. "They knew the Lerner-Davis family. We’ve been here a long, long time.”

Sitting in her beautiful Allentown home full of bright colors and eclectic artwork, Lerner reflected on her family’s long history with the local Jewish community.

“The families were always very active in the JCC,” she said. “Going way back to when it was at 6th and Chew. We used to take the trolley. The trolley did go up Chew Street; that was one of the tracks we used to get off.”

She also reminisced about her days being actively involved as a leader of the Jewish Community Center’s Women’s Auxiliary.

“If you wanted to be involved in the community, the Women's Auxiliary was the place to be,” she remarked. “I had the privilege of being the president for a term.”

The joy of those days of putting on shows and starting up new initiatives like the still-successful Nearly New sale were no doubt also part of the inspiration for Lerner to create a fund which would nurture Jewishness in young adults.

“You got involved. It brought the community together and gave you a sense of something special you’re doing for the community,” said Lerner. “You look back on everything we did as youngsters and as teens and then as marrieds and with the Auxiliary and how important that was. The kids were very involved in the sports. You want these things to survive.”

Visiting Israel for the first time in the 1960s was also an education for Lerner and her children on the importance of continuing their legacy of being Jewish. She is proud to say that all four of her sons and all of her seven grandchildren but one (who will be going soon) have been to Israel.

“I know how exposure of our grandchildren to Israel made just a wonderful impression on them, and you hope that it's going to carry on to their households when they’re in the next phase of their lives. I’ve been thankful for what we have, and wanted to in some small way open the doors and expose people to what we felt was important to our family.”

That’s why she talked with Jim Mueth, director of planned giving and endowments, and Jeri Zimmerman, executive director of the Jewish Federation of the Lehigh Valley, about creating this new fund in her and husband Les’s (z”l) names.

“I know Les was very proud when I committed to the Lion of Judah, and I think when you make these kinds of decisions, you always have somebody very important in your mind. You think of what they would think and how they would feel, and Les is in my mind. I know it is something that he would commit to and he would be very proud of the ‘Lerners.’ It's not just me; it's the Lerners and part of our legacy in the community,” she said.

Ultimately, Lerner says she knows that everyone is different, but she would like people to have exposure to Israel due to these scholarships and hopefully it triggers a commitment in some big or small way to become or stay involved in local Jewish life.

“To keep your identity,” she emphasized. “I think it's going to make a difference in people, and that's what it's all about.”