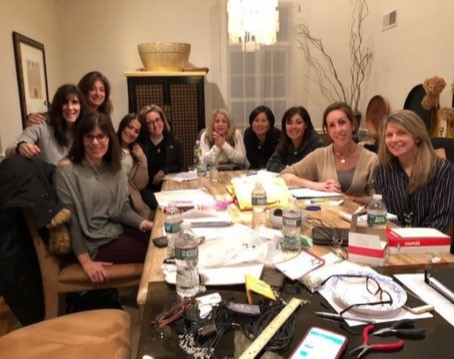 One week before the tragic shooting at a Pittsburgh synagogue, Debi Wiener was attending a funeral at a Jewish cemetery in Fountain Hill.

“We were just standing there, it was all quiet, and a car drove by … it had a couple guys in it, and they yelled ‘we hope you all die you stupid (expletive) Jews,’” Wiener said. “I had never encountered so closely to me such hatred.”

After a mass shooting at the Tree of Life Synagogue where 11 innocent people were killed the following Shabbat, Wiener knew it was time to do more than “rant:” it was time to take action.

She quickly began brainstorming with a group of like-minded women she knew well. The group had traveled to Israel together in 2017 with the Jewish Women’s Renaissance Project and the Jewish Federation of the Lehigh Valley.

“We wanted to do a little fundraiser,” said Lauren Rabin, another member of the group. “We thought, why don’t we raise some money for the shul and show that we stand with them and we support them.”

Rabin and Wiener both make jewelry, which brought the idea quickly to mind: why not sell 100 “Tree of Life” necklaces for $10 each, make $1,000, and send it to the synagogue.

They posted the fundraiser on Facebook. Within three days, they had 1,500 orders.

“In fact we found that most of the people who bought the necklace were not Jewish, and were so happy to support this initiative,” Rabin said. “I think people see it as a way to bring people together and just to show we all are here for each other.”

The group quickly jumped in to help. Rabin ordered the materials and she and Wiener would put them together. Ali Lipson created a card to go in each bag. Beth Kushnick was in charge of taking and shipping orders. Ilene Ringold and Stefanie Traub took orders and helped with packaging, along with Sara-Jane Bub. Amy Fels and Ellen Gordon worked on delivery. Kira Bub and Chelsea Karp wrote a press release for the media. Iris Epstein served as group treasurer. Wiener, Rabin and Kushnick started the “Branches of Love Initiative” Facebook group, which already has more than 600 likes.

“We felt like with this necklace, it became so much more than just raising money,” Wiener said. “It was the way it touched the people.”

They received orders from all across the world, including from the daughter and daughter-in-law of Rose Mallinger, the 97-year-old woman who was killed in the shooting. Rose’s daughter, Andrea, was also injured in the shooting, and ordered the necklaces to give to those who cared for her in the hospital.

The group received hundreds of letters from people thanking them, along with photos of themselves wearing the necklaces.

”We weren’t thanking people for buying the necklaces, people were thanking us for allowing them to buy it from us,” Wiener said.

In just about a month, they had officially “sold out” at 3,600 necklaces.

While the necklace sales may be over, the initiative is far from it, Wiener and Rabin said.

In January, the group is hoping to travel to Pittsburgh and attend a service at the Tree of Life Synagogue where they can present a check for the funds raised.

After that, they plan to use their platform to continue to fight hate and promote tolerance wherever possible, whether that means pushing for businesses that support Israel or lobbying for better Holocaust education in public schools with the help of group member Fay Kun, a second generation survivor who has worked closely with the Institute for Jewish-Christian Understanding’s Youth & Prejudice Workshops.

Rabin draws on the experiences of her grandparents, Holocaust survivors, as motivation. “They didn’t fight for their lives so we could just sit back and let our religion fade,” she said. “We have to fight just as they did to save ourselves and to save our children.”

“They fought for our freedom and now we have to fight for their legacy,” Wiener said.

While this tragedy hit particularly close to home, Wiener and Rabin are proud to know that their “little mom group” could really make a difference.