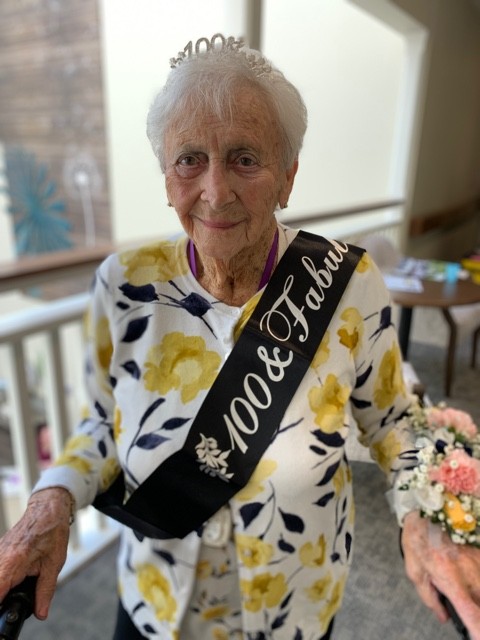 It’s not every day that a Holocaust survivor turns 100. It’s only rarer in the Lehigh Valley.

Ruth Saalfeld, a resident of the Heather Glen Senior Living in the Allentown area, celebrated her centennial birthday on September 9. The surprise party drew a crowd, including TV’s 69 News.

“I didn’t know this was all happening,” said the mother of Congregation Bnai Shalom member and retired Lehigh Valley realtor Anita Tish. “I’m a celebrity.”

The journey to 100 began in Stuttgart, Germany, where Saalfeld was born to Jewish parents and raised into her mid-teens. That was the 1930s, so she was there when Adolf Hitler came to power.

But she prefers not to talk about the Nazis and their reign. “Everybody already knows about the Holocaust,” she said.

That doesn’t mean she doesn’t talk at all about those years. In fact, her experience back then at St. Agnes Catholic School turned out to be her favorite conversation topic.

She bonded quickly with the nuns who taught there. “They treated me very well,” she explained. “They really liked me.”

The nuns kept her Jewish background secret and had her participate in regular activities like any other student. “Every morning, we had to go to church before school,” she said. “The kids didn’t even know I was Jewish.”

But the Nazis found out. Before she could graduate high school, they terminated her enrollment at St. Agnes.

The situation got much worse. On November 9, 1938, Kristallnacht (the Night of Broken Glass), Nazis who were destroying Jewish properties in Stuttgart beat her father, Herman Weil, and dragged him through the streets.

He fled to Paris in hopes of avoiding further Nazi persecution, and Ruth never saw him again. When the Nazis invaded France in 1940, they captured him. He died in a death camp.

Shortly after Herman fled Germany, Ruth and her mother, Henny Bernheim Weil (cousin of Albert Einstein’s mother, Pauline Bernheim), left for Holland and boarded the ocean liner Statendam destined for the United States. Family members in New York provided immigration affidavits that helped get them into the country.

Ruth went to work as a nanny for the Manischewitz family of kosher food and wine fame. Her mother worked in a nursing home and, later, in a Brooklyn sweater factory.

After World War II, Ruth met Herbert Saalfeld. Saalfeld had just returned from US Army service in Europe. Having landed in Normandy, he fought through France and into Germany, where his unit freed prisoners in Nazi camps. The rescue and effort to reunite camp survivors are detailed in “Memories of Evil: Recalling a World War II Childhood” by Peter Kubicek.

Outside work hours, Ruth was an avid ballroom dancer. From her teenage years into her 70s, she danced at Roseland Dance City near Radio City Music Hall.

Ruth and Herbert had two children, Harold and Anita. Harold is a retired US Navy podiatrist and attorney in Illinois. Anita settled in the Lehigh Valley and worked in real estate. She is a member of Congregation Bnai Shalom in Easton.

In 2009 Ruth, by then widowed, moved to the Lehigh Valley to be closer to Anita and her family. In March 2022, she moved to Heather Glen.

So how did Ruth make it to 100? Was it the dancing? Her regular workouts at the Jack LaLanne gym in New York? According to her: “Plain luck!”