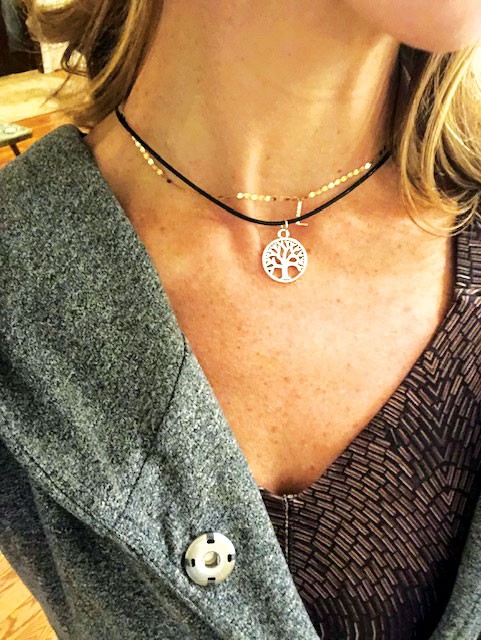 Only one week after the massacre in Pittsburgh at the Tree of Life Synagogue, a group of local moms sprang into action. The 18 women bonded through a 2017 trip to Israel in partnership with the Jewish Federation of the Lehigh Valley and the Jewish Women’s Renaissance Project. Since their return, they have focused on supporting the local community through tikkun olam, volunteering at the Jewish Day School, donating to the Jewish Family Service food pantry and spearheading programs for the Jewish community.

Now, they have formed the Branches of Love initiative, turning their focus to increasing awareness and combating anti-Semitism and ignorance through education and outreach.

“We have come together with a brand new initiative,” said Beth Kushnick at a recent Federation event.

The first step in this new project was the design of a symbolic necklace depicting a silver tree of life on a black leather cord by Lauren Rabin and Debi Wiener. The group is selling them for $10 each, with 100 percent of the proceeds being donated to the Tree of Life Synagogue for the support of the victims and rebuilding their synagogue.

After only 48 hours on social media, they had already sold over 600 necklaces.

“It’s viral. It’s unbelievable the amount of response that we have gotten around the country,” Kushnick said.

“Especially from the people in Pittsburgh,” added Rabin. “We had a lot of people write us that they’re so thankful that we’re carrying this on, that it’s not forgotten, that the week hasn’t gone by and people are over what happened. They want to continue. They just want people to feel what they’re feeling all over the country and know that we’re standing with them… beside them. It’s very touching for us and everybody around the country who wants to get involved.”

“Of course we never imagined that we would have this amount of interest in these necklaces,” Kushnick said. “We heard yesterday from the best friend of [Rose Mallinger z”l] who died [in the tragedy]. Her daughter is going to get a necklace.”

In addition to the enthusiastic response from Pittsburgh, orders have already gone out to over 26 states across the country, and the group hopes that this special piece will be a symbol of hope and unity wherever it’s worn.

To purchase a necklace and make a donation to the Tree of Life Synagogue, please contact Beth Kushnick at bethkush34@yahoo.com.