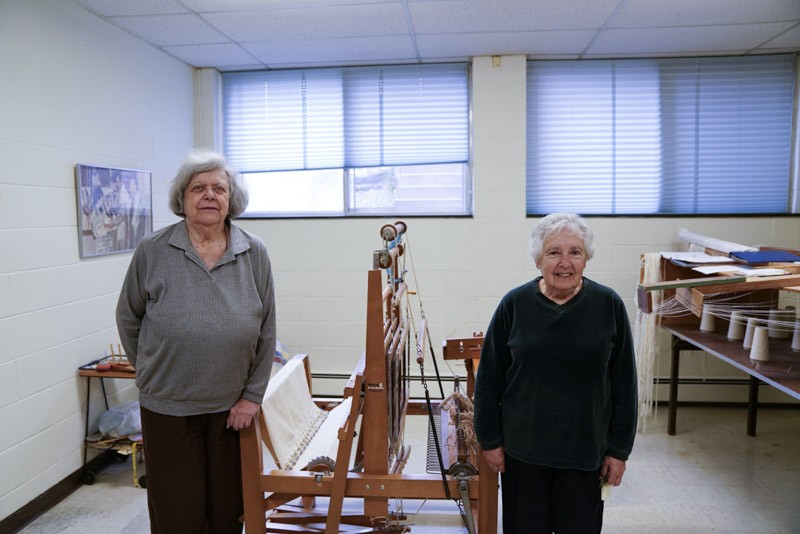 By Jeannie Miller
Special to HAKOL

Saturday, Dec. 30, was a celebratory Shabbat for Congregation Sons of Israel (SOI) in Allentown, because after the services, the synagogue held a kiddush in honor of the “Loom Ladies,” Helen Besen and Elaine Atlas. These two women have consistently headed a project that began in 1974, and provides a way for people to weave their own talleisim, or prayer shawls. Over 800 talleisim have been woven at SOI, under their guidance and the guidance of their committee.

The history of this project is interesting. It began after there was a flood in Wilkes-Barre in 1972, and Irene Milkman’s sister-in-law told the SOI women that their Jewish Community Center had woven talleisim (prayer shawls) on a loom, and so precious were they that their talleisim were the first items they thought of saving as the waters rose.

In the early 1970s, the SOI Sisterhood worked very hard to raise the $1,000 needed to buy the loom. Jeanette Eichenwald was Sisterhood president then, and she remembers that Tootie (Reba) Levine raised a lot of money for this project by wearing watches all the way up both arms and selling them to everyone she met. The Sisterhood had to raise even more money for the wool, the bobbins and other loom accessories.

Once the loom arrived, it sat in the basement for weeks until Eduardo Eichenwald and other men from the Men’s Club, and Emerson Sell, the janitor, took on the task of assembling it. The “Loom Ladies” had to figure out how to thread the loom, and Mel Besen constructed a contraption, called a grill, which is still in the back of the Loom Room for that purpose.

Seven women from SOI had gone to Wilkes-Barre for a week to learn how to weave on a loom, and they were taught by Ruth Hefner. The women who learned were: Adina Poresky (chair of the project), Diane Fisher, Phyllis Ringel, Rae Kurland, Mae Kuba, Besen and Atlas. As of today, only Atlas and Besen still work supervising the tallis weaving. Lisa Shedroff had also been helping.

On Dec. 30, SOI awarded Atlas and Besen the first lifetime memberships to the synagogue as the congregation is well aware of the tremendous amount of time and effort that these two women have dedicated to the shul. At least one of the two ladies has to be present when anyone is weaving a tallis, which takes around 10 hours. Atlas sets up all the appointments for weaving, and she and Besen teach people how to weave, help them pick a pattern, check for mistakes, fix broken threads, set the loom up after each tallis is finished, and twice a year they re-thread the entire loom.

Over these 44 years, this has indeed been a wonderful fundraiser for the shul. The Jewish Day School and Temple Beth El have sent classes of children to SOI to experience weaving a tallis and learn the significance of the tzitzit. People come from all over the Lehigh Valley and out of town to weave, and right now there is a year’s waiting list of people who want to make his or her own tallis.

Atlas and Besen take special satisfaction in helping each person complete his or her tallis, whether it is for a bar or bat mitzvah, a wedding or just a special gift.  Barbara Sussman, for example, has woven 51 talleisim for family and friends.

During the last week of December, Atlas’s grandson Ben came to Allentown to weave a tallis for his upcoming bar mitzvah, and his whole family took turns on the loom. His tallis is the 872nd tallis that has been woven at Sons of Israel, and weaving it with his family was extra special because it coincided with his grandmother being honored for her exceptional service to the Jewish community.