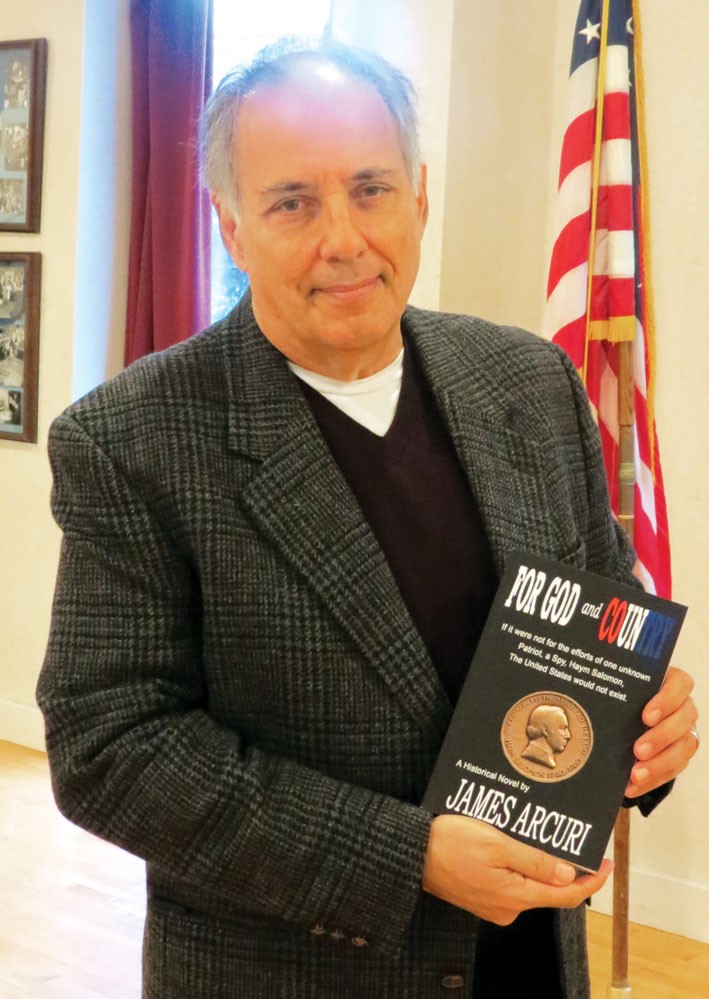 Maybe you’ve never heard the name Haym Salomon, but you know his friends. Alexander Hamilton. John Adams. George Washington. The name of Salomon—known as the “financier of the American Revolution”—belongs among these revered heroes, but when author and filmmaker James Arcuri was a youth in the 1970s, he couldn’t find any resources about him. Finally, in the New York Public Library, he discovered one book. He wanted to copy it, but just starting out working odd jobs in the film industry, he couldn’t afford it. So, little by little, he eventually copied each page, bundling them into a manuscript he still treasures today.

Why did he go to such lengths to read a book about an 18th century financial broker? “Salomon is my #1,” he told the crowd at the Jewish Federation’s Women’s Philanthrophy Lunch & Learn on Nov. 9. “He means so much to us as Jews, to the United States, and to the world.” That is why Arcuri has now not only written his own book and graphic novel, “For God and Country,” but is working on an upcoming documentary miniseries. Attendees at the Lunch & Learn got a sneak peek of the documentary after Arcuri’s talk.

Arcuri has written over 70 screenplays and stories, but Salomon is his passion project. And it’s easy to see why when you learn more about Salomon, whom Arcuri described as “quite a character.” Born in 1740 and starting out life in a Jewish ghetto in Poland, Salomon always had a rebellious nature. After learning both how to trade and six additional languages, he soon found himself in high demand as a broker. After gaining such a good reputation throughout Europe that he was offered a job back in Warsaw by the Rothschilds, his political activities got him in trouble and he fled to England. There, he was beaten and robbed and left with just enough for a one-way ticket to New York. Once there, he met and married the daughter of a society family, but he was not content to fade into domesticity.

Joining the Sons of Liberty, he solidified his fate as one of the key players without whom the American Revolution would not have succeeded. Escaping prison, spying on the British, encouraging Hessians to desert, and pouring his own fortune into the cause while handling those of other better-known names are all part of his astounding legacy.

Laid to rest in the Mikveh Israel Cemetery in Philadelphia (he was the largest individual contributor to the construction of the main building of that congregation) at the age of only 44, Salomon has gone mostly forgotten by history. After hearing the incredible story of this Jewish-American genius, the audience of the Lunch & Learn questioned why he is not included in the curriculum at more schools, something which Arcuri hopes to rectifiy. “I want him to win, and to win big,” he said of his hero. With the release of the miniseries next year, perhaps Salomon will finally get his due.