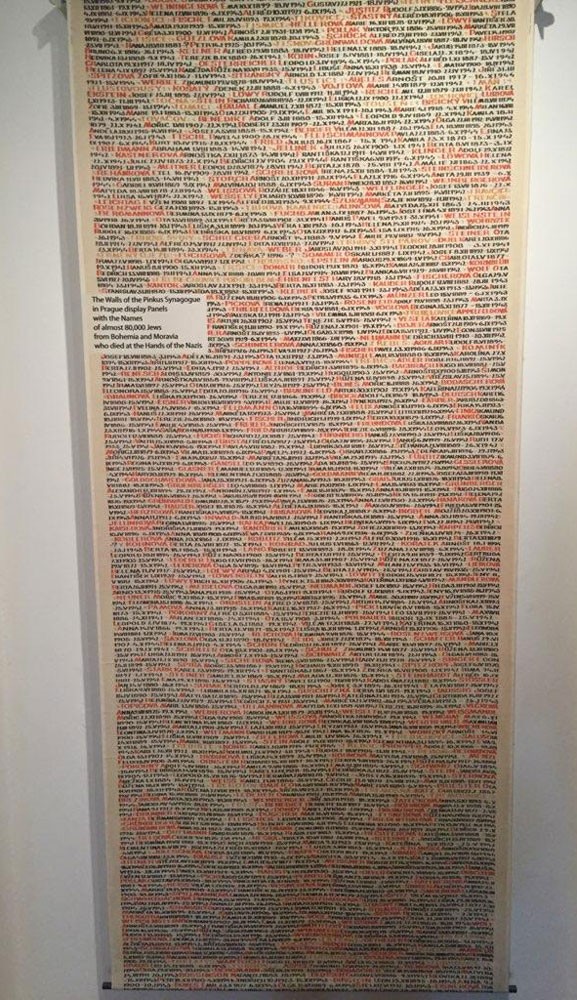 By Barry Halper
Special to HAKOL

In late October, Carol and I went to London to see the Philadelphia Eagles play the Jacksonville Jaguars in an NFL game at Wembley Stadium. Of course, we visited some of the notable tourist sites of the city. However, the highlight of our sightseeing was visiting the Czech Memorial Torah Scrolls Museum located within Westminster Synagogue. This museum and its board are the trustees of the 1,564 Torah Scrolls that were saved from destruction when the Nazis occupied Czechoslovakia from March 1939 through the end of World War II.

When Carol and I entered the museum, we were graciously met by Miles Laddie, the treasurer of the Memorials Scrolls Trust, and he began to explain the incredible story of the Czech Memorial Scrolls.  Jews had lived in Bohemia and Moravia (provinces within Czechoslovakia) for more than a thousand years. During that time, a rich Jewish culture developed, centered in Prague and spread across a large number of communities throughout the two provinces.

Miles explained that unlike the Jewish population in Poland and Russia, the Jews of Bohemia and Moravia were integrated into the general population. They participated at all levels, i.e. professionals, store owners, tradesmen.

Starting in September 1939, the Nazis slowly and systematically began to take away the rights of the Jews in Prague and the rest of the two provinces. Deportations began in early 1942. At that time, it was clear to the leaders of the Jewish community in Prague that total destruction of the Jewish population was imminent.

The Jewish leaders reached out to all the communities and requested they send all of their Judaica items to the relative safety of the Jewish Museum in Prague. Some 1,800 Torah scrolls were collected.  Each was meticulously catalogued by the museum staff with a description of the scroll and its place of origin. Over 100,000 items, including sefarim, and even instruments for brit milah, were sent to the Jewish Museum. The Nazis allowed the collection and cataloguing since they were planning on creating a Museum for Extinct Peoples.

After the war ended, approximately 10,000 Jewish survivors returned to Prague and the provinces, and more than 200 Torahs were returned to these communities. The remaining 1,564 Torahs were kept in the Jewish Museum in Prague until 1964, when philanthropists in London purchased the Torahs from the Communist Czech government, brought the Torahs to Westminster Synagogue and created the Czech Memorial Scrolls Trust. The goal of the trust is to loan these scrolls out to synagogues all over the world, and if they are kosher, to be used for special occasions, primarily bar and bat mitzvah, as a rededication of these sacred scrolls.

In 1971, Congregation Sons of Israel in Allentown received Czech Memorial Scroll No. 75. The scroll came from the town of Lipnik and was written in 1900. The Torah is on permanent loan from the Memorial Scrolls Trust.
Currently, Sons of Israel is working on creating a permanent display of the Torah as well as another Torah from pre-World War II Czechoslovakia provided by Roberto Fischmann. The display will also include text panels and stories regarding the Torahs and the towns they came from, as well as other Judaica items specific to pre-WWII Europe.

On Feb. 7, Jeffrey Ohrenstein, chairman of the Memorial Scrolls Trust, will visit Allentown. He will present at a Lunch & Learn talking about five of their rescued Torahs and how they came to now be in the Lehigh Valley, including the one at Sons of Israel as well as scrolls at Congregation Brith Sholom, Congregation Keneseth Isarel, Temple Beth El and the Jewish Day School. The program is sponsored by the Community Relations Council of the Jewish Federation of the Lehigh Valley and is open to all.

To register for the Lunch & Learn with Jeffrey Ohrenstein on Thursday, Feb. 7, call the Jewish Federation at 610-821-5500, e-mail mailbox@jflv.org or CLICK HERE. $12 for lunch and program.