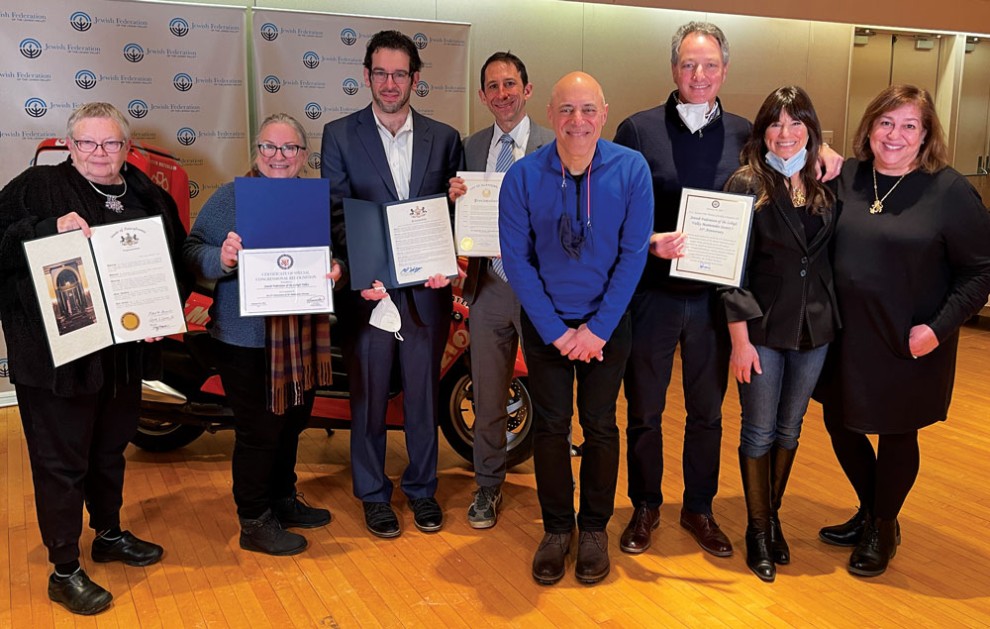 This January, the Maimonides Society celebrated their 35th year in the Lehigh Valley.

As is normal during COVID, the fully in-person event that had been planned became a hybrid event, which consisted of both in-person and Zoom components, thanks to Brad Finberg of Micro-Innovation, LLC, and Federation Marketing & Engagement Associate Bayley Carl for their tech support. The Zoom portion that was part of an earlier plan included talking with Eli Beer, founder of United Hatzalah of Israel and President of the U.S.-based organization Friends of United Hatzalah, broadcasting from Israel. He was speaking with Dr. Bill Markson, Maimonides Society president, who was seated in the Kline auditorium of the Jewish Community Center of the Lehigh Valley. Alongside Markson was Jewish Federation of the Lehigh Valley staff, including Director of Campaign and Security Planning Aaron Gorodzinsky and Executive Director Jeri Zimmerman. Also in attendance in person were Congresswoman Susan Wild, Ellen Kern, Chief of Staff for Senator Pat Browne, Representative Michael Schlossberg, and Allentown Mayor Matt Tuerk, all of whom presented the Maimonides Society with a variety of proclamations. Federation Presdient Gary Fromer and Women’s Philanthropy Board Member Dr. Carol Bub Fromer were present to greet them.

One of the highlights of the event was that the audience on Zoom got to see the Jewish Federation’s ambucycle, which was on display at the JCC, and got to hear from some of the Maimonides founders in a video. This group of founders started with a simple desire to help Jews here and abroad — a goal they have achieved over the past three and a half decades.

After hearing from the in-person presenters, it came time for Markson’s interview with Beer. Beer shared some harrowing tales that included stories of his time serving as an EMT in Israel.

A theme of the event was the focus on the future of the Maimonides Society. Markson complimented the way the Maimonides Society has functioned during COVID and used Zoom to its full potential by providing the community with informative classes and keeping everyone as up-to-date as possible over the course of the pandemic.

“We had a speaker who discussed the history of vaccines. I think those who attended really enjoyed it, and I want to have more programs like that,” Markson recalled. Former Maimonides President Dr. Karen Dacey shared that she hopes that younger Jewish doctors continue to become involved as they move here.

The event also included many moments of remembering Dr. Mickey Ufberg, z”l. One of the founders of the Maimonides Society, his memory is a blessing that lives on through it today.