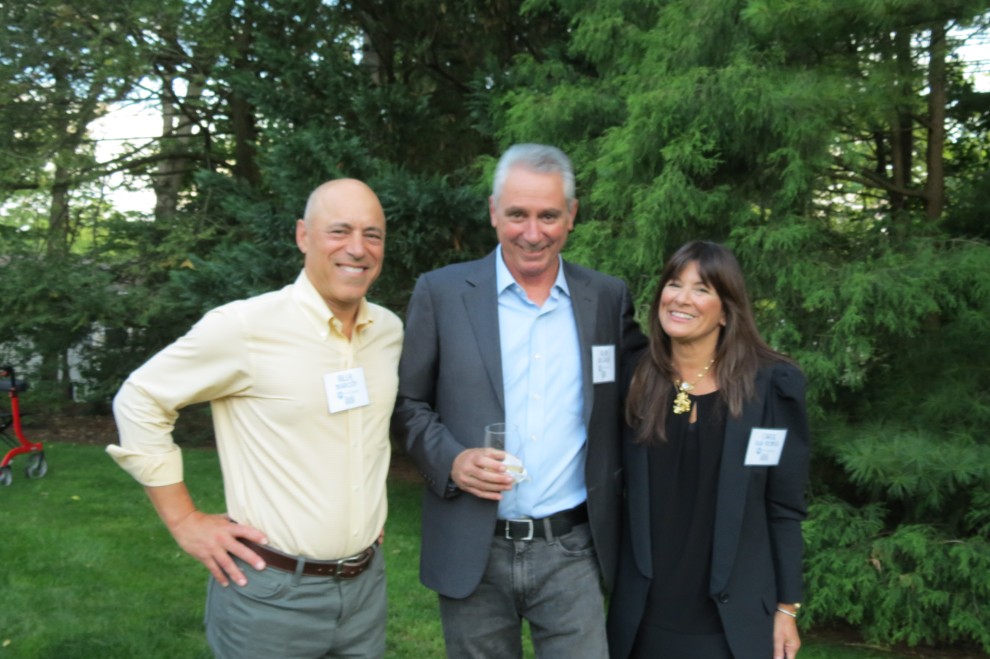 The location of the Jewish Federation of the Lehigh Valley’s major donor reception was familiar to most of those in attendance on the evening of September 21.

Participants gathered in this lushly green backyard in Westwood Heights for the start of the Federation’s Annual Campaign for Jewish Needs. They enjoyed a warm, convivial reunion under sprawling tents lit by strings of glowing lights, as Vicki Wax, cochair of this year’s campaign, took to the podium to kick-off the event.

“I’ve been coming here for 50 years,” she told them. “But it never looked like this before when I visited my dear friends, the Ufbergs. It brings back so many great memories of our families spending time together. It is just so wonderful to be here with you, in person, to celebrate a new campaign year.”

Her cochair, Bill Markson, took the microphone to introduce the guest speaker for the event, Alon Ben-David, an Israeli TV, radio and print reporter who’s covered politics, wars and other national and international news for three decades. “He’s considered one of the leading journalists in Israel,” Markson said.

Ben-David jumped right into it. “As usual,” he began, “we are under the Chinese curse of living in interesting times in Israel.” He went on to detail the shifting security challenges facing Israel today — ultimately highlighting the importance of organizations like the Federation raising funds to help the cause.

In the middle of what happened to be the same week that Iranians took to the streets to protest the morality police beating a woman to death for not properly wearing a hijab, and that police shot and killed protesters, he said that “Iran is really the source of most terrorism in the region.”

Ben-David went on to provide reasonsfor optimism in the region. Iran, after all, has not been able to fulfill its nuclear goals. “The fact that Iran has not attained nuclear weapons capabilities is a testament to our efforts,” he said.

He talked about the promising possibilities of the changing nature of relations among Israel and its neighbors. “In the new Middle East, everyone is a frenemy,” he said. “Everybody is working with everybody.” Parties don’t need to agree on much to be able to find the occasional issue for a mutually beneficial partnership.

Israel and Lebanon, for example, are close to reaching their first agreement in 73 years, he said. It would define the maritime border between the two countries, giving each side certainty regarding its natural gas supplies. “This is at least as significant as the Abraham Accords,” he said of the 2020 agreements under which the United Arab Emirates and Bahrain recognized Israel as a nation and opened diplomatic relations.

As a sign of growing hope for better days ahead, he noted the name of one Gaza protest movement, which translates as We Want to Live. Life, a desirable life, may be the best hope for progress. Pointing to his cell phone, Ben-David noted: “This machine is flattening the ambitions of humanity.” People can instantly see pictures of beautiful tropical beaches, seared steaks on nice plates… “Everyone everywhere wants those sorts of things.”

Nearing his conclusion, he addressed the coming election in Israel, the fifth in four years. “I’m not sure this one is going to be decisive,” he said. “These elections, like here (in the United States), are mostly about personalities, and I don’t think they’ll affect the region.”

Ben-David’s talk ended with a call for strong support for Israel and its defense. Israelis today can avoid military service if they want to, he pointed out, so “Israel needs to be worth fighting for. No one (else) is going to fight for us.”

Next came an opportunity for attendees to take to the podium to speak about the importance of the annual campaign, or just to describe why they contribute. Vicki Wax led the way: “If we’re going to ask people to pledge, we need to lead by example and make our own gift first.”

A line of others followed — immediate past Federation president Gary Fromer, Harold Goldfarb, current president Robby Wax. Fromer talked about how the Federation provides funds to a number of agencies, including the local Jewish Family Service, Jewish Day School and the Jewish Community Center. He stressed the importance of encouraging the younger generation to get involved and to help strengthen our Jewish community. He spoke about being inspired by his in-laws to want to take care of the Jewish community in the Lehigh Valley.

Robby Wax wrapped up the night with a call to action for the year ahead. “It starts here with this group on a night like tonight.” And it builds from there…

To make your gift to the 2023 Annual Campaign for Jewish Needs, please contact Aaron Gorodzinsky, aaron@jflv.org, or 610-821-5500, ext. 337, or visit our website at www.jewishlehighvalley.org.