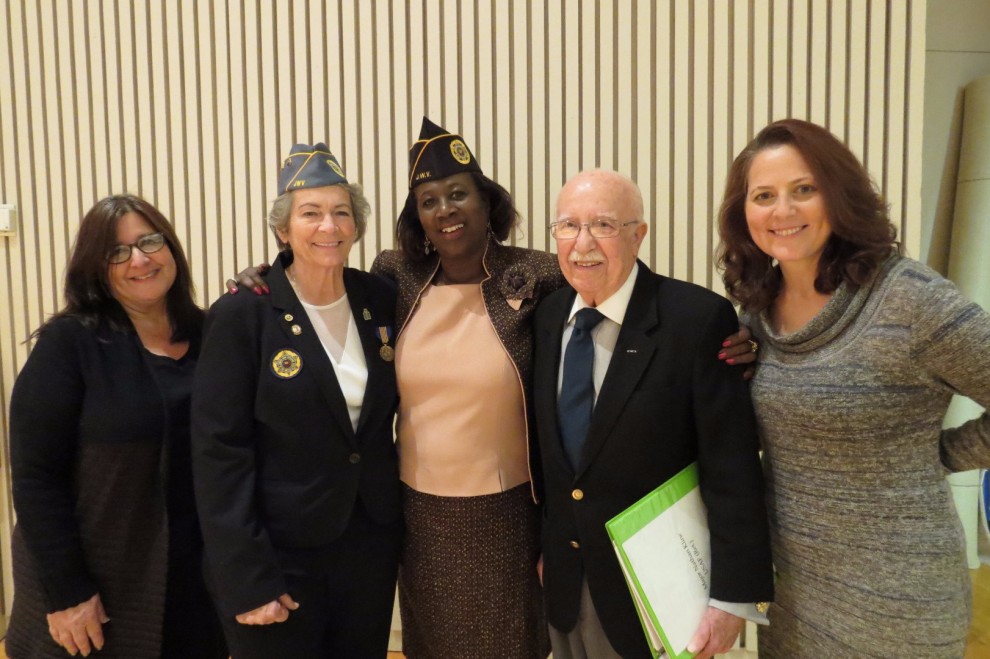 Major Nathan Kline is no stranger to pressure.

The 89-year old World War II veteran and Allentown native was present for the invasion of Normandy on D-Day and witnessed the Battle of the Bulge from thousands of feet in the air. He joined the Air Force despite his 20/40 vision, stepping up when his country needed him.

Kline once again stepped up to the plate on Oct. 18, when the morning’s speaker Harry Ettlinger suddenly fell ill and was unable to address the crowd of 300 people who had gathered to hear him speak about his time with the Monuments Men, the elite army unit tasked with locating and returning art stolen by the Nazis. In Ettlinger’s absence, Kline volunteered to speak to the packed auditorium at the JCC about his own wartime service.

Kline joined the armed forces at 18 even though the age of enlistment at the time was 21. He wanted to join the air force, but his poor vision disqualified him from joining. Undeterred, Kline memorized the eye chart and became a bombardier-navigator.

Kline’s most harrowing time in the Army came during the Battle of the Bulge, when he was shot down twice in one week. The first time, the B-26 carrying Kline and his crewmates was struck by a German anti-aircraft shell. Miraculously, the shell failed to explode and the pilot managed to land safely in England. Later that week, Kline was struck again in a B-26, which crash landed in a rocky field. When asked if he was scared by a young audience member, Kline said he didn’t have a change to get scared. “I was too busy trying to accomplish my job,” he said.
Although Kline was physically unscathed by his ordeal, he was sent to a rest home in a Scottish Castle for a break.

He spoke candidly about his diagnosis of post-traumatic stress disorder, and stressed the need to support veterans who come home from war. Kline himself has worked to help other veterans in the Lehigh Valley who suffer from PTSD since his retirement from the Air Force in 1984. “We are able to assemble here today because of what they did and are doing over there today,” he said.

The event was sponsored by the Jewish Federation of the Lehigh Valley, the JCC, and the Jewish War Veterans.