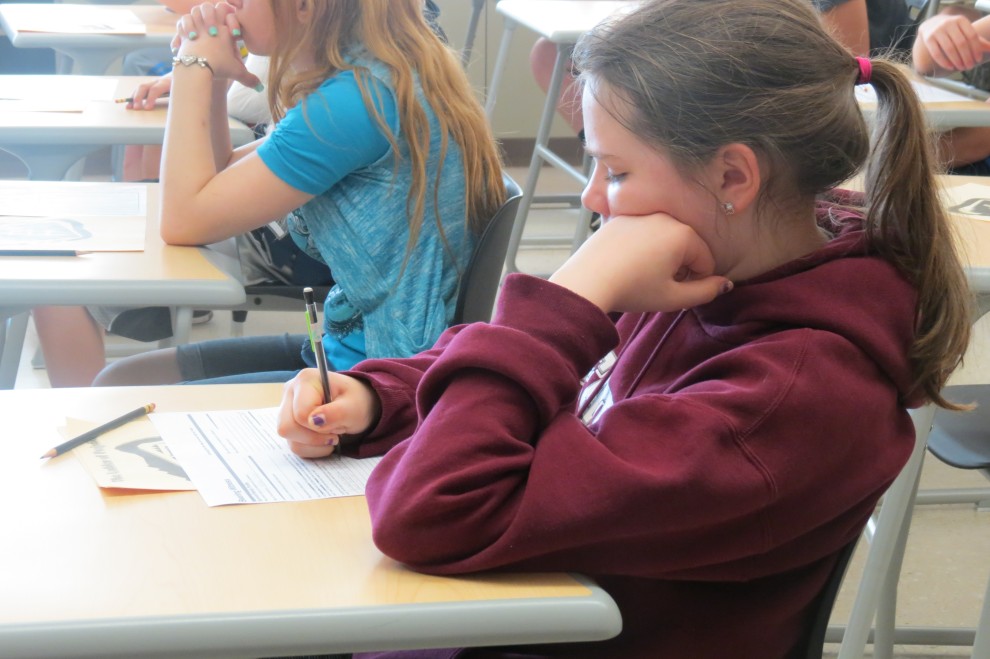 NORTHAMPTON – More than 400 8th graders at Northampton Area Middle School participated in a day-long workshop on May 27 to learn more about the Holocaust and how those lessons translate into their own lives.

The “Learn, Listen and Lead” event was the brainchild of English teacher Kristin Weller, who was inspired by the Youth and Prejudice workshop at Muhlenberg College.

“Two years ago I began the process of trying to create a conference for them … where we would welcome Holocaust survivors, a theatre group and various teacher presenters to come in and explain to the students the value and the importance of studying our history, learning more specifically about the Holocaust and World War II,” Weller said.

In the morning, students watched a performance of “The Diary of Anne Frank,” presented by the Holocaust Awareness and Education Museum in Philadelphia. From there, they broke up into classrooms and in each room, heard from a presenter brought in by the Holocaust Resource Center of the Jewish Federation of the Lehigh Valley. Some of the presenters were Holocaust survivors themselves and others were children or grandchildren of survivors or liberators.

The speakers told of their own family histories or war experiences and answered questions from the students.

“Some of the most powerful moments that we have are when we bring a survivor or a liberator or a combination of a survivor and a liberator into the school and talk to the students,” said Shari Spark, coordinator of the Holocaust Resource Center. “That actual experience, that actual exchange with someone who was there, speaks volumes to these students.”

The students took notes during the presentations in a “Passport to Peace,” which posed questions like “Who are the perpetrators?,” “Did anyone collaborate against the victim?” and “Were there any bystanders who could have intervened on the victim’s behalf, but didn’t?”

After lunch, teachers presented several hate reduction-inspired lesson plans including a collaborative art project and a discussion on prejudice and how it escalates when left unchecked.

The students had already had a chance to view the Holocaust Resource Center’s Legacy Exhibit, which teaches about the chronological history of the Holocaust but also its relationship to our local history.

The school had run a writing contest for the first time called the “Suitcase Stories Contest.” The teachers asked students to look at unclaimed artifacts provided by the Holocaust Resource Center and come up with a fictional story or poem to accompany them. The contest winners were announced at the day’s closing assembly.

“The students have been very receptive, they’ve learned a lot and they had a chance to make connections with other people from different situations. I think it’s very beneficial for our students and a great opportunity for them,” said Dave Lafferty, assistant principal at the school.

“A program like this really does try to reduce the amount of prejudice and bullying and so forth that goes on,” he added. “We have a number of programs here already incorporated into our school program, but this is just an added bonus to help kids make a connection that, yes, we can make a difference, and together we can accomplish many goals.”