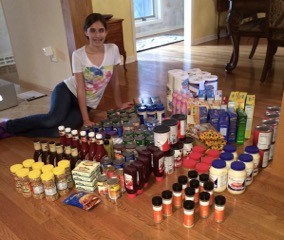 Editor’s note: Each month in HAKOL, we feature the mitzvah projects of community members as part of our Give a Mitzvah, Do a Mitzvah column. We hear from their families about their plans and what they are doing to be of service to the community. This month, we checked in with a few of the people we featured this past year to find out how their mitzvah projects progressed.

Rafi Ettinger-Finley loves music. He started playing violin at the age of four with the Valley Suzuki Strings and now also plays in the Springhouse Middle School 7th/8th grade Orchestra and Honors Orchestra, as well as competing in fiddling, Celtic and classical music settings. Because music has been such a big part of his life, Rafi chose to support El Sistema Lehigh Valley as his mitzvah project. El Sistema provides free string instruments and lessons to disadvantaged children in Allentown. Rafi raised money by playing his violin and requesting donations using a sign placed in his case.

Rafi played his violin at locations across the Lehigh Valley, from Temple Beth El to the Allentown Farmer’s Market. Rafi’s parents were pleased by the response to their son’s project. “People were really impressed that he was a kid and he was the one initiating it,” said Audrey Ettinger, Rafi’s mother. “Even the vendors at the Allentown Farmers Market were giving to his mitzvah project. People were extremely generous.”

The support for Rafi’s project continued both during and after Rafi’s bar mitzvah. “Rafi was really touched by how many guests at his bar mitzvah gave donations. I know it was a pleasant surprise for El Sistema, and I think they were moved by the littler donations,” Ettinger said. In fact, El Sistema was so impressed by Rafi’s generosity that they invited him to attend the Allentown Symphony’s opening concert as their guest. Rafi went on stage and handed Emanuel Ax and conductor Diane Wittry some flowers, and he was invited to the reception after the concert.

As for what advice she would give other parents, Ettinger had one big one: start early. “I think we all underestimated how totally absorbing the process would be,” she said. She also advised others to continue their projects. “It doesn’t have to end with the bar mitzvah,” she said. “You can continue to make a difference.”

For her bat mitzvah, Madeleine Rosenthal learned the book of Ruth, and reflective of her learning, she chose to raise awareness and money for the Ethiopian National Project (ENP) in Israel. The ENP is an organization that works to advance the integration of Ethiopian-Israelis into Israeli society. The foremost strategy is improving scholastic assistance and social outreach to young Ethiopian-Israelis. Currently, ENP is reaching over 4,300 Ethiopian Israeli youth and has built 19 youth centers.

At first, Madeleine had difficulty finding a mitzvah project that she truly connected to. But when she learned about the ENP, she instantly knew that she had found the cause she wanted to support. She says that it appealed to her because "the book of Ruth is about acceptance. If you accept someone as they are, something good can come of it. When Ruth was accepted, the Jewish people got King David.”

She was fortunate to be able to meet privately with David Mashasha, an Ethiopian-Israeli medical student who has benefited from the program, and to learn more about it from him first-hand.

Madeleine and her family were touched by the response her mitzvah project garnered. “She had a great response,” said Nicole Rosenthal, Madeleine’s mother. “It truly was heartwarming.” But for Madeleine’s parents, the best part of the bat mitzvah was listening to their daughter explain the connection she had found between her reading and her mitzvah project. “Listening to her speak was really a treat,” Rosenthal said. “Hearing her convey what she had learned was the most special part of the evening.”

In choosing a mitzvah project, Rosenthal advised that families give themselves plenty of time to decide. “Have real discussions about what speaks to them,” she said. “Find something that is meaningful for them in their lives of what they would like to work for and what they would like to see in this world. Working on something she cared about really made the whole experience.”

Eliza Wiener chose to highlight the work of No Kid Hungry for her mitzvah project. The No Kid Hungry campaign connects kids in need with nutritious food and teaches their families how to cook healthy, affordable meals. The campaign also engages the public to make ending child hunger a national priority.

Eliza sold 100 bookmarks she handmade herself and gave the money to the No Kid Hungry campaign. Through her efforts, she raised enough money for 15,000 meals. In order to highlight the problem of child hunger at her bat mitzvah party, she featured baskets filled with food that was later donated to the Community Food Pantry at Jewish Family Service. Eliza shopped for the food herself. “Seeing the baskets on the table she felt special about it,” said her mother Lynn Wiener.

Wiener was proud of the way her daughter connected to her mitzvah project. Her biggest advice to other parents about to go through the process was to help the child find something they really care about. “Try to help them find something they can do with their own skills that they can enjoy accomplishing,” she said. “It can be an educational program, giving of your time, or even creating something for someone else to put a smile on their face.”

For help developing your mitzvah project, contact Abby Trachtman, program coordinator, at abbyt@jflv.org or call her at the Federation office at 610-821-5500.