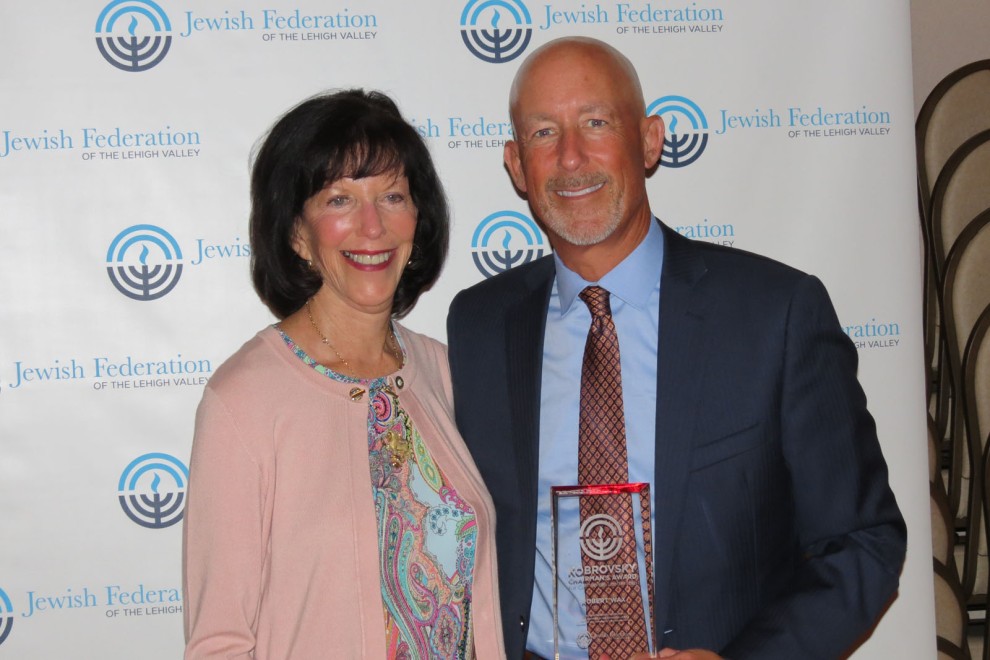 Leading up to the Jewish Federation of the Lehigh Valley Community Celebration and Annual Meeting on June 9, 2022, I spent considerable time pondering the start of my presidency of the Federation. Over the past few years, immediate past president Gary Fromer and I have had a number of conversations about our community, the state of Israel, and the efforts of the Federation to support both. Gary has been a mentor to me for years, and it’s clear that as president, he performed as expected — with tremendous skill and vision. When he asked me to consider being his successor, I felt some trepidation, since he set the bar pretty high.

Once the evening began, though, I was captivated by the commitment and passion of the award recipients. They are such an impressive group of caring and dedicated leaders. I thought about the tour of the Jewish community that my wife and I provided to Dr. Doron and Lauren Rabin 12 years ago, and I was so proud to watch Lauren receive the George Feldman Achievement Award for Young Leadership. I enjoyed listening to Shari Spark present Debbie Zoller with the Mark L. Goldstein Award for Outstanding Jewish Professionals and next invite up Michele Willner Levy, Ed Posner, Marcel Guindine and Eva Derby for the Mortimer S. Schiff Award for Prejudice Reduction. Another highlight was the announcement of nearly $10.5 million pledged to the Life and Legacy Campaign, with those who led the effort holding up signs with the actual amount raised to date. As I was called to the podium to give some closing remarks, the apprehension I previously felt was replaced by the enthusiasm and excitement created by these tremendous community leaders.

As the new year arrives and we begin the next chapter of the Federation, I need to start by thanking some people who have made it possible for me to take the position of president. My wife, Laurie, realizes that these types of commitments take me away from spending time at home, but she supports me in all my endeavors. I was proud to have my older son, Ben, in the crowd, too. I even announced his Federation presidency, which begins in 2047!

Our family’s connection to the Federation began in the late 1960s with my mom, who continues to be an ardent supporter of our organization, most recently serving as my cochair for our 2022 Annual Campaign for Jewish Needs. Is there anyone who has a better time soliciting money than my mom? Can anyone say no to her? Our joint receipt of the Kobrovsky Award for Campaign Leadership is certainly a proud family moment, and we are deserving of the award solely because of her efforts.

As I was contemplating my remarks for the evening a few weeks prior, my mom handed me my father’s speech from his installment as Federation president in 1996. I found great nuggets of wisdom, as well as some wonderful comments to provide historical perspective.

In his speech, my father spoke of the teamwork required for the Federation to be successful. He thanked his dear friend, Dr. Michael “Mickey” Ufberg (z”l), who preceded him as president and guided the Federation masterfully. My father next thanked a number of other local legends, including Mort Levy (z”l), Lenny Abrams, Danny Cohen, and Wendy Born, as well as a young, up-and-coming leader, Roberto Fischmann. Jeanette Eichenwald was recognized for starting what became Yachad University (which was really meaningful, given her recent decision to retire from teaching classes). My father mentioned another all-time Federation great, Taffi Ney, for her efforts and countless contributions. There was also a reference to the Ort Flowering Fantasy Ball of 1968 held at the Jewish Community Center, which drew my father into the Allentown Jewish community.

So, what do I expect from my presidency? First, I ask for the same type of support from seasoned leaders and new ones alike. As we say at St. Luke’s University Health Network, success typically requires a team, and I know I can count on members of our community to assist as we begin this next journey together. Second, we need to continue to support the JCC, the Jewish Day School, and Jewish Family Service. These agencies are essential to new families considering whether to make the Lehigh Valley their home, and they are the cornerstones of our community. Third, I am fortunate to have a talented and experienced executive committee and board, and I cannot wait to work closely with them to continue the Federation’s mission. Fourth, and most importantly, I am so blessed to have an amazing Federation team, led by Jeri Zimmerman and Aaron Gorodzinsky, without whom I would never have taken this position.
Thank you for trusting me in this role. I am excited to get started. I hope to make you all proud.
And a sweet and joyous new year to everyone!