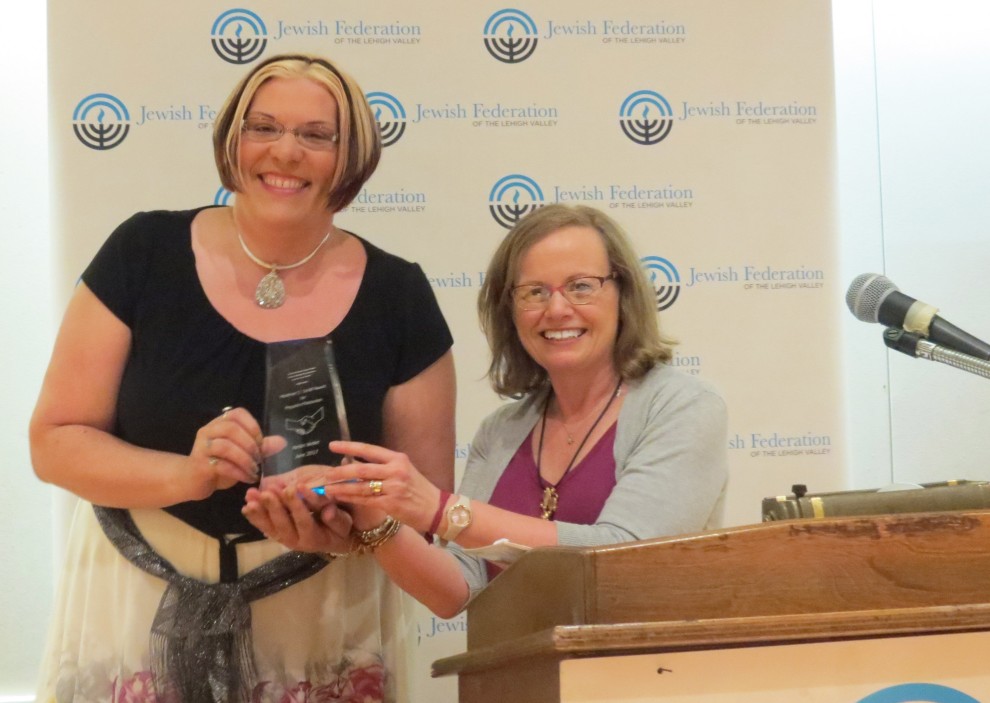 Weller is a 19-year veteran English teacher in the Northampton School District. She has a master’s in education from Gratz College, a writing fellowship from the Lehigh Valley Writing Project, and is currently enrolled at Wilkes University for a second master’s degree in creative writing where she is majoring in fiction.

In 2002, Weller had the pleasure of meeting a Holocaust survivor named Marcel Guindine, whom she invited into her eighth grade classroom to share his story with her students as part of their unit of study centered around the play version of “The Diary of Anne Frank,” the second-most widely translated and distributed text in the world. Through Guindine, she learned of Muhlenberg College’s Youth & Prejudice Workshop. This began a decade-long relationship between Northampton Area Middle School and the Institute for Jewish-Christian Understanding at Muhlenberg. In 2014, when the IJCU underwent a reorganization of sorts, Dr. Peter Pettit asked Weller to join the Youth & Prejudice’s Advisory Board as a public school education consultant due to her continuous involvement through her school district and the student conference over the years.

It was during this time that Dr. Pettit, Marcie Lightwood of the IJCU, Shari Spark, coordinator of the Federation’s Holocaust Resource Center, and Weller began discussing the possibility of creating a satellite event in Northampton once the district’s new middle school was built. Northampton Middle School’s eighth grade enrollment numbers had outgrown the available facilities on Muhlenberg’s campus. Thanks to the collaborative spirits of the aforementioned parties along with Northampton Area Middle School’s staff and administration, the “Learn, Listen, Lead: Honoring the Survivors Among Us” program was born.

The middle school’s first program ran on May 27, 2016, and included 15 speakers from the Lehigh Valley and Philadelphia. Thanks to a grant from the Konkrete-Kids Foundation, the program also included a play presentation by The Diary of Anne Frank Theatre Project hired through the Holocaust Museum and Education Center in Philadelphia. To date, the Learn, Listen, Lead Conference has been presented to 830 student participants and has been offered two times. In April, the 2016 Learn, Listen, Lead Conference was also recognized with a Crystal Award, an award which is part of the Education in Excellence Awards Program offered by Colonial Intermediate Unit 20 for an educational program that connects students, academics, and community members together.

"The history and literature of the Holocaust are among the most effective tools for promoting the lessons of prejudice and tolerance in today’s world," said Spark, the Holocaust Resource Center coordinator. "As a teacher in public education, Kristin Weller has created an environment passionate in its integration of the Shoah. Her objective consistently is to not let the past repeat itself. Her students, her peers and all of us are beyond fortunate to have her expertise and dedication in our community."