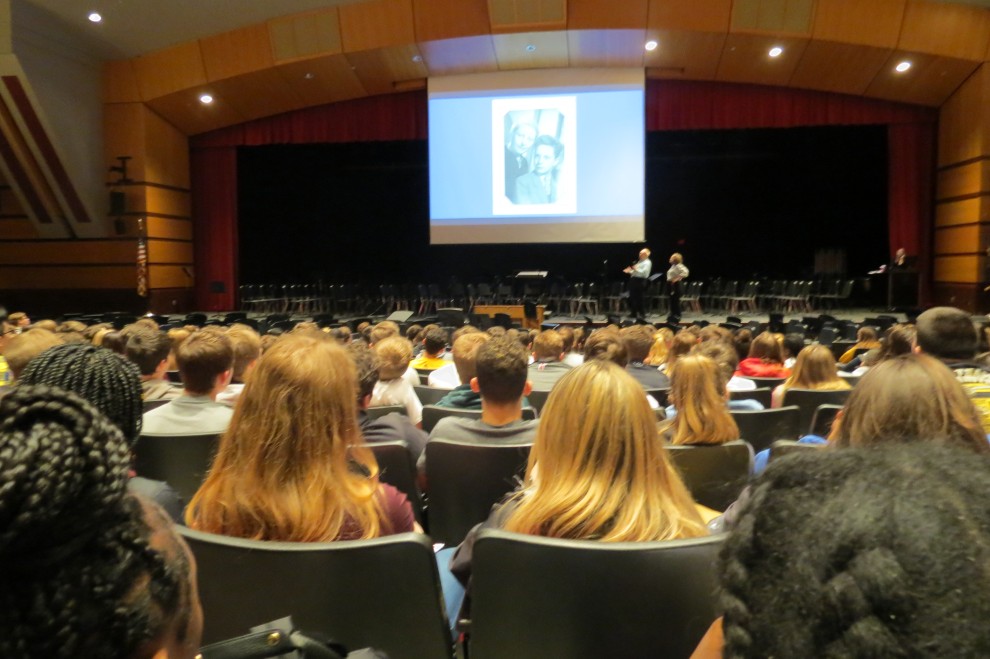 In a large auditorium at Parkland High School, 300 teenagers watched Marcel Guindine gesture with his hands, pointing to a small group of people. “If you were Jewish children in the Holocaust, only you 30 would have survived,” he said solemnly, as pens flew over paper.

Guindine, a Holocaust survivor, spoke to the high school students on April 27, hoping to teach them not just that the Holocaust happened, but that ordinary people like him had to find ways to survive. He was joined by Fay Kun, the daughter of a Holocaust survivor, who shared the story of her mother and her aunts and uncle, who all survived concentration camps.

Both speakers were introduced by Shari Spark, coordinator of the Holocaust Resource Center. This Federation program enables survivors and their families to give testimonies in schools, and also provides exhibits and artifacts that travel around to different schools in the Lehigh Valley. This is increasingly important in a time when few Holocaust survivors remain alive.

“As time goes by, fewer and fewer of the Holocaust survivors are around to tell their story and inform the world of what happened. I try to fulfill my role as a survivor of that nightmare to inform as many people as I can in the hopes of avoiding another Holocaust from every happening again,” Guindine said, explaining why he became involved with the HRC.

At Parkland, Spark’s main message was that the Holocaust did not begin with concentration camps, but rather with systematic devaluation of Jews that led to worse consequences over time. Kun began her story in this way as well, starting with her mother’s life in times of peace and then moving slowly toward the journey to Auschwitz. Her mother was 15 when she was in Auschwitz, around the ages of the raptly listening audience.

Kun told stories of her mother’s guilt, like when her mother lost track of her in line and thought she had been selected to go to the gas chambers, which prompted her to tell the Nazi guard that she was older, and get changed from the work line. She and her two sisters survived together, although she continued to suffer from nightmares from her experiences in Auschwitz and other concentration camps for the rest of her life. Now that she has passed away, Kun considers it her responsibility to carry on their stories.

In terms of the students, her message was simple: step up and stop bullying and other forms of ostracizing that can lead to greater terrors over time.

Guindine, who spoke next, told the story of his Polish mother and his father, a French soldier. When Jews were threatened, his father’s job kept him and his mother safe, even when other Jews who lived in the same apartment building were taken away. When times got too dangerous, Guindine’s mother turned him over to the Red Cross as an orphan before hiding in a carpentry shop. When the war was over, his mother found him in a small town, and they later moved to the United States together.

The two speakers had a profound effect on the students, who were instructed to take notes on their reactions and the elements of each story that compelled them. One student, Thaddeus Graham, said, “They were enlightening. They opened my eyes to how horrible things were in Europe at the time, which is very beneficial to learn about.”

Attending teachers were also enthusiastic about the message. BJ Dugan, who accompanied his students to the assembly, said that “firsthand accounts from both speakers get [the students] to understand what could have happened to them,” which engages them more than reading broad facts from a history book.

“I feel the importance of carrying on the history,” Kun said of the day’s events. “Someone needs to take the torch and keep the story alive so kids can understand the scope of what people went through.”

As for the ultimate message of the day, Kun stated it simply: when a student asked if the Holocaust could happen again, Kun replied, “That’s why we do this.