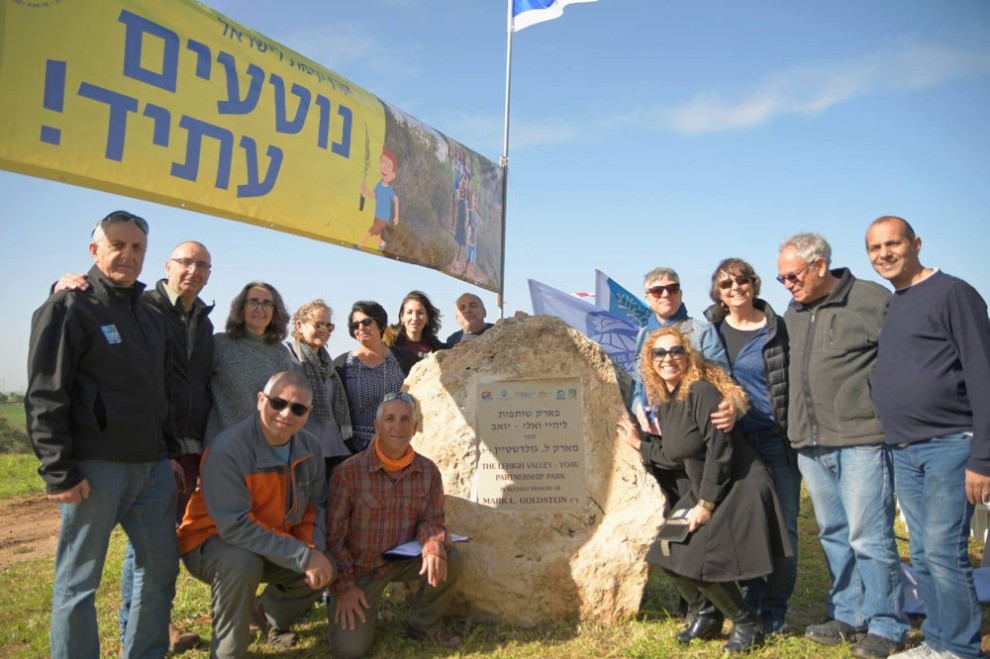 When Barry Halper and Terry Neff first came to visit Yoav, with strict instructions to check us out as a prospective community for Partnership with the Lehigh Valley, it was pretty much love at first sight.

It was clear to all of us that this had every chance of being a very successful Partnership. Our two communities were around the same size, shared many of the same interests and were both absolutely committed to the Jewish and Zionist dream.

Consequently, when we received the official letter of acceptance from the Jewish Federation of the Lehigh Valley, we were thrilled and excited and both of our steering committees sprung into action almost immediately.

Joint video conferences were held to help us get to know each other, and when Rany Trainin (then mayor of Yoav) and I were invited to visit the Jewish community of the Lehigh Valley, Trainin was delighted to discover that the executive director of the Jewish Federation was none other than Mark Goldstein, z”l, with whom he had shared a course of Jewish studies in the U.S.

The Partnership with the Lehigh Valley was, and is, such that families in both communities get to know each other. So it was with Goldstein and Shari Spark and their children.

One of Goldstein’s favorite joint projects with Yoav was the planting and developing of the Partnership Park. However, it was not easy to find the right location, and over the years, the park moved around until, finally, it found its home close to Moshav Nachla in Yoav.

When Goldstein passed away last October, we knew right away that we wanted to do something to honor his memory.

On Friday, Feb. 8, Spark and members of her Israeli family took part in a belated Tu B'Shevat planting with the students and staff of the Sedoth Yoav Elementary School and the re-dedication of the Lehigh Valley–Yoav Park in memory of Goldstein.

The day before the ceremony, it rained, and while rain is always a blessing, this time it raised the fear that the dedication might have to be postponed. But, not to worry, Friday morning dawned with blue skies and shiny green trees and grass. The park looks out on the Nachla and Segula Moshavim and has a clear view of the entire region. With the Yoav Municipality's guarantee of irrigation the whole year round, Goldstein’s dream of a picnic park with shady trees, bicycle paths, a children's playground and much more will now become a reality.

At 9 a.m., a long line of tree planters arrived: the children from the Sedoth Yoav Elementary School, former Mayor Rany Trainin, members of the Yoav Partnership Steering Committee, representatives of the Jewish National Fund, the Jewish Agency and many more. The children presented a musical interlude on mandolins and recorders which suited the occasion beautifully.

Mayor Matti Sarfatti Harcavi spoke movingly about Goldstein, describing him as large in every way – physically, in sense of humor, heart and courage, recalling what a morale booster it was when Goldstein turned up in the middle of the war, concerned to see what was happening in Yoav and how the Lehigh Valley could help.

Spark's short but heartfelt speech touched all our hearts, and the unveiling of the large plaque with the dedication received a loud ovation from everyone.

The park is yet another manifestation of the strong bridge continuing to be built in so many ways between our two communities, and our greatest hope is to welcome more of the Lehigh Valley family to Yoav. Next time you come, we look forward to inviting you to a picnic in the Mark L. Goldstein Friendship Park!