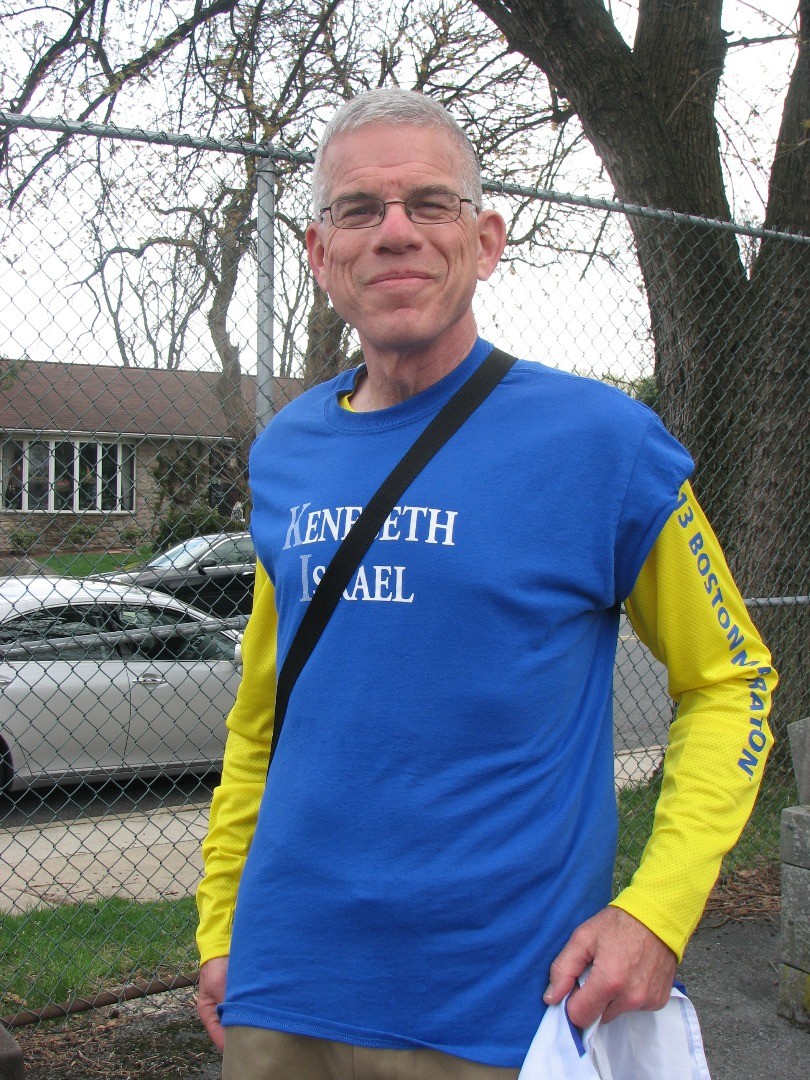 “There are great chaplains, and then there’s Seth Phillips.”

You might think this was a cordial compliment from one of the many clergy who Rabbi Seth Phillips has come to know in Allentown since arriving in 2012 at Congregation Keneseth Israel, where he is to be installed as rabbi on June 13. Certainly Rabbi Seth has touched many people of all faiths throughout the Lehigh Valley, thanks to his participation in inter-faith services and his passionate outreach to all corners of our community.

The quote, however, is not local or recent. It comes from Commander Stephen Schutt, Executive Officer of Naval Support Activity in Naples, Italy in 2009, where Rabbi Seth had served for three of his 20 years as Navy chaplain.

Commander Schutt went on to say, “Rabbi Seth is the guy who is always available for everyone, doesn’t matter the subject or the person, he’s always there. After talking with him, you walk away with a better feeling, and often walk away with a smile on your face.” How available? Todd Green, a civilian engineer with Naval Computer and Telecommunications Naples was a practicing Buddhist who often sought Rabbi Seth’s guidance. “If there are Buddhists in Italy, they’re hard to find,” Green said. “I went to him for spiritual counsel, or just an ear to listen.”

Where did this story of Navy Chaplain Phillips begin and how did he come to call Allentown his home?

Born in Brooklyn, New York, his family soon moved to Richmond, Virginia, where he grew up and eventually attended the Douglas S. Freeman High School. Prior to graduation in 1970, young Seth Phillips took a career aptitude test known as the “Strong Interest Inventory” which remarkably told him that he would be good at two things: the ministry and the military! Inspired by having the thrill of meeting Moshe Dayan after the Six Day War, Rabbi Seth majored in history at Penn State and began his rabbinical studies in Jerusalem at the Hebrew Union College in 1973.

No doubt growing up in Virginia, moving to Pennsylvania, studying in Israel and completing his rabbinical studies in Cincinnati, Ohio, would be quite the itinerary for most young adults; however, this is where Rabbi Seth’s story only begins to take the world stage.

Though still holding an interest in the military, Rabbi Seth began as a pulpit rabbi first in Ohio for two years and then made the extraordinary move to lead a congregation in Melbourne, Australia, for the next eight years. At the time, Australia’s Jewish population was approximately 35,000, mostly Ashkenazi Jews, many of them refugees and Holocaust survivors who arrived during and after World War II.

Rabbi Seth returned to the States in 1989, settling in Naples, Florida, where he led the only synagogue in town for three years. But the winds of change, chance and good fortune were about to bring all of his passions together, seemingly overnight.

The First Gulf War -- Operation Desert Storm -- captured the world’s attention from 1990-91. For the first time since the troubled military atmosphere of the Vietnam era, patriotism and honor for our now volunteer servicemen and women was at an all-time high. The Iranian hostage crisis was a distant memory. Doing the right thing for the world, protecting American interests abroad -- including our unwavering support for Israel -- was once again the focus of U.S. foreign policy.

Approaching a birthday with a zero, Rabbi Seth received a simple postcard from a Navy chaplain inviting him to consider serving Uncle Sam and Uncle Moses. At age 40, Rabbi Seth received his U.S. Navy commission and would spend the next three years at Camp Smedley D. Butler in Okinawa, Japan, where more than 10,000 Marines were based.

It was in Okinawa at the age of 42 that Rabbi Seth found two new passions. First, he became a marathon runner; second, in doing so, he found a way to connect and bond with people of diverse cultures and faiths. An island that had been known tragically for its history of war had now become a beacon of peace, solitude and inspiration for Rabbi Seth. So much so that after completing his three-year commitment to the Navy, Rabbi Seth decided to “re-up” for a career that would literally take him to all of the corners of the world.

Lieutenant Commander Rabbi Seth Phillips would become the first Jewish chaplain to serve on a Navy destroyer. DDG-51, USS Arleigh Burke was a guided-missile destroyer that was part of a squadron of five ships that served on a fleet to protect the USS Dwight D. Eisenhower, a nuclear aircraft carrier. With few to no Jews on board and no other clergy, Rabbi Seth worked with Catholic and Protestant lay leaders on these ships to meet the religious needs of all sailors.

On a Mediterranean deployment, Rabbi Seth was invited to the carrier to offer the “Evening Prayer at Sea” from the bridge. Imagine the scene of pitch black darkness at sea, sailors praying for peace and missing their loved ones at home, interrupted every 23 seconds by a fighter jet taking off or landing. As spoken to the sailors at the time and as he continues to reiterate after saying Kaddish in Allentown for today’s military casualties, “No greater love a man hath this, but to lay down his life for his friends.”

Back from sea, Lieutenant Commander Phillips would go on to serve as the Jewish resource for deployed Marines in Iraq on three occasions. Memorably, in April 2005, he led a Passover seder in Bagdad and met up with his son who was then serving in the Virginia Army National Guard. Gathered in dusty rooms, at tables set with plastic plates and paper cups, Rabbi Seth gave our brave men and women the opportunity to reconnect with their Jewish heritage, far away from the safety of their families and synagogues at home.

As mentioned above, it was now on to Naples, Italy. While in Italy, two special story lines continued to emerge -- his respect for human diversity and his passion for marathon running.

In December, 2006, Rabbi Seth shared our Chanukah tradition with Christians in Naples by making 10 dozen latkes. He was the invited guest speaker by the Military Council of Catholic Women to speak at their chapel. In spite of the group’s name, 40 men, women, and children attended to hear Rabbi Seth teach the story of Chanukah.

“We can share in each other’s cultures without compromising who we are, without losing our identities,” Rabbi Seth was quoted as saying at the time. Army Sergeant Major Rozenia Carter, a Catholic member of the group, was quoted in Stars and Stripes saying, “I love the Jews, for they are God’s chosen people. I’m here because I heard Rabbi Seth was speaking.” Rabbi Seth’s passion for cultural understanding and acceptance continues to flow from his heart to this day.

And speaking of his heart, while stationed in Italy, Rabbi Seth kept his passion for health by joining the “Espresso Harriers,” a local running club that met at 6 a.m. daily and jogged in and around Naples. Perhaps this explains how he received his last and perhaps his most interesting assignment in the Navy. After heading for his last three years of service in Annapolis, Maryland, the U.S. Naval Academy named him the first rabbi ever to serve as chaplain of the Navy football team.

Rabbi Seth didn’t just come to Navy football games; he attended all of the practices. He was a constant presence, always extending his encouragement to the players. Only one player on the team was Jewish, Erich Mahler, a sophomore guard from Old Bridge, New Jersey. But once again, the team accepted and loved Rabbi Seth. They were particularly touched when he taped a pregame message for their game against Southern Mississippi that happened to fall on Yom Kippur. The holiest day on the Jewish calendar may have kept Rabbi Seth physically away from the game, but the players knew he was there in spirit. The Navy football head coach, Ken Niumatalolo, a Mormon, was quoted as saying, “All the chaplains have been great, but Rabbi Phillips is different.”

Different, indeed … Although it came time to retire from the Navy, Rabbi Seth was not about to retire from his passions for teaching Judaism, community service and helping those in need of spiritual and emotional understanding and support.

Former Congregation Keneseth Israel Rabbi Donald Berlin, now retired in Annapolis, Maryland, reached out to Rabbi Seth to consider the role of interim rabbi at KI in Allentown. The location was ideal as his wife Marge loved New York City and had hoped to spend more time there. But what truly drew Rabbi Seth to take on this new challenge was his need to continue to work in a team setting. After only a few meetings, it was apparent to Rabbi Seth, KI board members and the congregation that all of his passions for teaching, community, diversity and team play would continue well in his new spiritual home on Chew Street in Allentown.

To say that Rabbi Seth has raised the spirits of Congregation Keneseth Israel and of the community is an understatement. His passion transcends all religions and cultures, as he continues to break down barriers by organizing and participating in interfaith services as well as a vast array of diverse cultural community events.

As for me, I have a smile on my face as I drive to the hospital at 6 a.m. each morning knowing that Rabbi Seth is out there somewhere running his miles though the community that I, too, have come to love and call home.

The symbolism is quite personal for me. Rabbi Seth and I have enjoyed many wonderful conversations about both physical and spiritual health. Indeed, as a cardiac surgeon I know that the heart is more than just a pump that keeps blood circulating in our bodies. It is the symbol of the love that we share with our families and our faith community. While I can repair a heart with sutures, Rabbi Seth knows how to nourish it with spirit and love.

Dr. Raymond Singer is Chief of the Division of Cardiothoracic Surgery and Vice Chair for Quality and Patient Safety at Lehigh Valley Health Network. He is a past board member for Congregation Keneseth Israel.