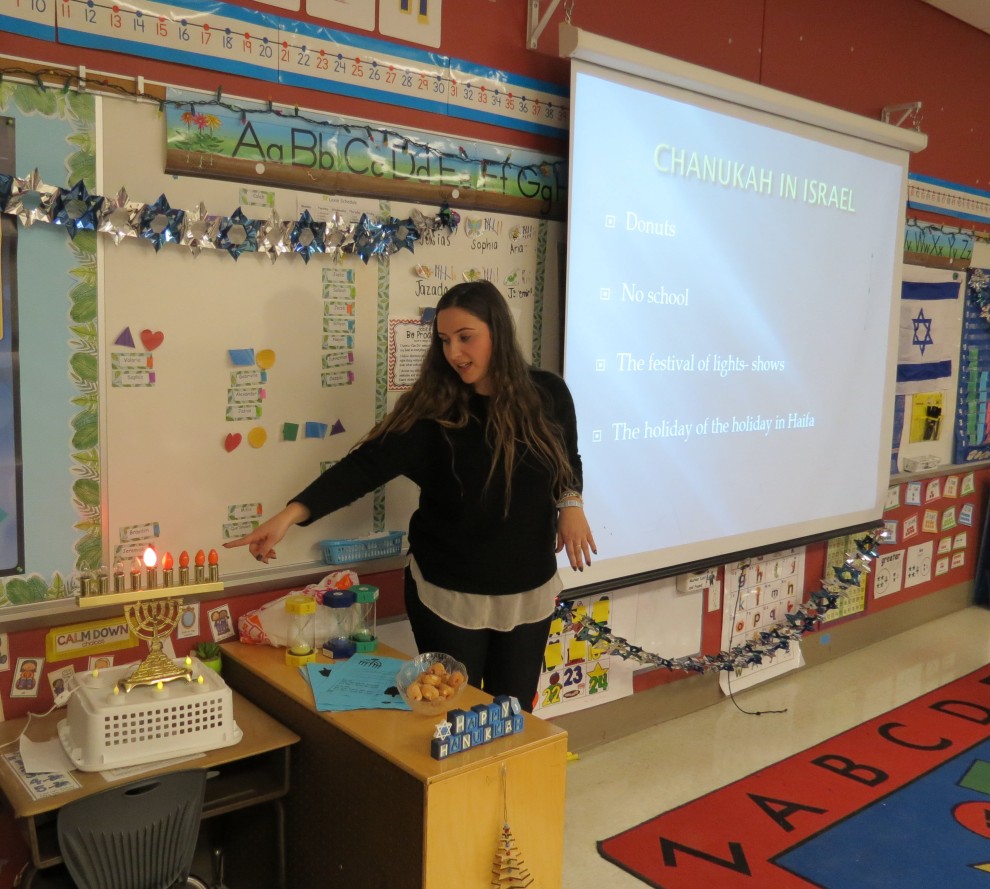 Room 116 of Roosevelt Elementary School was transformed from a kindergarten classroom into a Chanukah wonderland on the evening of Dec. 5. Dozens of menorahs and dreidels decorated the space as part of the Allentown school’s annual holiday showcase, “Winter Celebration: Holidays Around the World,” open to students and their families to learn winter holiday traditions from several different countries.

When Chelsea Karp, volunteer coordinator of Jewish Family Service, was invited to represent Israel, she in turn invited community shlicha Rotem Bar to join her in teaching the children about Chanukah and how it is celebrated in Bar’s native land. Together, they set up an immersive experience as part of the night that also featured activities from Russia, Greece, Pakistan, Syria, Puerto Rico, the United States, and the Celtic region, which over 330 people from the Allentown area attended.

In the Israel room, Karp greeted the young visitors. “Come meet my friend Rotem!” she told them as she led them inside. “She’s from Israel!” At the first station, guests were asked “What is the light of your life?” for an interactive poster filled with construction paper candles. “Family” was the number 1 answer that the children wrote in. Then, the symbolism of the colorful menorahs, dreidels and gelt on display at the next table was explained.

Following this, Bar gave a short presentation showing visitors where Israel is on the map and telling the story of Judah Macabee. She also educated the crowd on the traditions of Chanukah—everyone was very interested in the doughnuts but less impressed to hear that receiving gifts is not the prevailing custom in Israel.

Then, Bar and Karp passed out papers printed with the prayers they were about to sing so that the families could see what Hebrew writing looks like. As they sang, they lit up four of the bulbs on an electric menorah for the fourth night of Chanukah.

Last but not least was a dance lesson. Following the steps from a video, Bar and Karp led the children in stepping and clapping along in a circle to Hebrew music for an Israeli folk dance. After that, everyone was offered a jelly-filled doughnut hole on their way to the next country and wished a “Chag Sameach!”