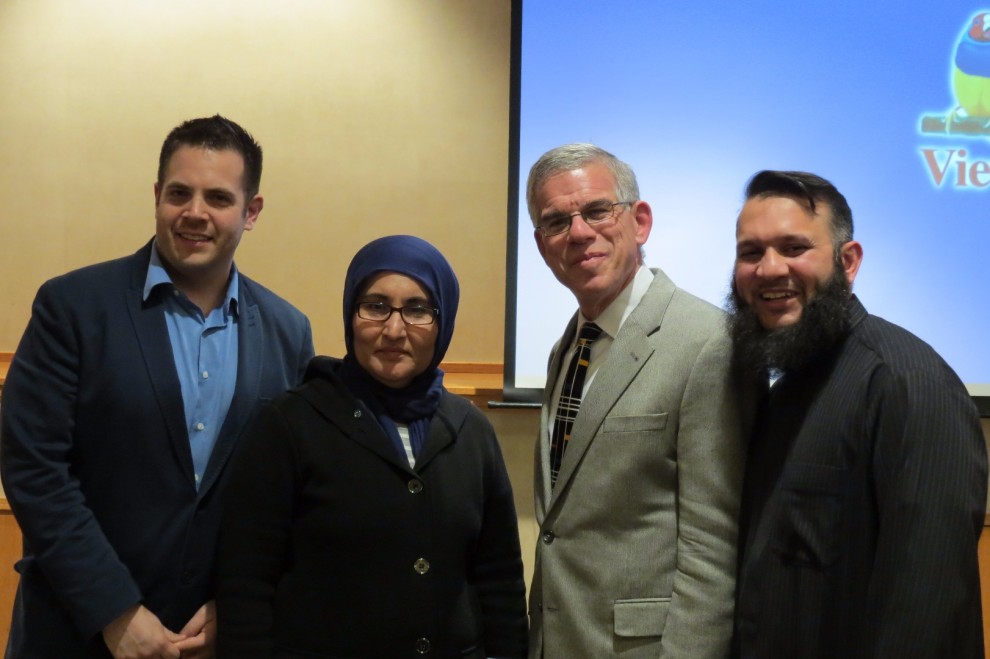 On Nov. 8, a crowd of over 200 people gathered at Congregation Keneseth Israel to learn about the status of women in Islam. The featured speaker of the evening was Rubina Tareen. Originally hailing from Pakistan, Tareen works as an interfaith chaplain at Alvernia University in Reading. The event was co-sponsored by the KI Adult Eduction Committee and the Federation’s Community Relations Council.

Tareen prefaced her talk by saying that, like all religious groups, Islam is not monolithic, and her views were not necessarily representative of all Muslim women. Despite this caveat, she explained that her experience as a Muslim woman living in the United States was pretty typical of the women she knew.

She showed pictures of her family, her American husband who served in the Army, her two sons and three daughters and her Japanese daughter-in-law all smiling together broadly, a living representation of the American melting pot. She talked about her children’s jobs working in fields as diverse as the tech industry and nonprofits, and her pride in their accomplishments was palpable.

After explaining her background, Tareen continued by discussing the historical role of women in Islam. She stressed that pre-Islamic society was extremely harsh toward women; one of the first dictates of the prophet Muhammad was that parents should no longer kill their infant daughters out of shame, but should celebrate their birth. She also pointed to Quranic figures like Khadijah, the wife of Muhammad, to describe the traditional role of women within Islam. Khadijah was not only 15 years older than her husband, she was also initially his employer.

The final part of her presentation focused on modern misconceptions about Muslim women, mostly centered on their oppression and submissive qualities. She gave examples of Muslim women leaders like Benazir Bhutto of Pakistan and Begum Khaleda Zia of Bangladesh, pointing out the intelligence and accomplishments of Muslim women around the world.

She also dispelled myths about the hijab, the head covering that many Muslim women wear. She reiterated that the Quran states that all Muslims should dress modestly by covering their arms, legs, and hair. the amount of covering and the style worn is a cultural difference that varies from country to country.

After Tareen finished speaking, Brother Rizwan Butt of the Muslim Association of Lehigh Valley followed up her comments with a short presentation detailing the specific instructions regarding the role of women in the Quran and in Islamic teaching.

Both Tareen and Butt answered questions after their presentations, from whether they were offended by non-Muslims wearing the hijab as a fashion statement (no), to what they thought of feminism. Tareen answered that while she did not consider herself a Western-style feminist, she appreciated the efforts of feminists. “It is important that we fight for our rights as women,” she said.

Rabbi Seth Phillips was pleased by not only the impressive turnout for the event, but also the diversity of the attendees. Jews, Muslims, and Christians were all present to meet each other and learn more about each other’s faiths. “We are fortunate to live in a country where this kind of event is possible, where we can meet each other with a message of peace,” Phillips said.