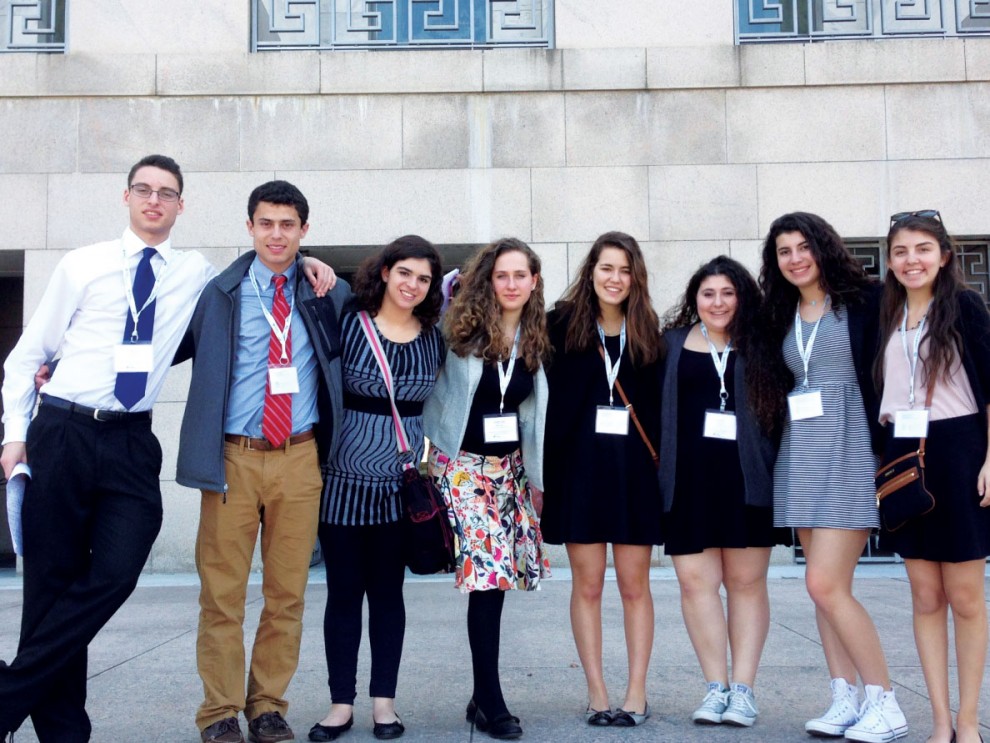 The alarm clock sounded at 4:30 a.m. exactly on that Sunday morning. Not many students would submit to this kind of torture, but Allentown Shalshelet attracts a special kind of student. We got up two hours before the crack of dawn to travel to Washington, D.C., and learn to lead our Jewish community with greater political skill.

Shalshelet is the Jewish enrichment program for all Lehigh Valley Jewish teens. We spend two evenings a month discussing issues that we feel are important such as Jewish identity, Israel, body image, ethical decision making and many more topics that are important to us as Jews and as teenagers. Our group is comprised of teens with varied backgrounds and beliefs, which makes for lively discussions covering many perspectives. Recently, we were given the opportunity to participate in a three-day Panim el Panim seminar in Washington which required us to rouse ourselves so early on a Sunday morning.

When I decided to sign up for the Panim El Panim seminar, I never thought I’d find myself traipsing along the sidewalks of Washington, searching for a homeless person I could exchange pleasantries with. Street Torah was the action aspect of the seminar, where we focused on dealing with problems from political and philanthropic perspectives, learning that efficiency thrives on thoroughness. I had feared this particular part of the trip, and had seriously considered waiting around the hotel until the next speaker arrived and staying behind altogether. I was scared about being vulnerable in a different environment, and I thought to myself that the experience cannot possibly be worth it, but I was wrong. Something inside me – Jewish guilt, fear of judgment, my mother’s voice to get myself together and just do it already – pushed me out onto Capitol Street.

It was windy and getting cooler as we walked, determined to find, interrogate, and bequeath a meager pair of socks to one of Washington’s many homeless people. Finally, we saw a man across the street sitting by a tree. He was quite young and wore a U.S. Army cap.

I have wanted to be a veterans’ doctor for four years. It is a passion I owe to my parents (who are both physicians) and my grandfather who fought in World War II for the Americans as a translator for Hideki Tojo during his war trials. This young man who I saw across the road was exactly the kind of person I have always dreamed of being able to help, and now was my chance. Strangely, I wasn’t afraid at all anymore, because I felt like I knew this man; he was a veteran, just like my grandfather. I volunteered to walk over to him with Coral, another student, and slowly the others followed, since we were advised to approach the homeless in small groups so as to not make them feel threatened.

No longer burdened by apprehension, I walked over to the young veteran, stopped just a few feet from where he was sitting and read the cardboard sign that said “Fought combat in Iraq and recently homeless. Thank you, will pay it forward.” Suddenly, it became a little hard to speak. Now was the moment – I had to say something otherwise he’d think I was just some crazy girl staring at him from an awkwardly close distance.

“Hello.” It was the best I could come up with.

“What is your name?” Maybe I had asked for too much, why should he tell me anything?

“Jonathan,” he said, looking me in the eye and smiling.

“Do you want some socks?” Coral asked him. He looked a bit confused and then saw the cloth bag in my hand full of socks, gloves and a Kind bar.

He ran his hand through his hair and glanced behind him at his pile of possessions.“Sure,” he said after a pause, “you can never have too many.”

Coral handed him one pair and I the other, and then, feeling so disgustingly inadequate, I found the one granola bar I had decided to bring and placed it in his hand. I have never seen a person so pleased to see a granola bar, and I will never forget it.

“I’m really grateful,” he said looking at Coral and I.

“Oh no,” I interrupted, “we are the ones who are grateful, sir.” He involuntarily inclined his head in thanks, his face serious. “Thank you for your service,” I said not wanting to leave this deserving man with a superfluous pair of socks and a melting Kind bar. Coral and I walked back to the group and out of the corner of my eye I saw another young man pass Jonathan and give him some money from his pocket. I still worry about Jonathan.

The Panim El Panim seminar taught me to call on a special kind of compassion I didn’t know I would be able to summon. It inspired all of us to grow not just as students, but also to mature as empathetic and capable humans. When faced with a problem, we were encouraged to come to our conclusions built on the fundamentals that we uphold as Jewish American teenagers. On Monday, March 30, we acted on those ideas in the streets of Washington, and not only did it enrich our experience of Washington, but I believe it enriched our experience of ourselves.